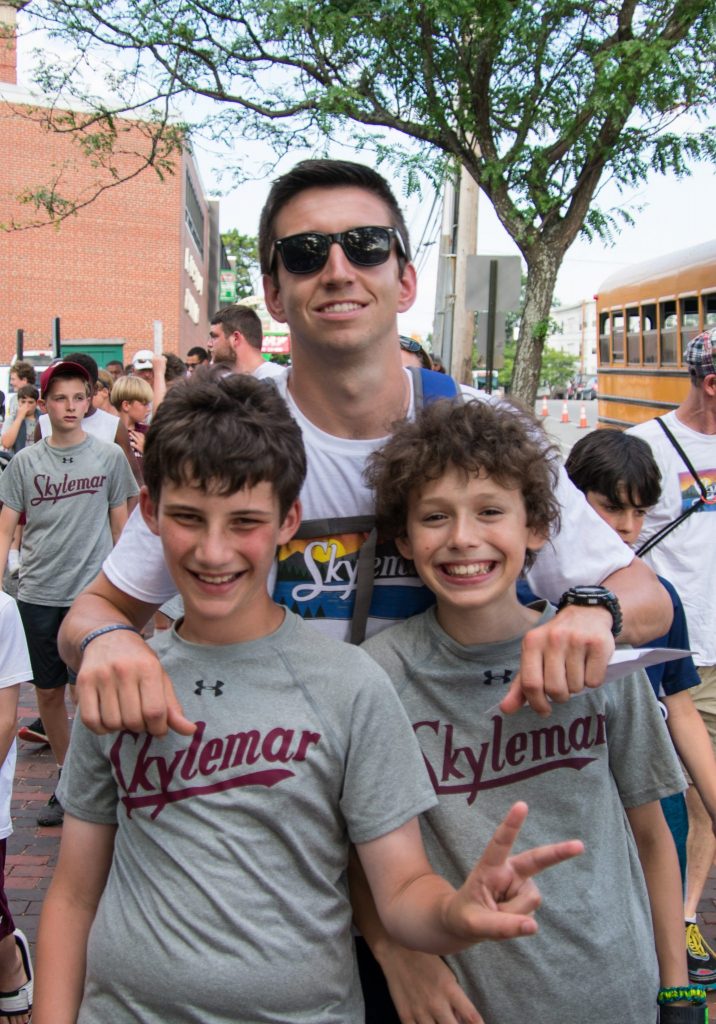 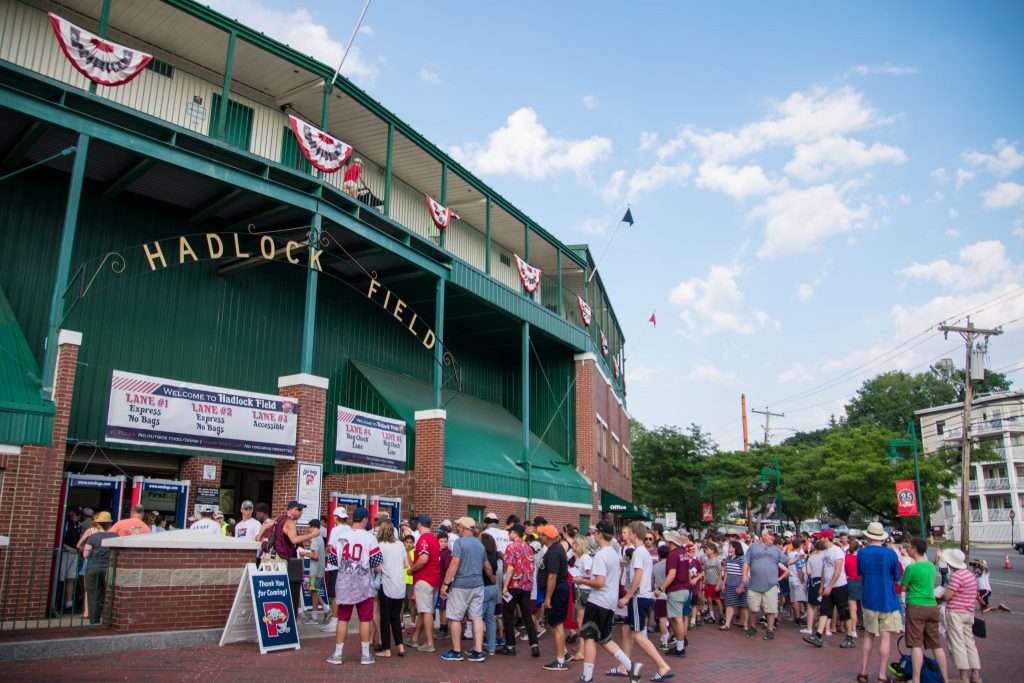 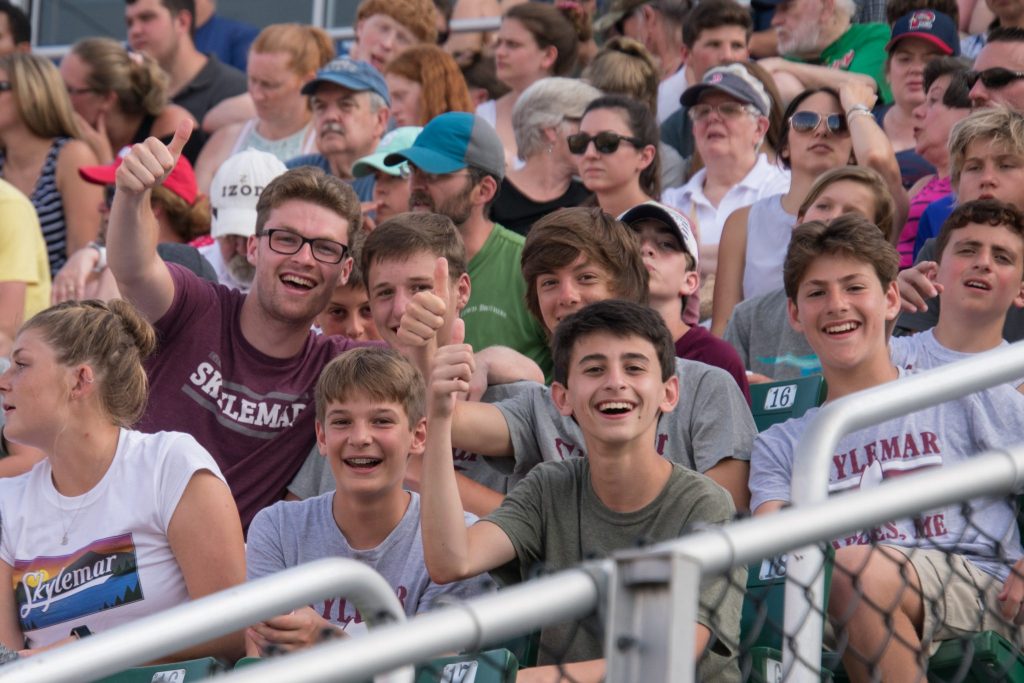 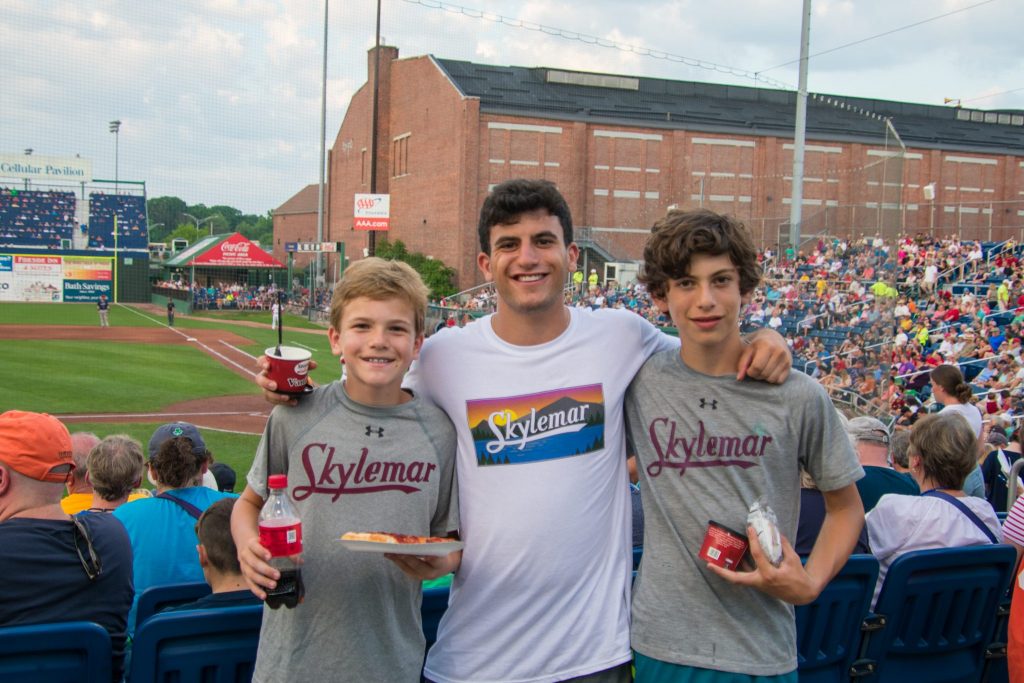 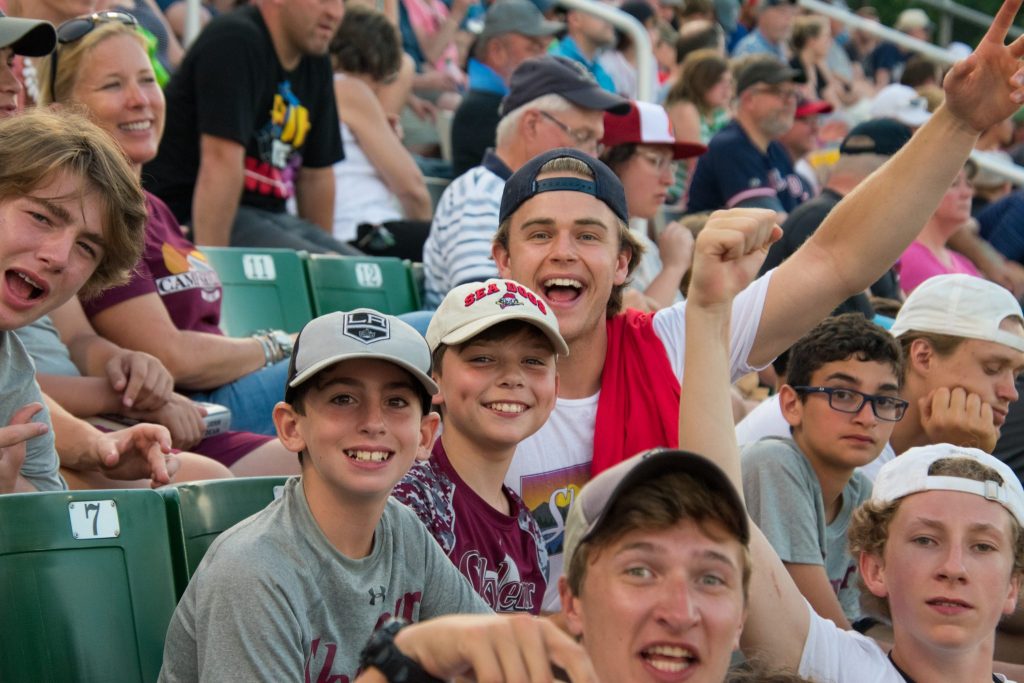 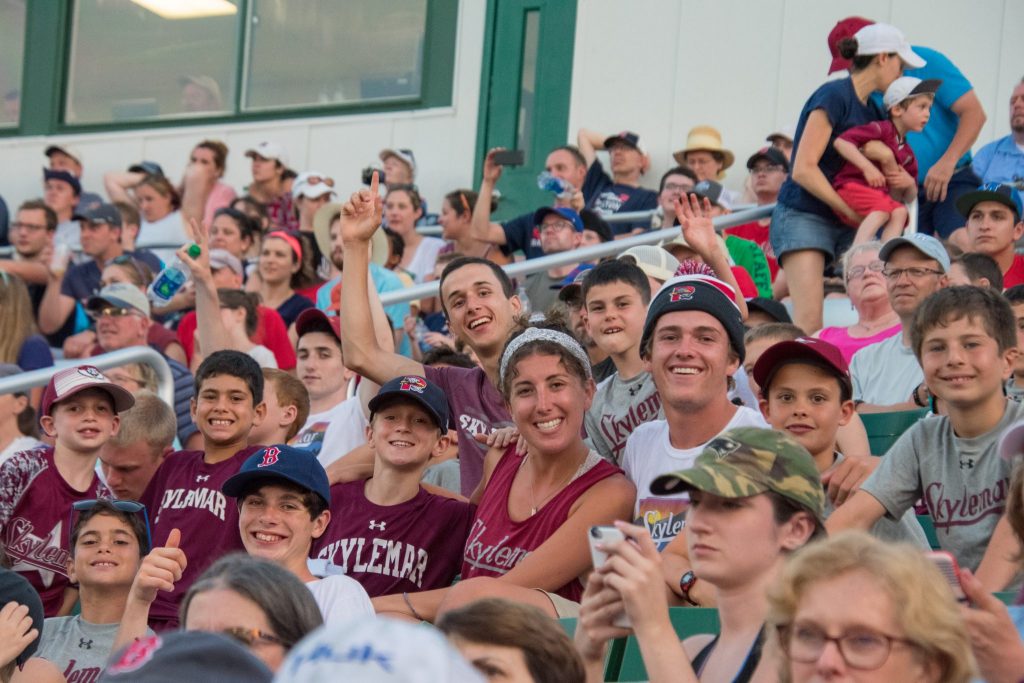 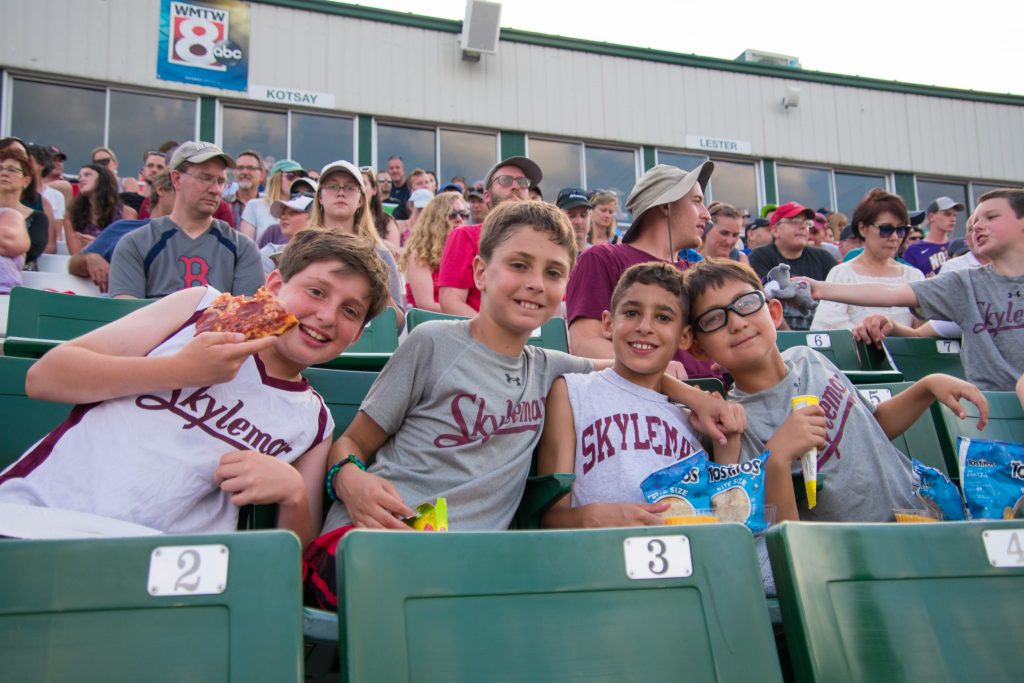 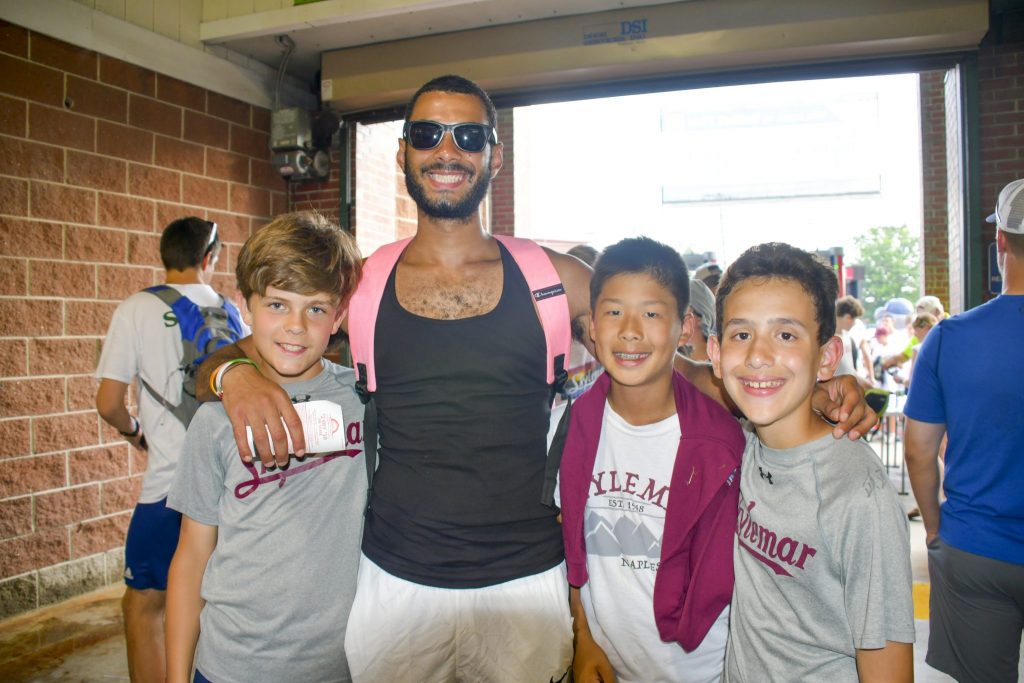 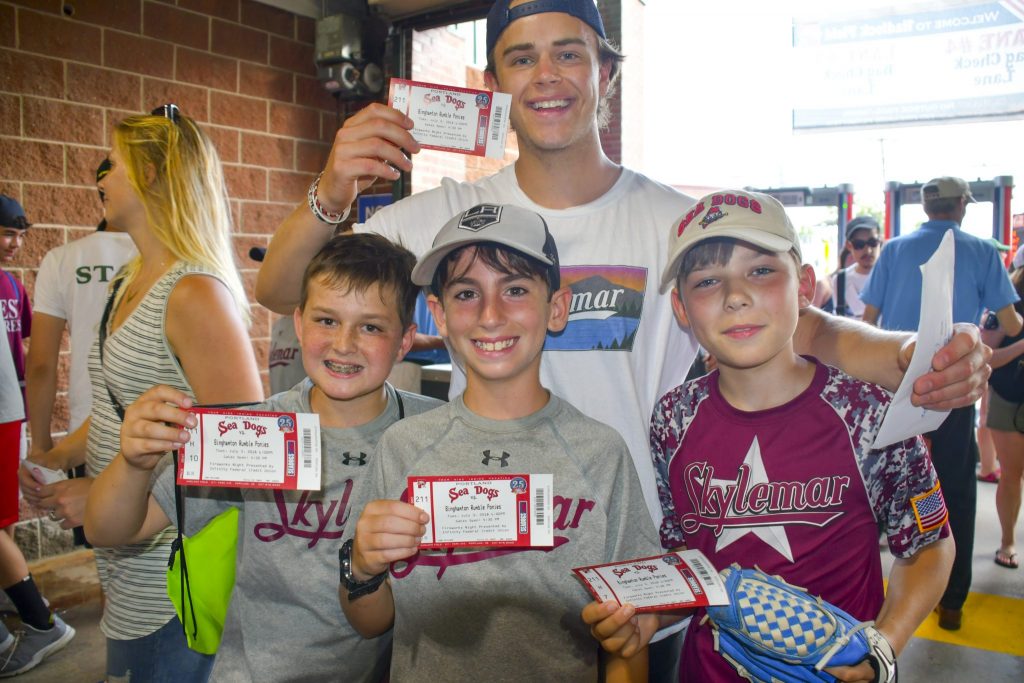 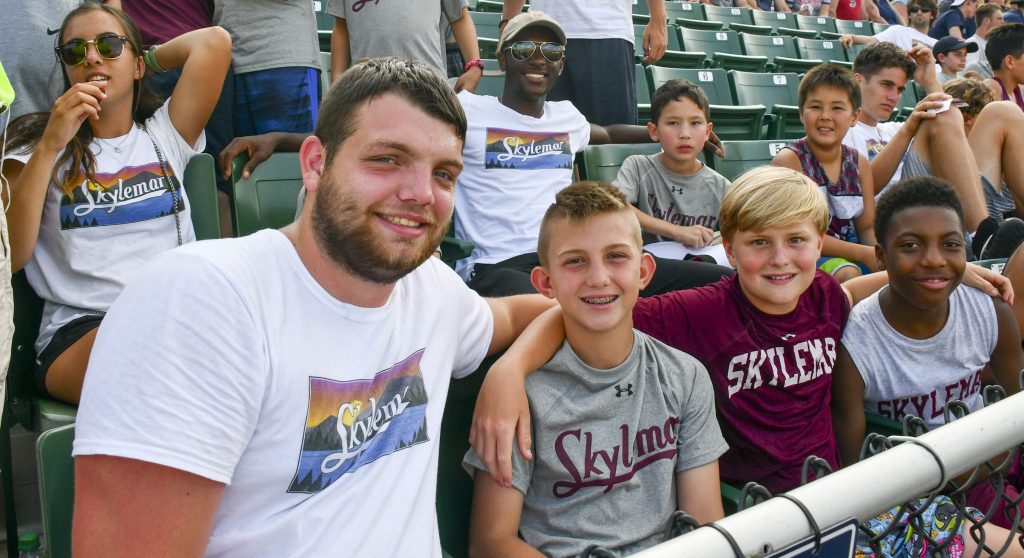 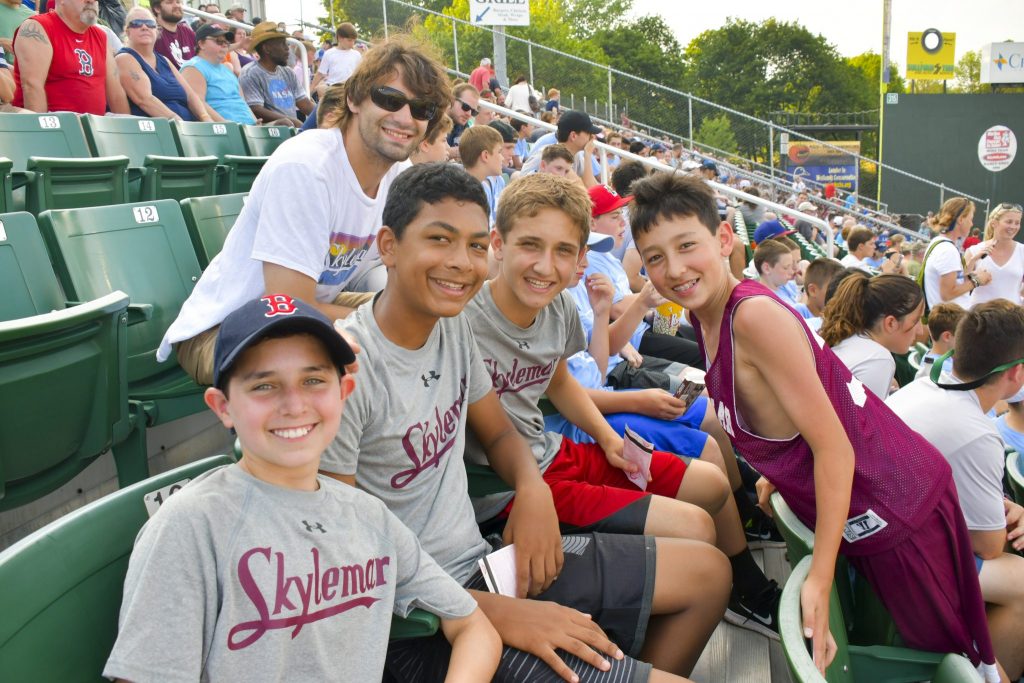 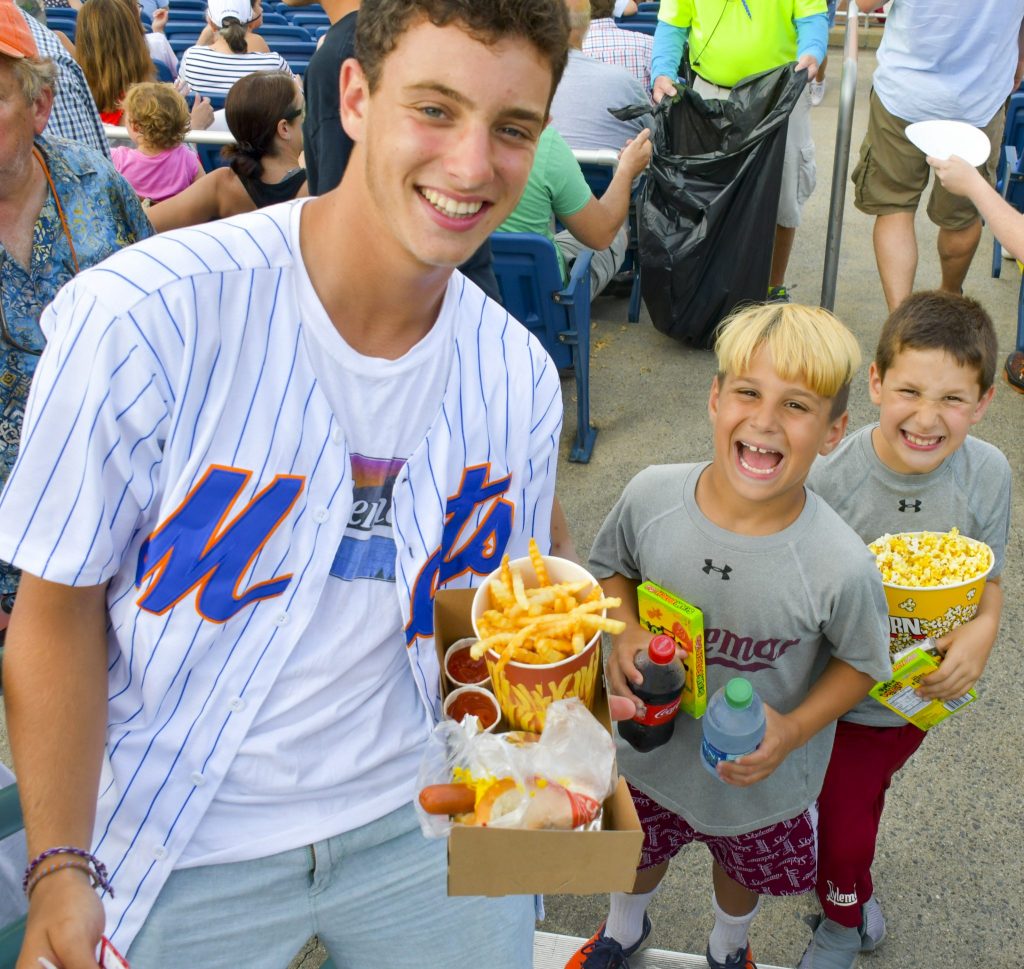 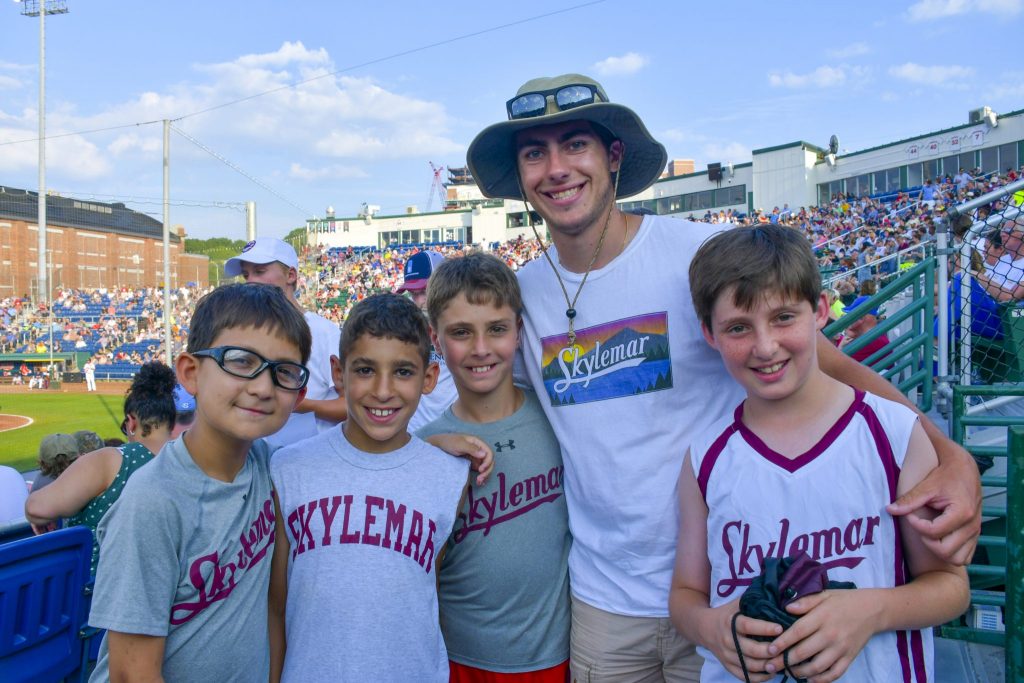 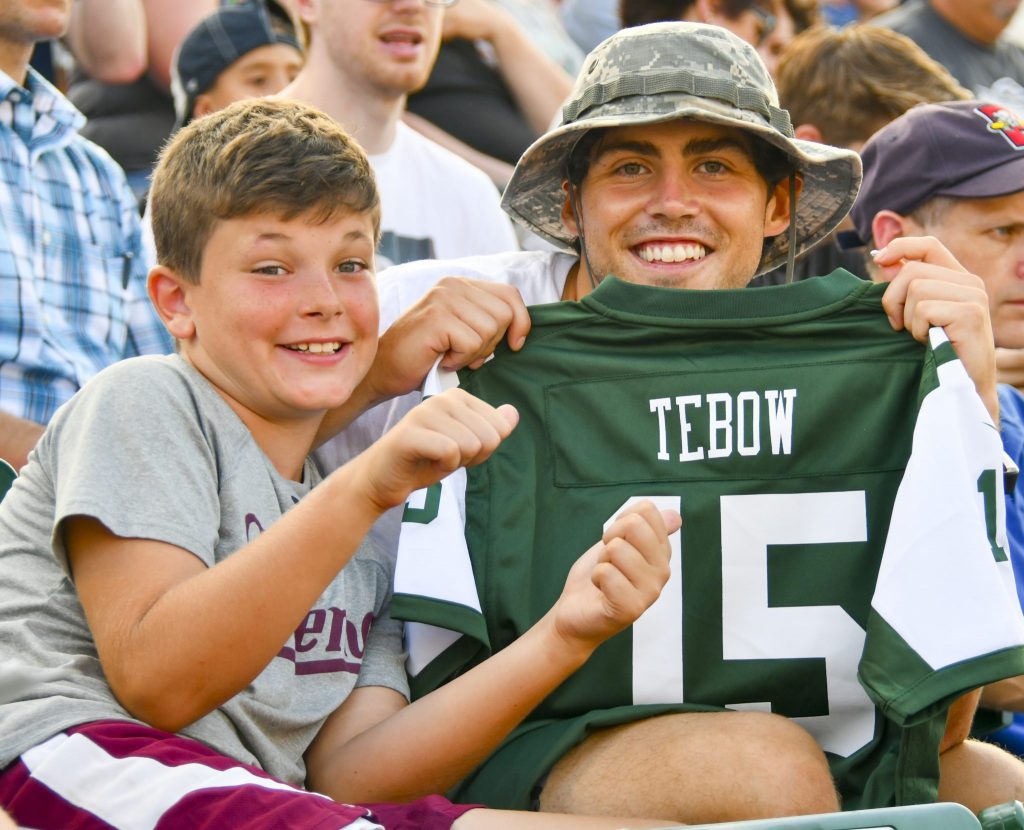 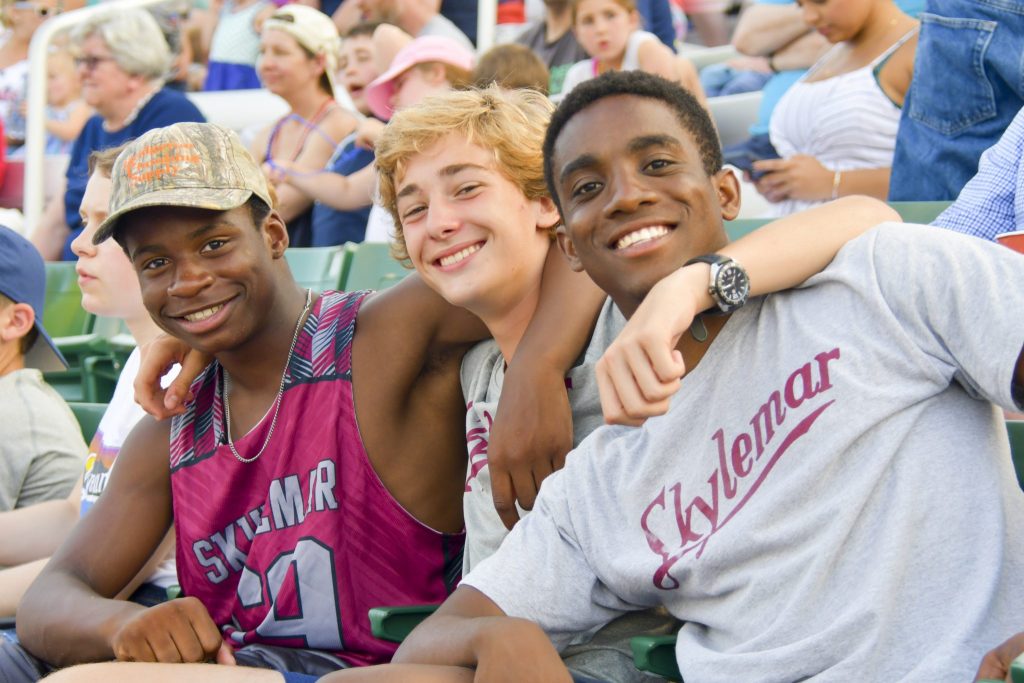 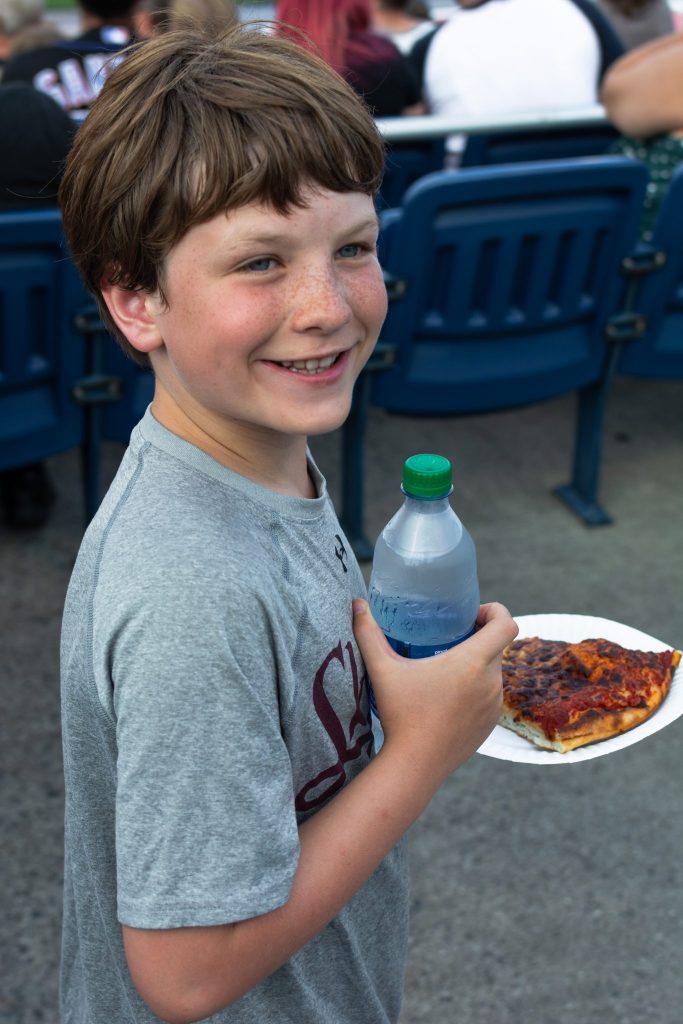 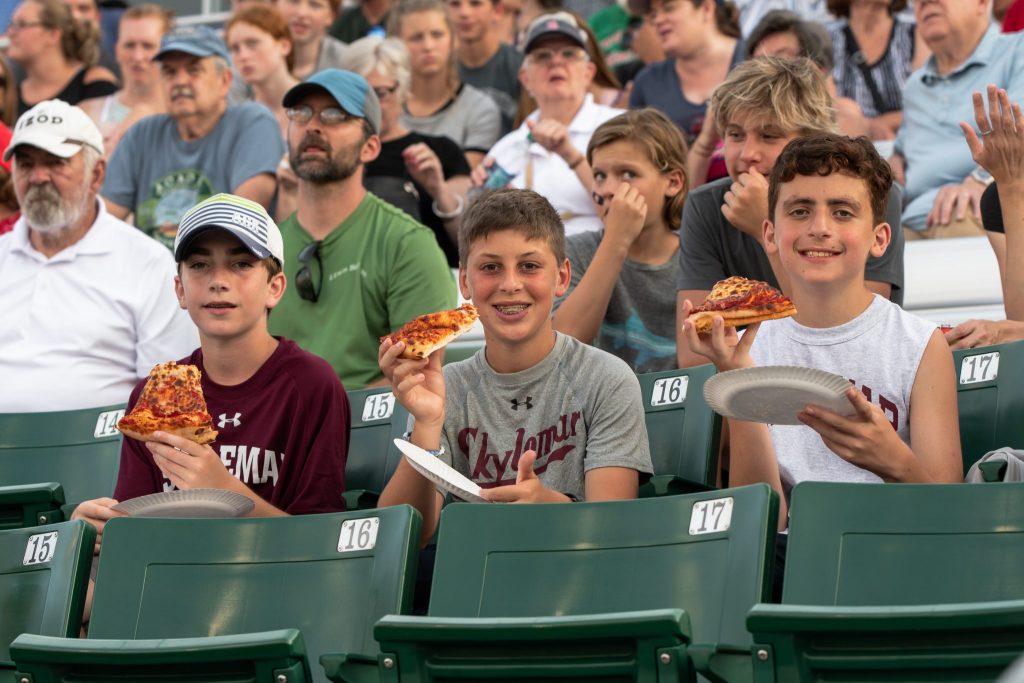 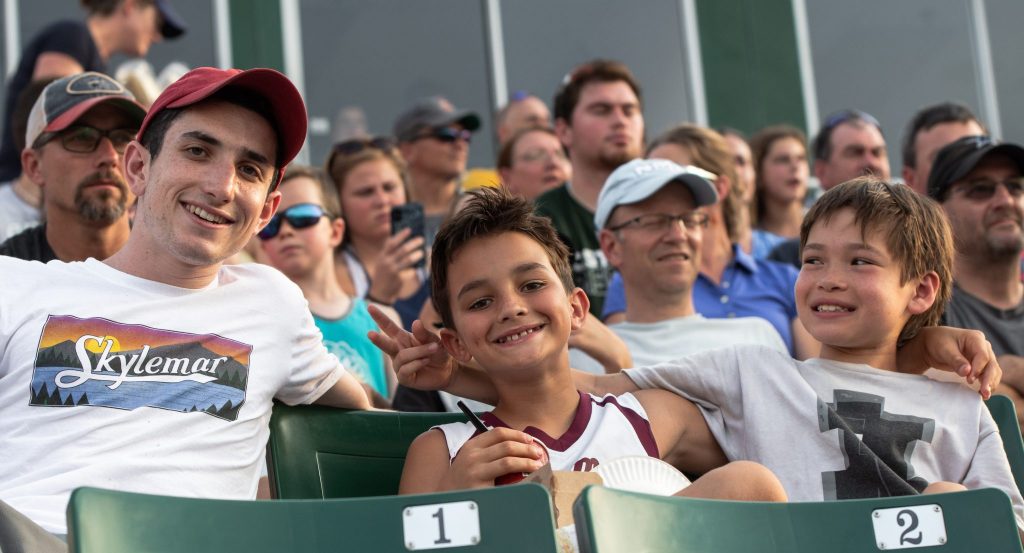 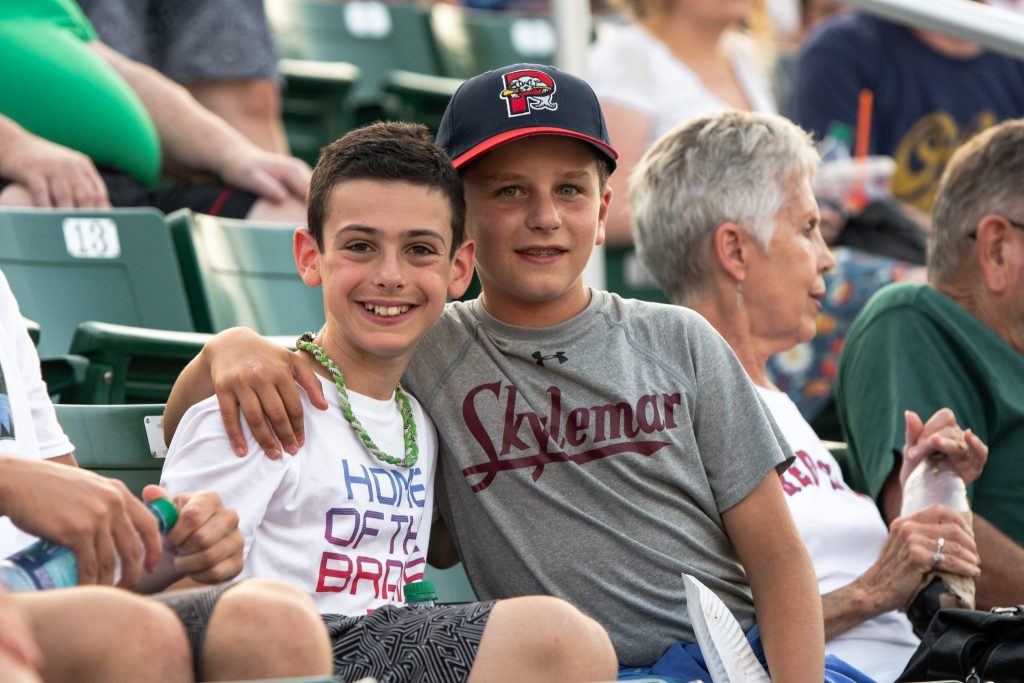 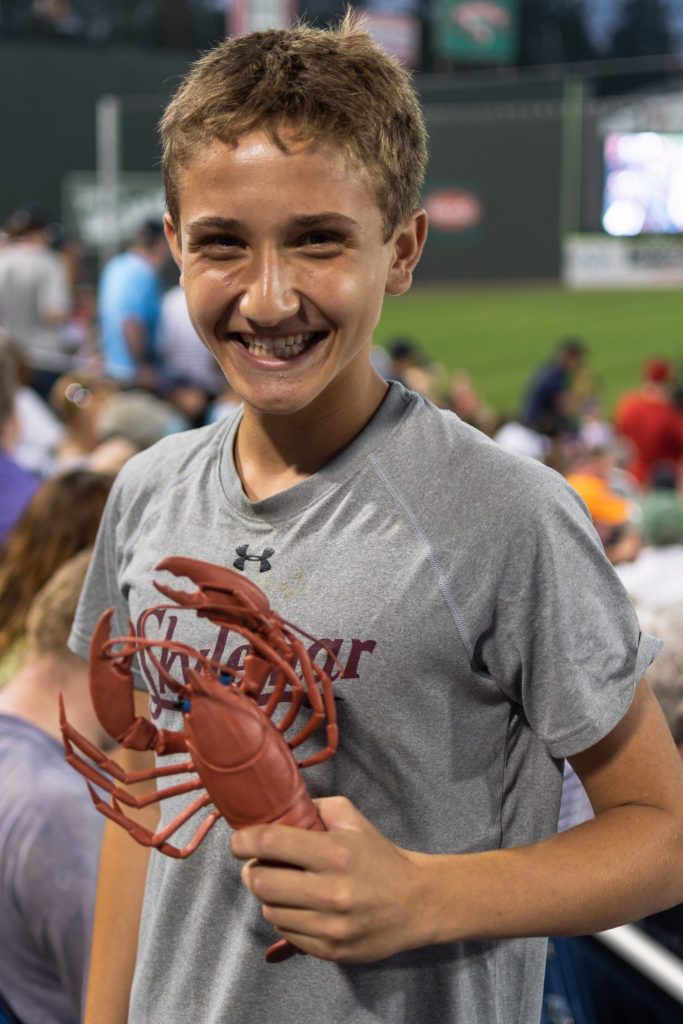 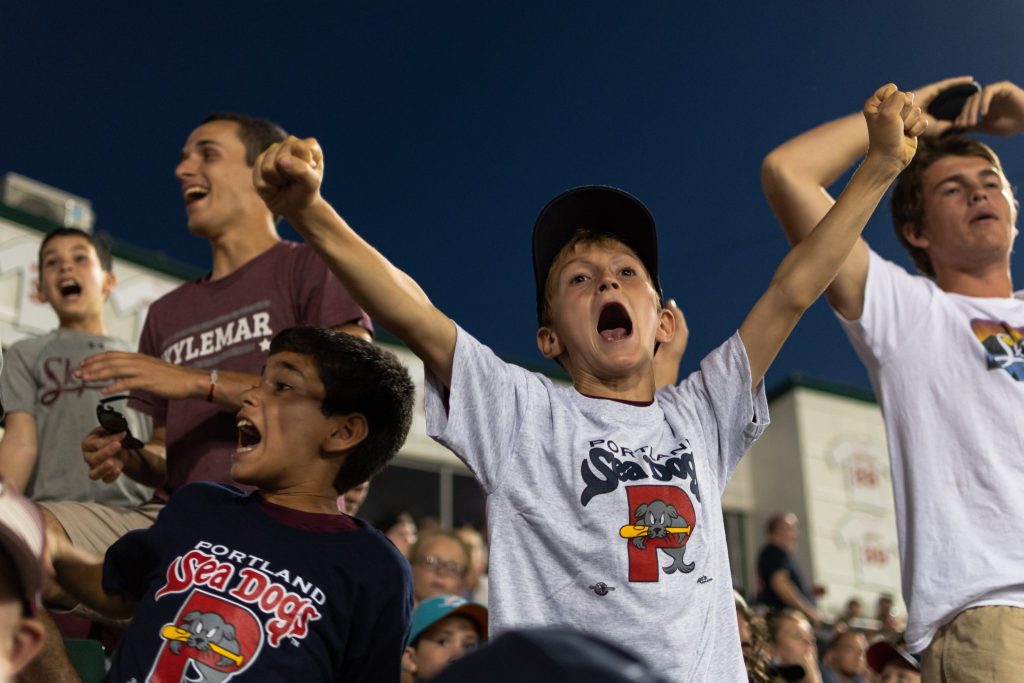 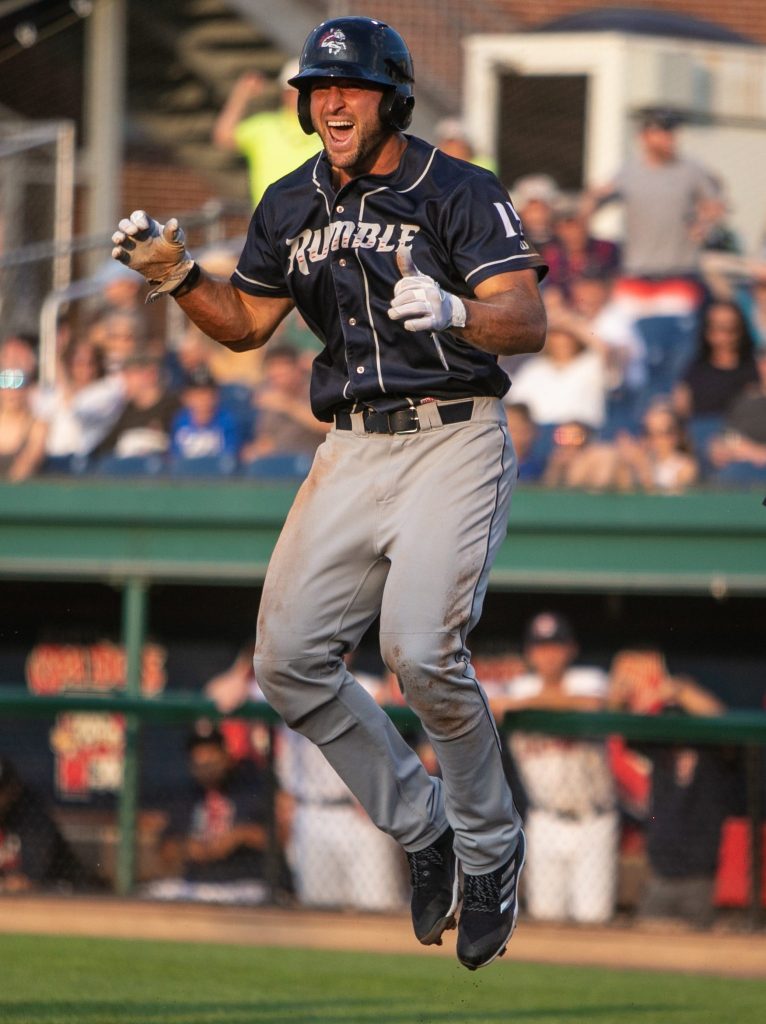 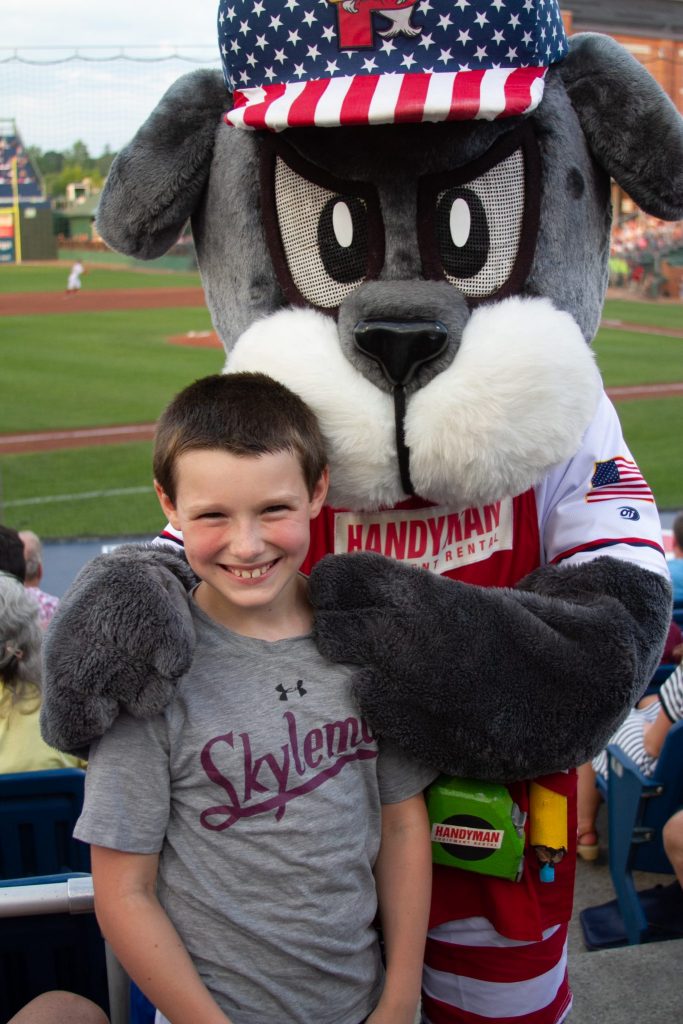 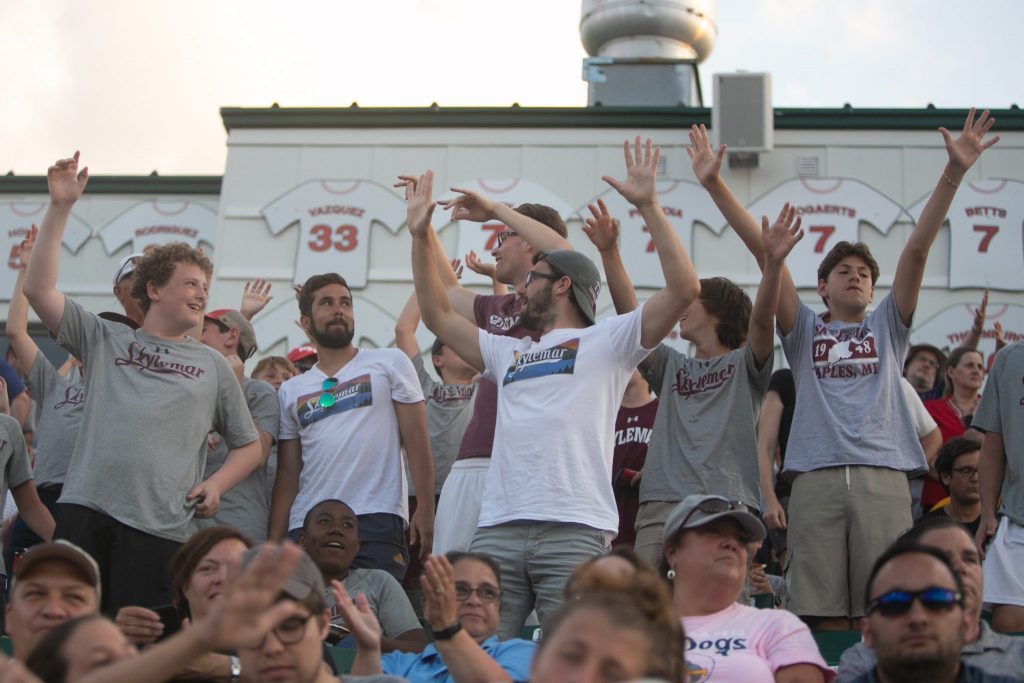 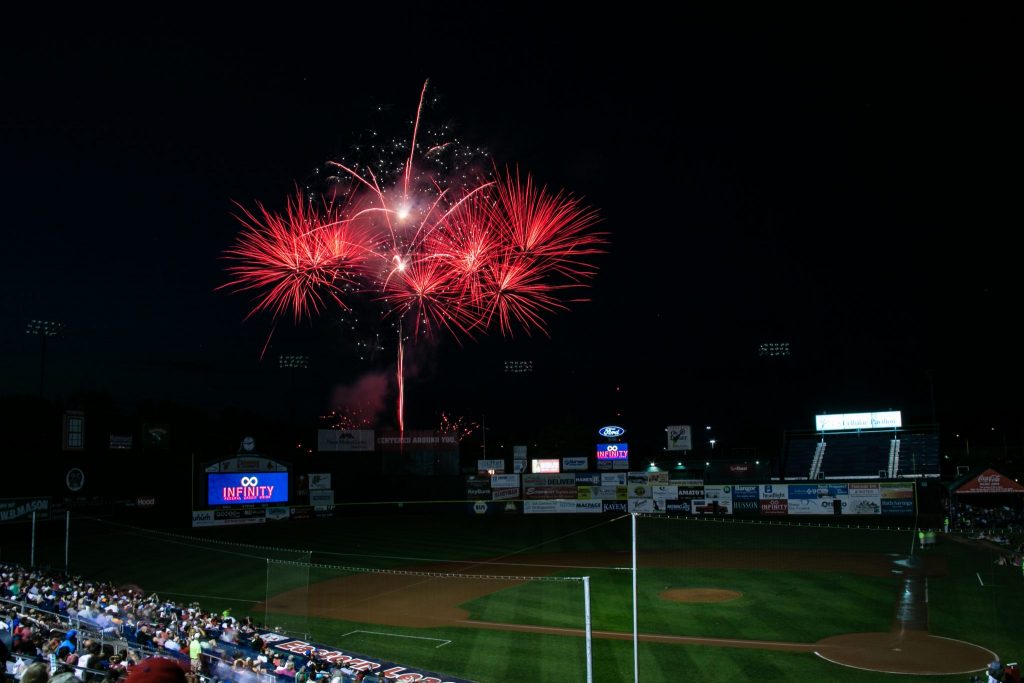 Rumble Ponies, look out! The Portland Seadogs have a whole lot of fans coming from Camp Skylemar tonight.

With each camper paired up with a specific staff member, they poured out of buses and swarmed into Hadlock Field.  It’s a terrific minor league ballpark and home to the Seadogs, a Double-A affiliate to the Boston Red Sox.

The stadium was packed, but with just about every single person from Skylemar there, we sort of “owned” the place.  Over the years we’ve gotten to know the ushers and management of Hadlock, and they’re always complimentary about our behavior.

Never heard of our opponent, the Rumble Ponies?  They’re from Binghamton, NY, and are affiliated with the Mets, but here’s their claim to fame:  former NFL quarterback and Heisman trophy winner Tim Tebow is on the team.

Several Sky guys were able to get autographs from Tim.  They even saw him get called out on a bang-bang play at the plate.  That was just about as cool as our six-year-old “almost camper” Nate Fink, who grabbed a foul ball.

Not only was watching the game really fun, but it was also exciting to spend “real, live money”.  Since we don’t use cash at camp, it’s a huge deal to the kids when they do.  Everyone spends the same $30 on whatever they want, which goes really far at a family-park like this.  The Sea Biscuits (vanilla ice cream between two chocolate chip cookies) were especially popular.

Just before the Independence Day fireworks, the stadium spotlight turned to our very own Jared H (Bunk 24), who was selected out of the sold-out crowd to play a “Let’s Make A Deal” kind of game.  Inside the first bucket he picked was a gift card for gasoline.  He turned that down, since he doesn’t have his driver’s license yet.  The next offer was for double the amount of gas (which he couldn’t use for three years…) and tickets to a Seadogs game at the end of August (way after camp…).  He turned that down.  Then the announcer “sweetened the pot” by throwing in a certificate for go-carting (another gift he can’t use…)  Jared turned that down too and went for the final bucket.  He won a plastic lobster!  To the rest of the crowd it’s the “booby prize”.  To Jared and his Skylemar brothers it’s the best one ever!