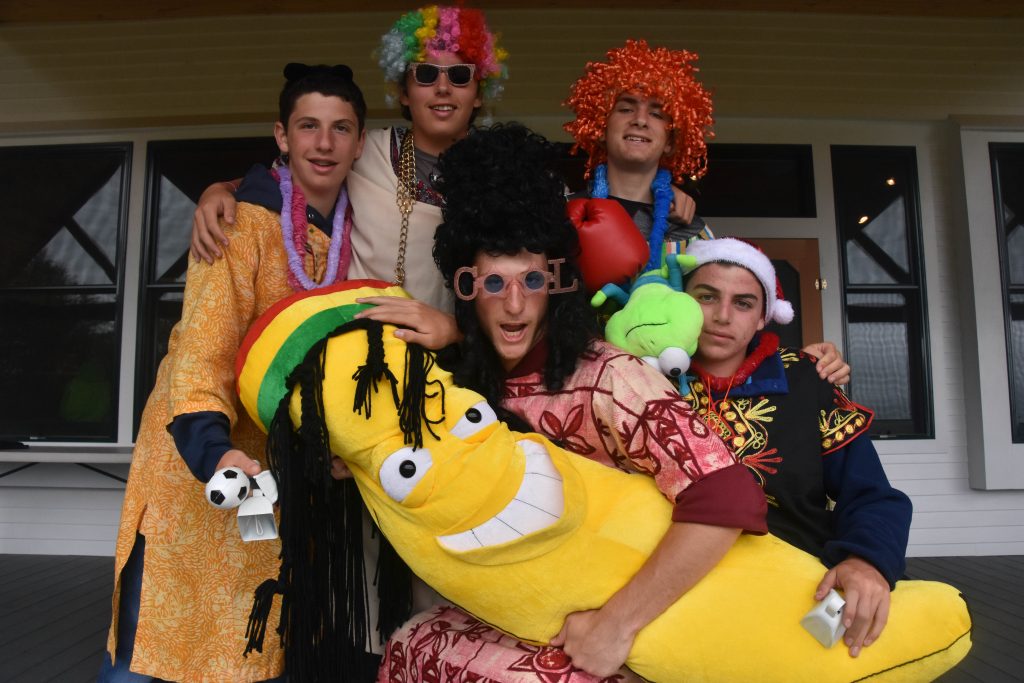 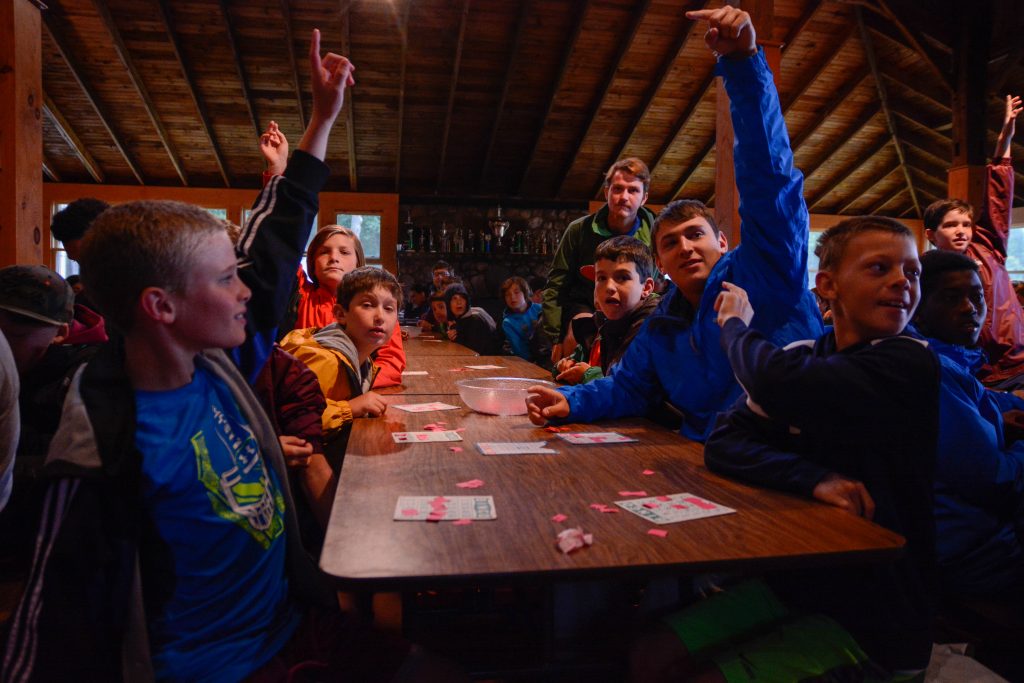 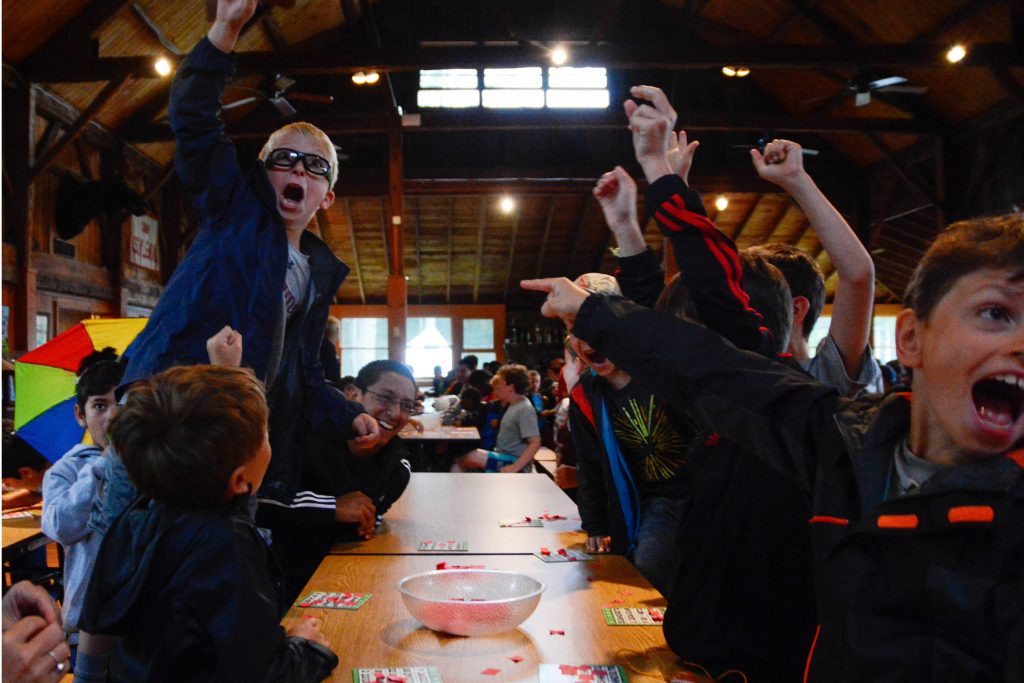 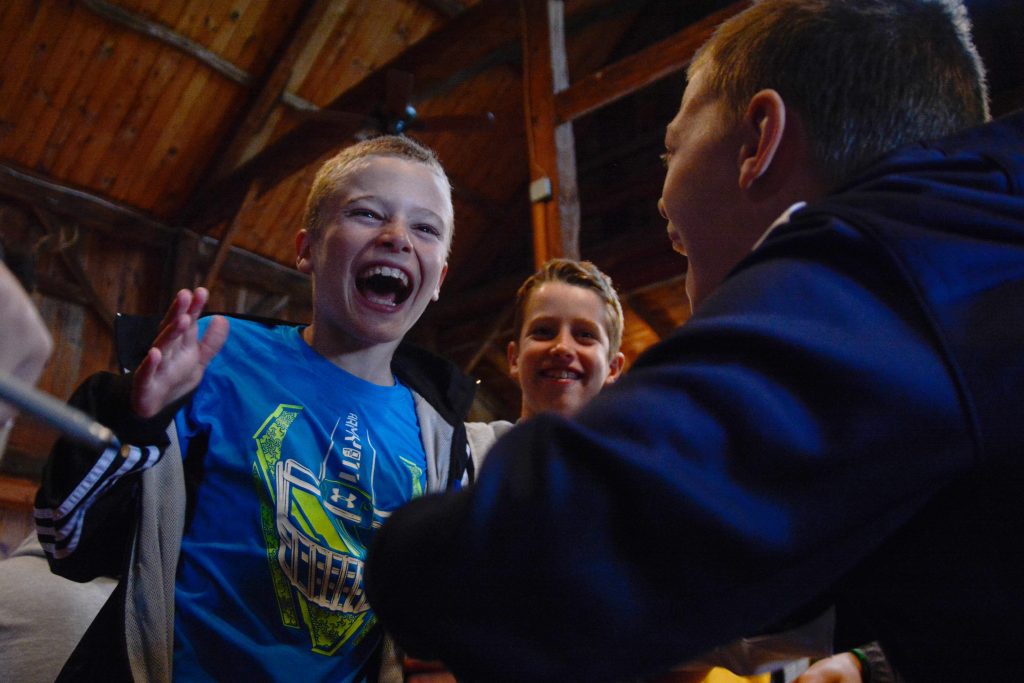 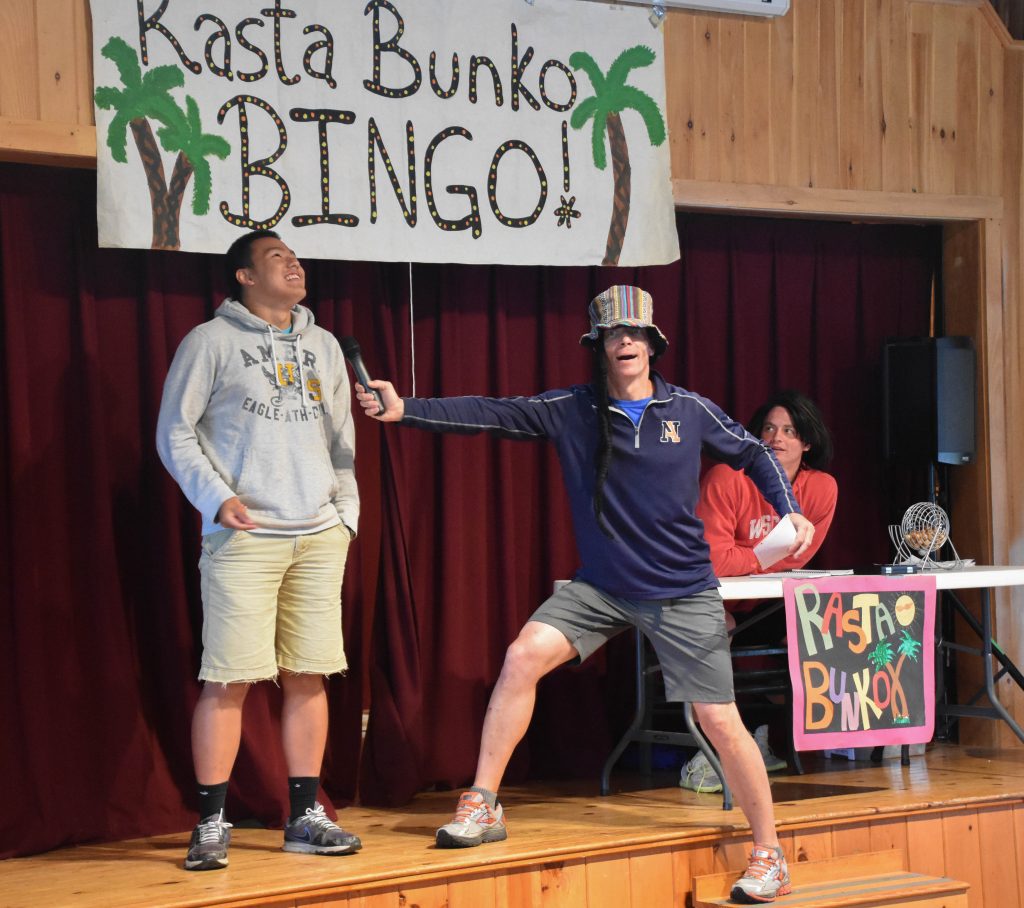 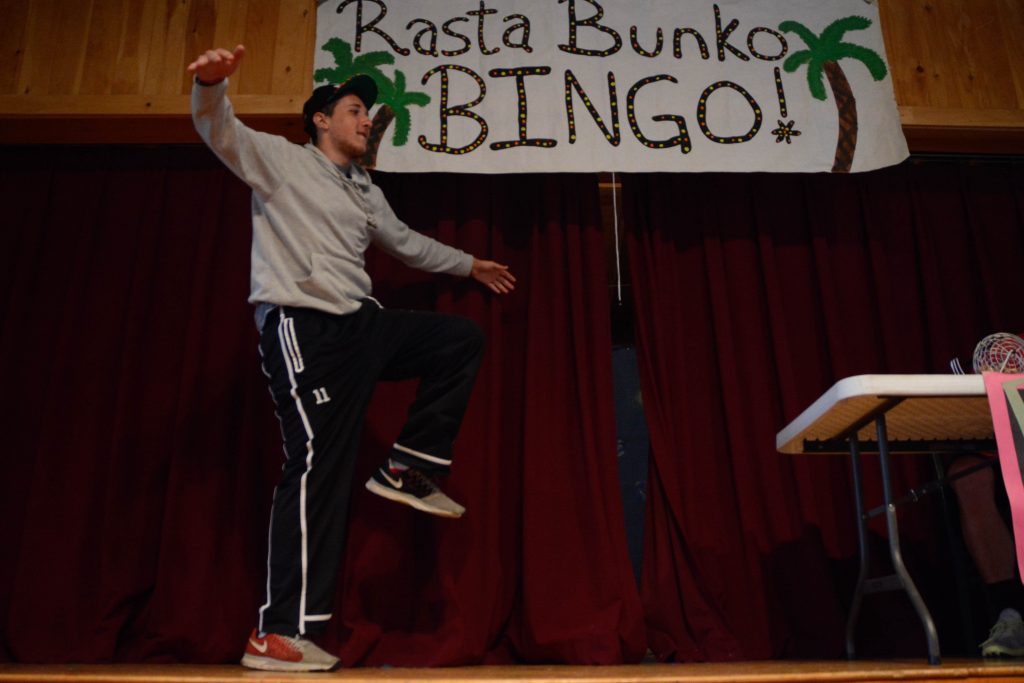 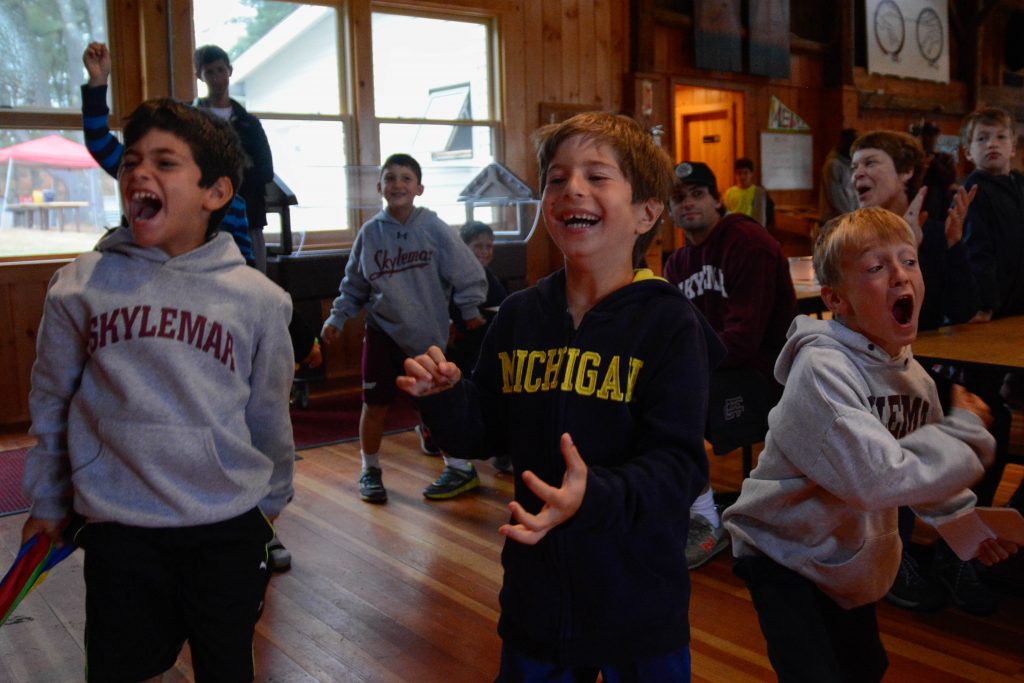 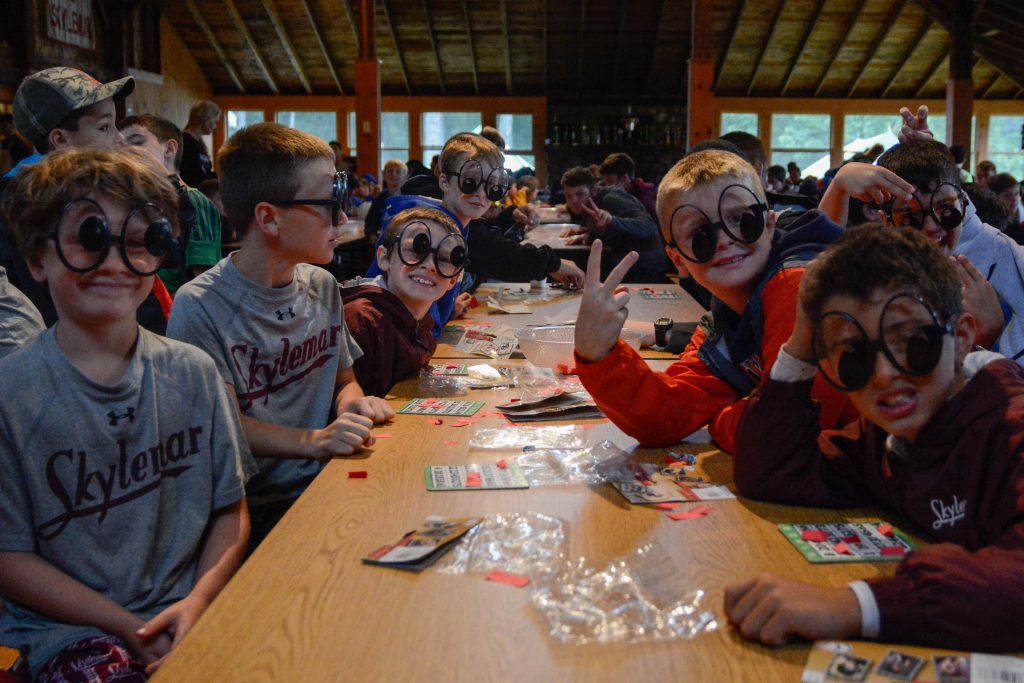 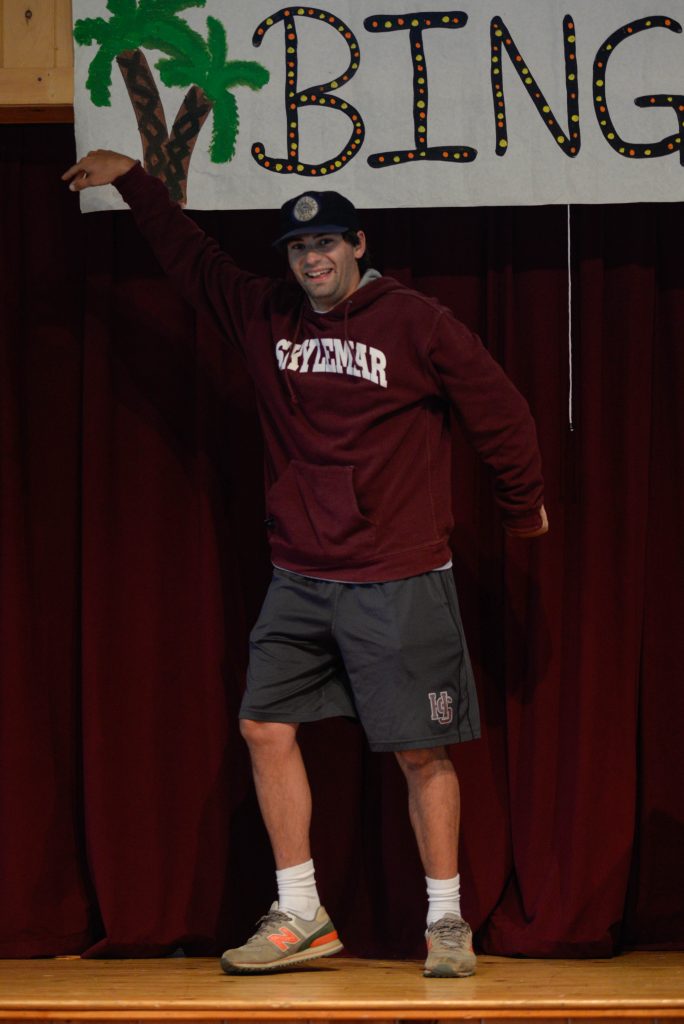 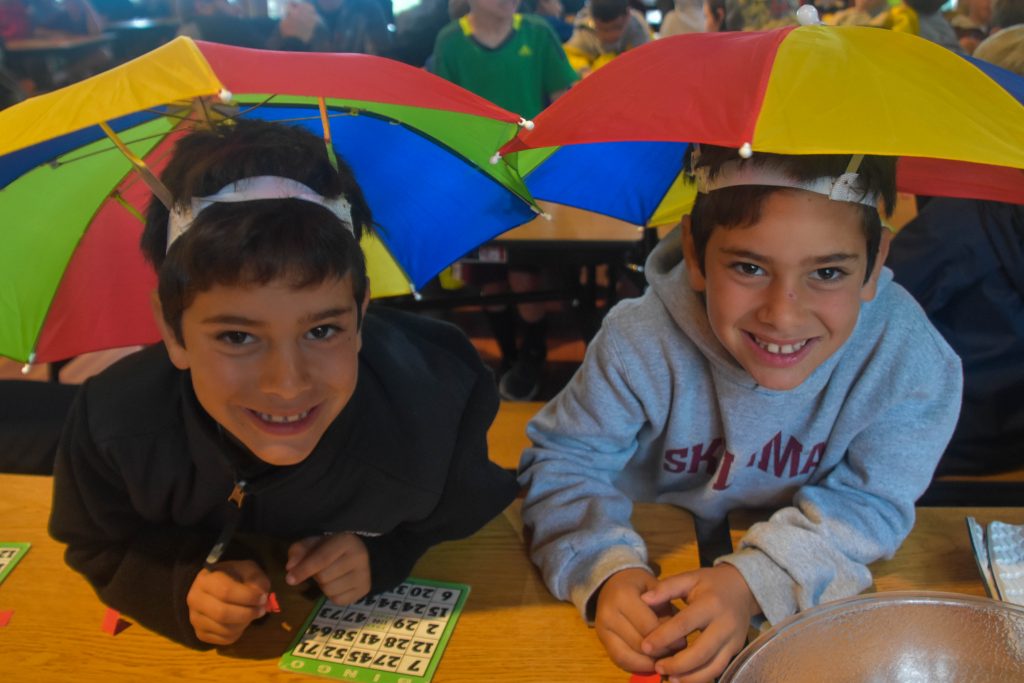 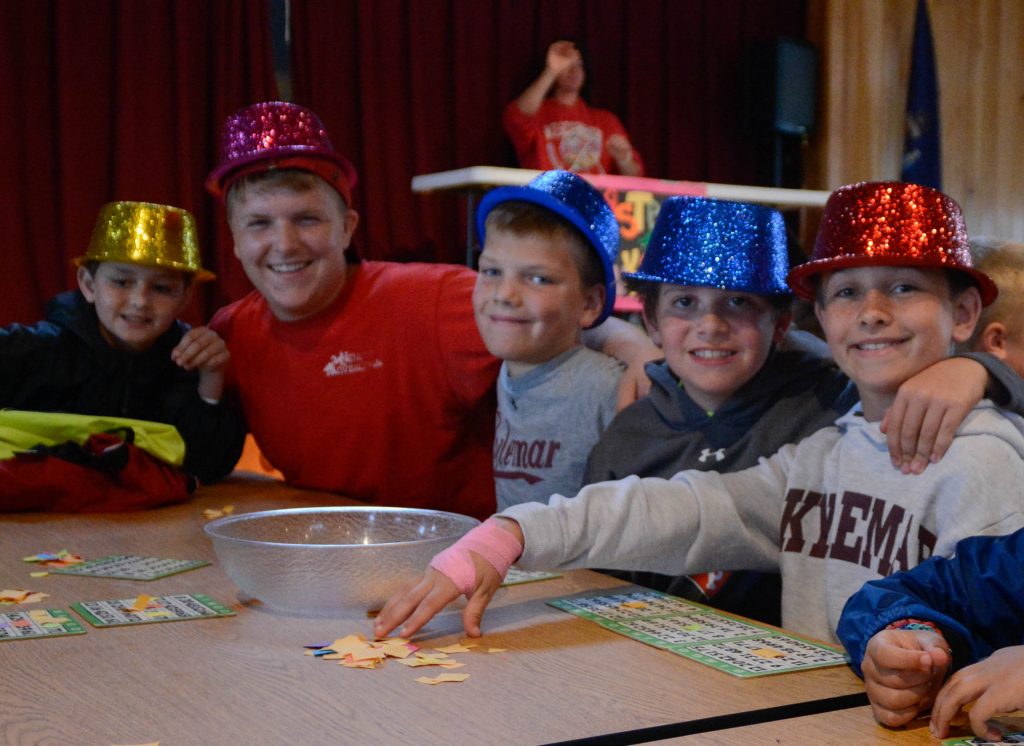 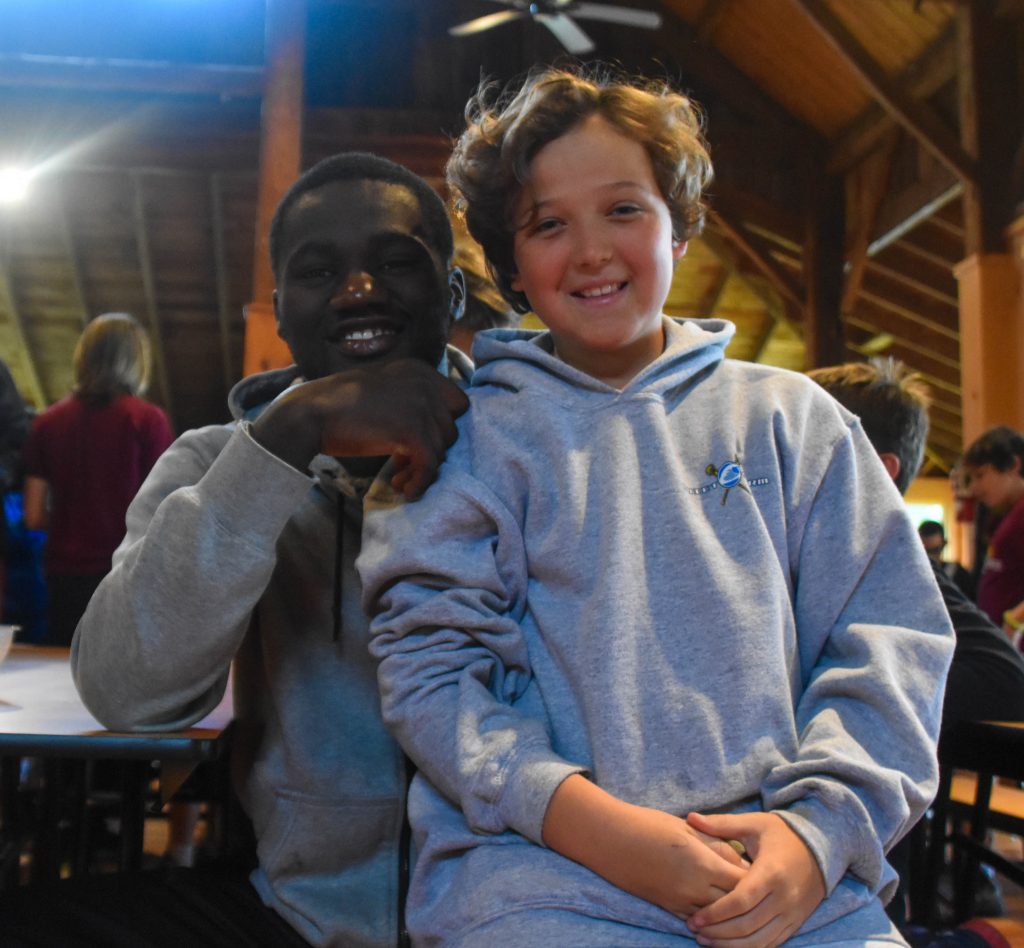 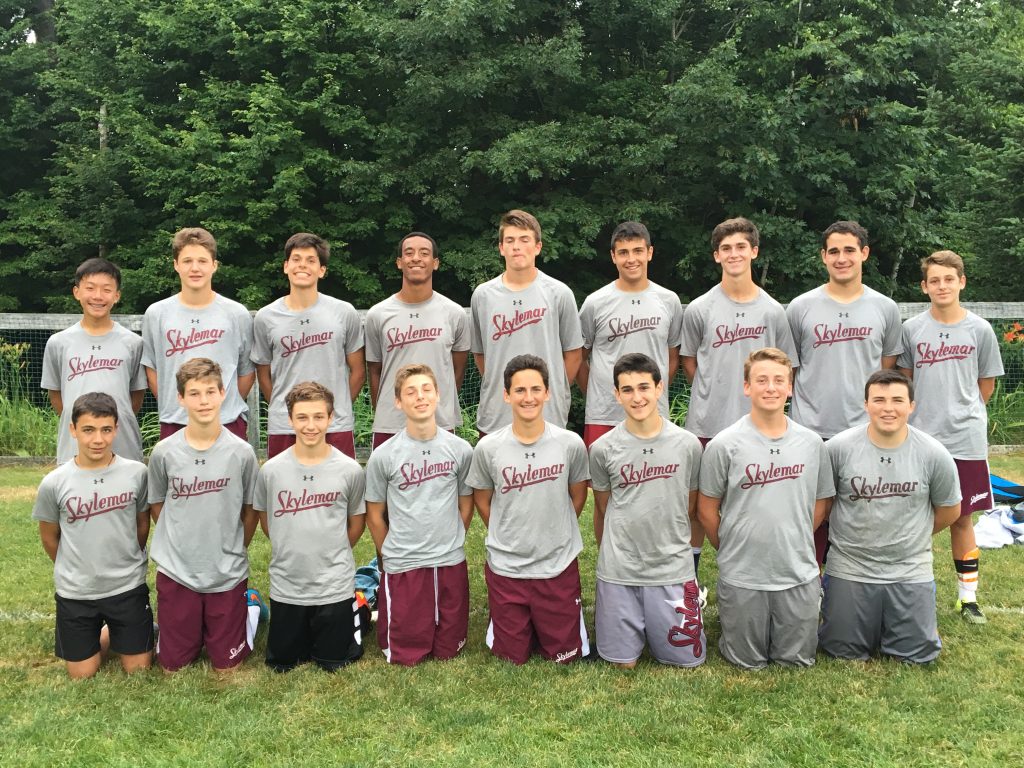 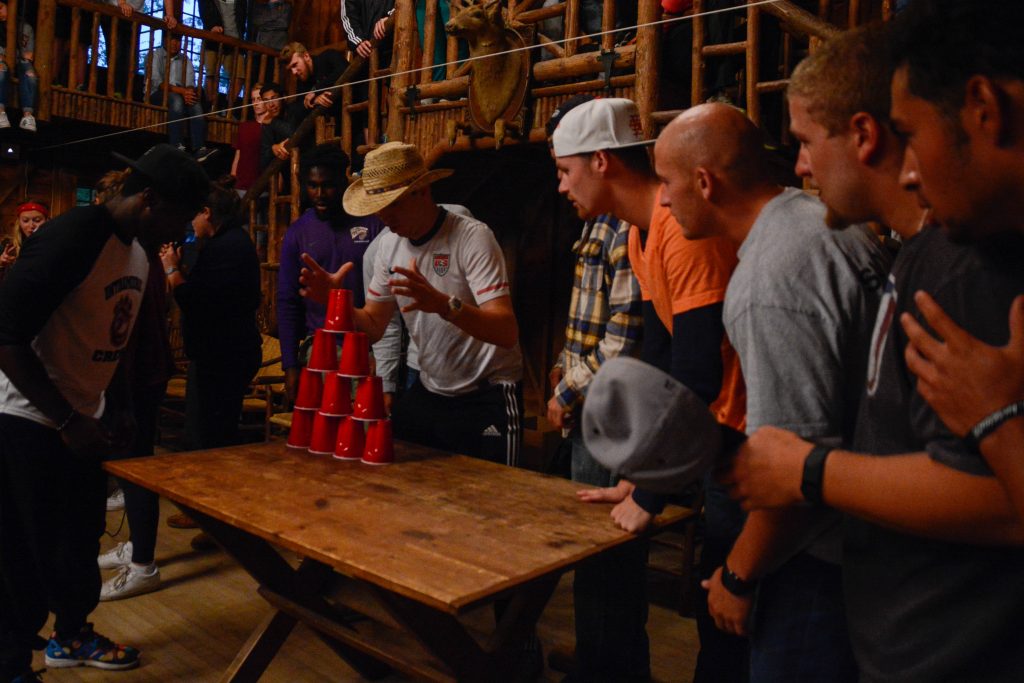 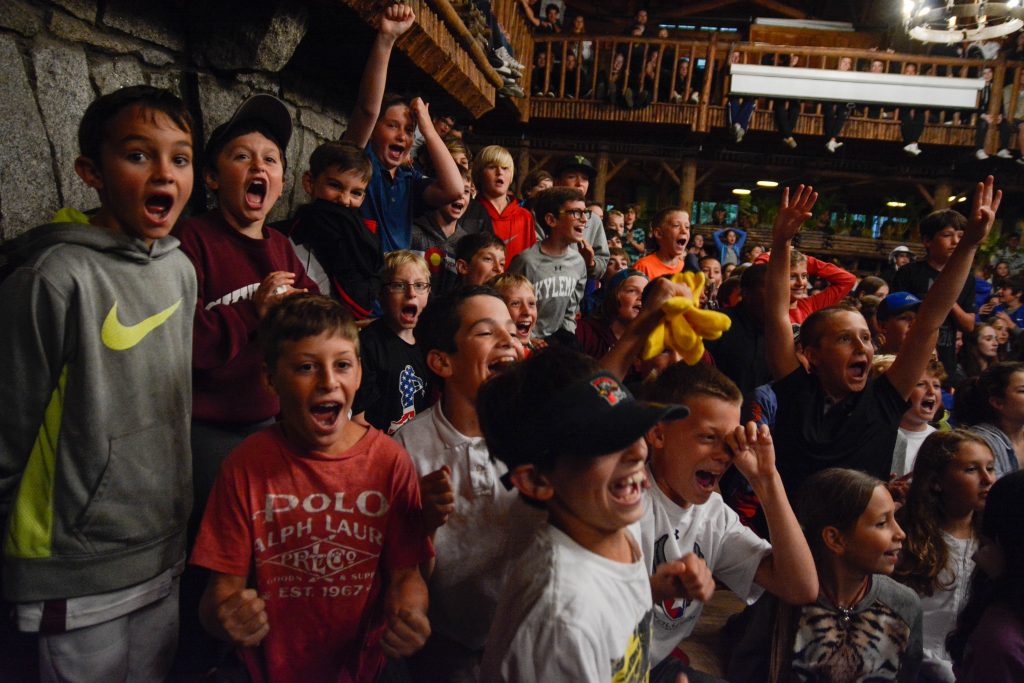 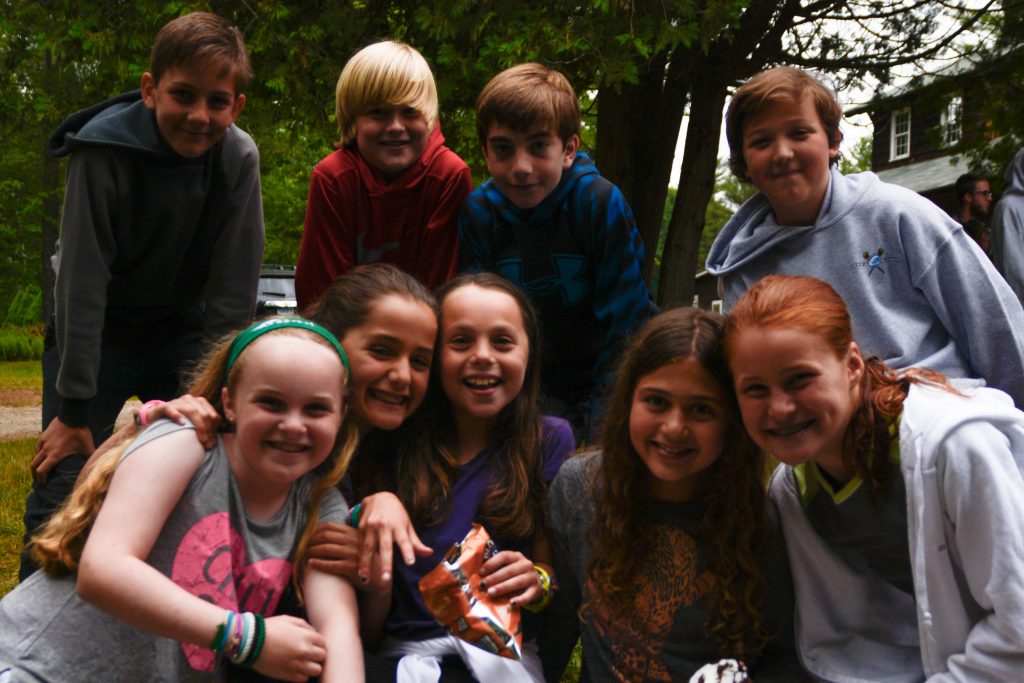 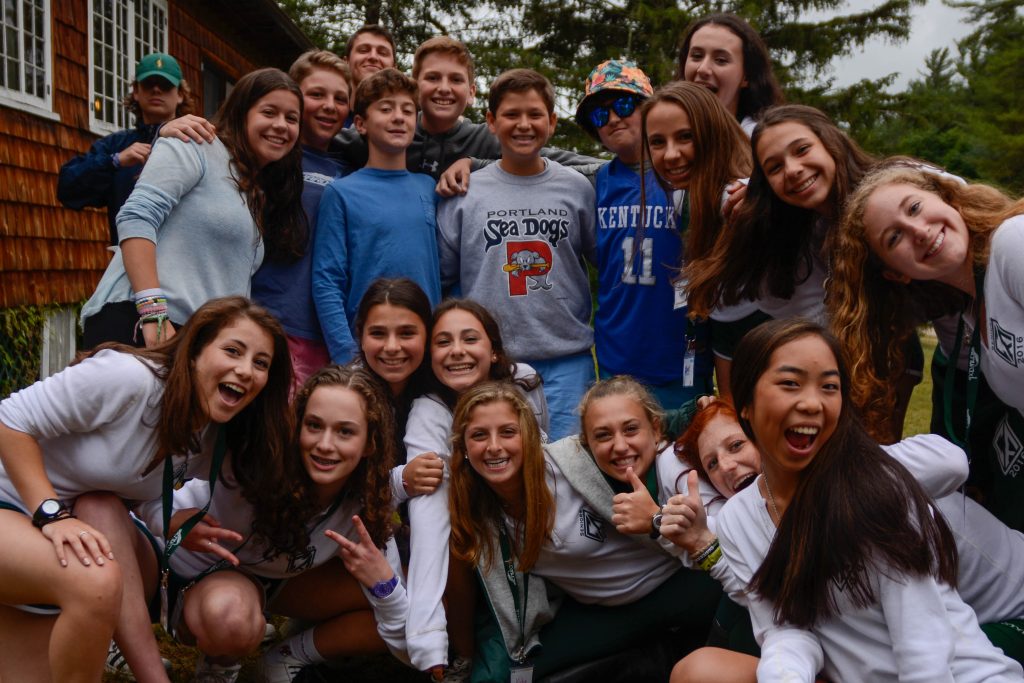 Kinda rainy, kinda not. When too wet to play, we came inside for RASTA BUNKO!

Up and down or straight across and someone yells, “Rasta Bunko!”. The card is confirmed, and out from behind the curtain run 12 rasta-JCs in crazy costumes, ringing bells and blowing horns. Now that’s a celebration!

The winner is escorted to the stage to select a stunt card, as well as a counselor to perform the challenge. After the counselor successfully completes the stunt, the whole cabin wins a prize.

For example, counselor Drew M had to demonstrate his best ninja moves. Travis had to dance to a Michael Jackson song. Lucas had to sing “Taps” and provide a visual interpretation. Jerry named six states that began with the letter “M”, and Joe did 30 pushups in 30 seconds. Impressive and hilarious!

Meanwhile…U15 soccer tournament carried on rain or shine. We lost the first game in a nail-biter, 2-1. The second game showed our heart, as we battled back from a 3-1 second half deficit (with three goals in five minutes) to win 4-3. Third game was a 3-1 win in a very back and forth game. After three tiring, close games, we ultimately lost in the finals, a bit disappointed, but represented well!

A few points to note, in addition to the fun we had: We held our cool despite some disappointing behavior on the part of another team. Even the coaches of the host camp remarked about this, and complimented us as the camp with passion and the most committed athletes on the field. Also, it was cool that Juan and Pablo took advantage of the opportunity to practice what they learned in the “Free Kick Clinic”. They scored three goals off of free kicks.

The team played so long and hard that they were late arrivals to our annual dinner party with Camp Fernwood. Five busloads of Skylemar traveled to Poland, Maine, where for a couple hours we became one big coed camp. Counselors entertained with cup flipping and stacking contests and a life jacket relay. We were especially proud of our staff members who played guitar and sang. To perform with no practice in a packed room of 500 takes strength and confidence. Thank you to Fernwood for a wonderful night, and for welcoming us despite the wet weather.

As much as we enjoyed hanging with girls, it was good to be back in the ‘hood. The brotherhood, that is.