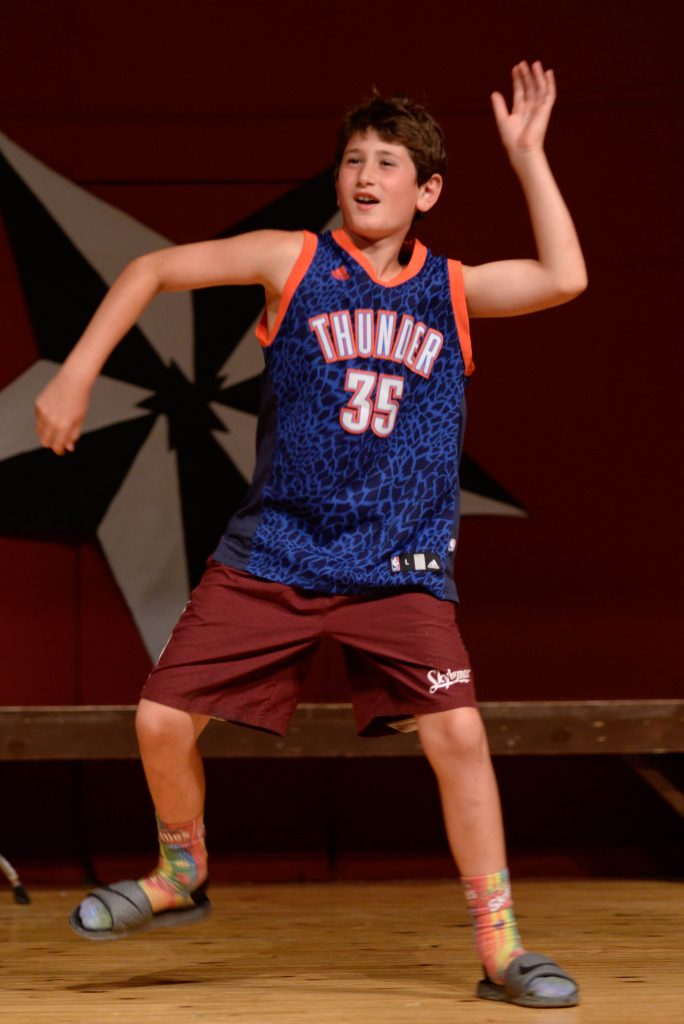 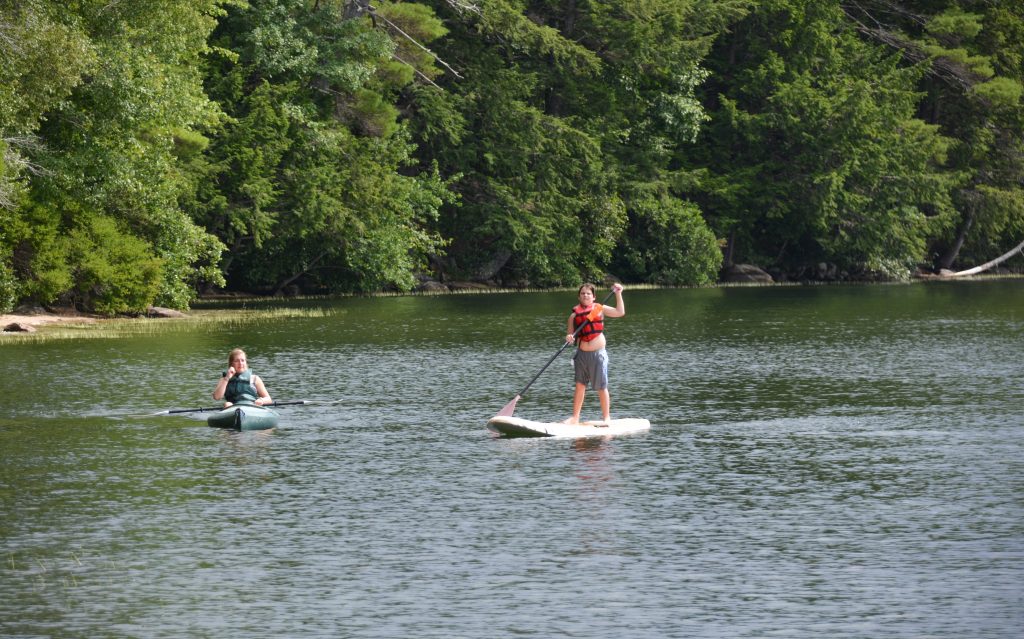 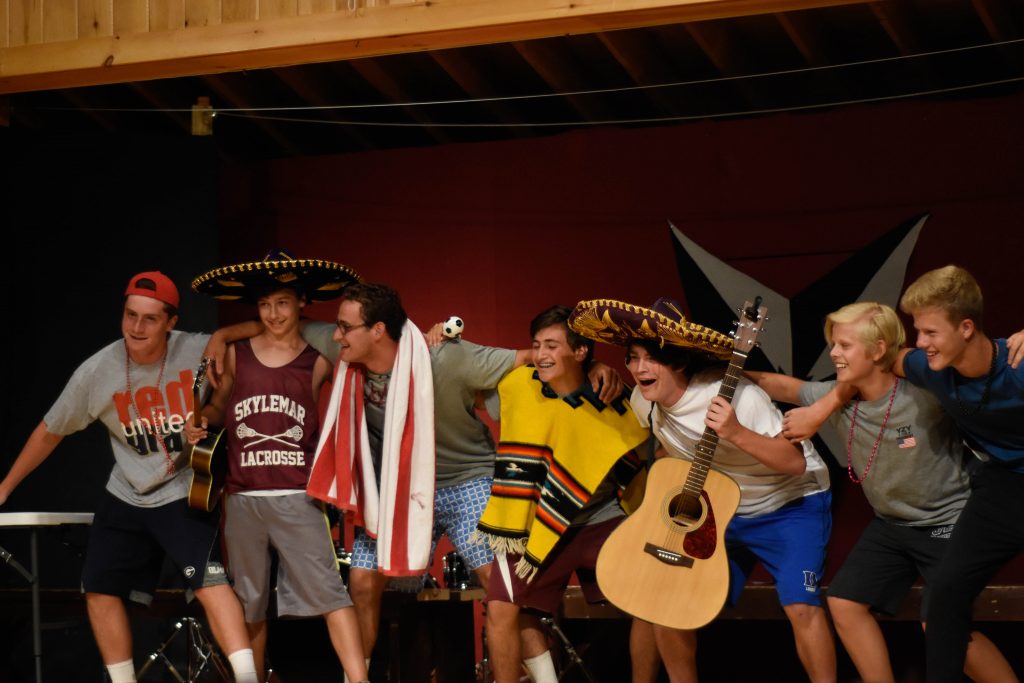 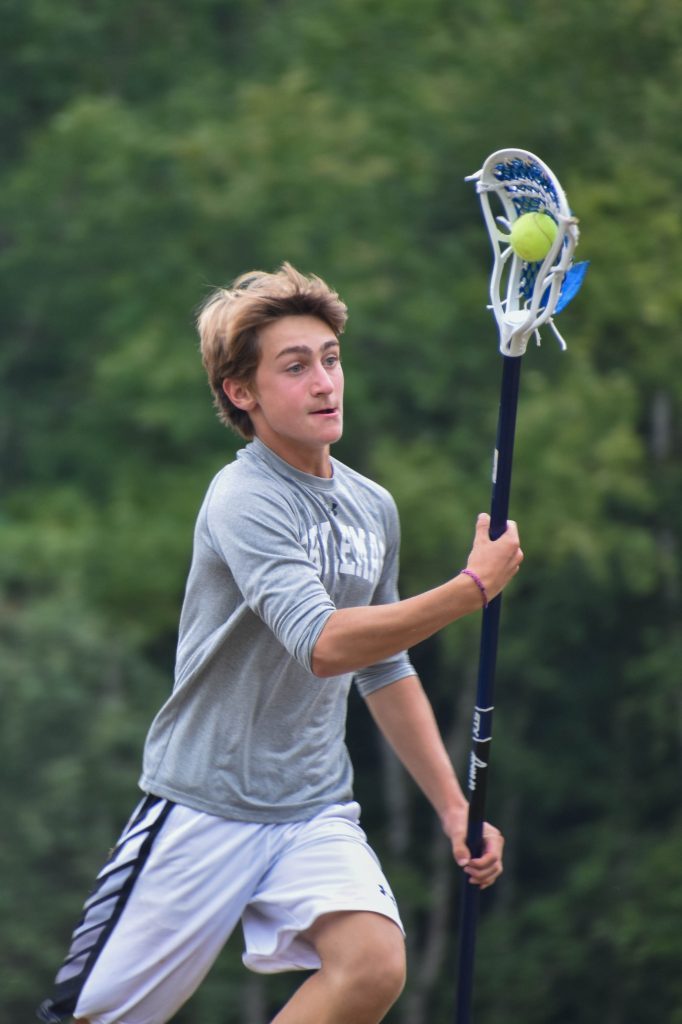 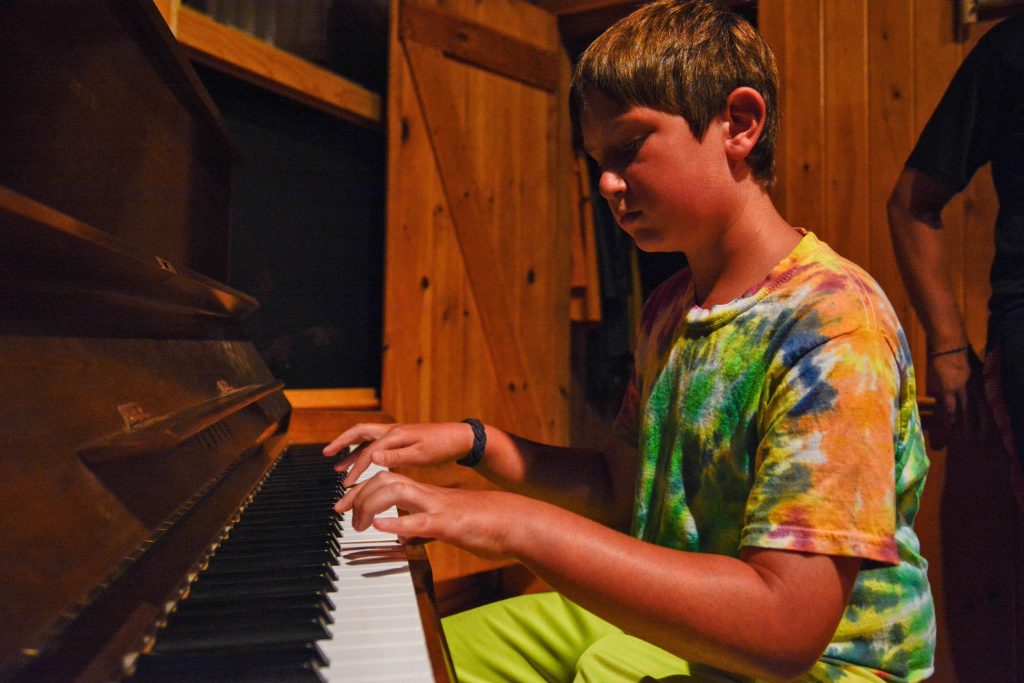 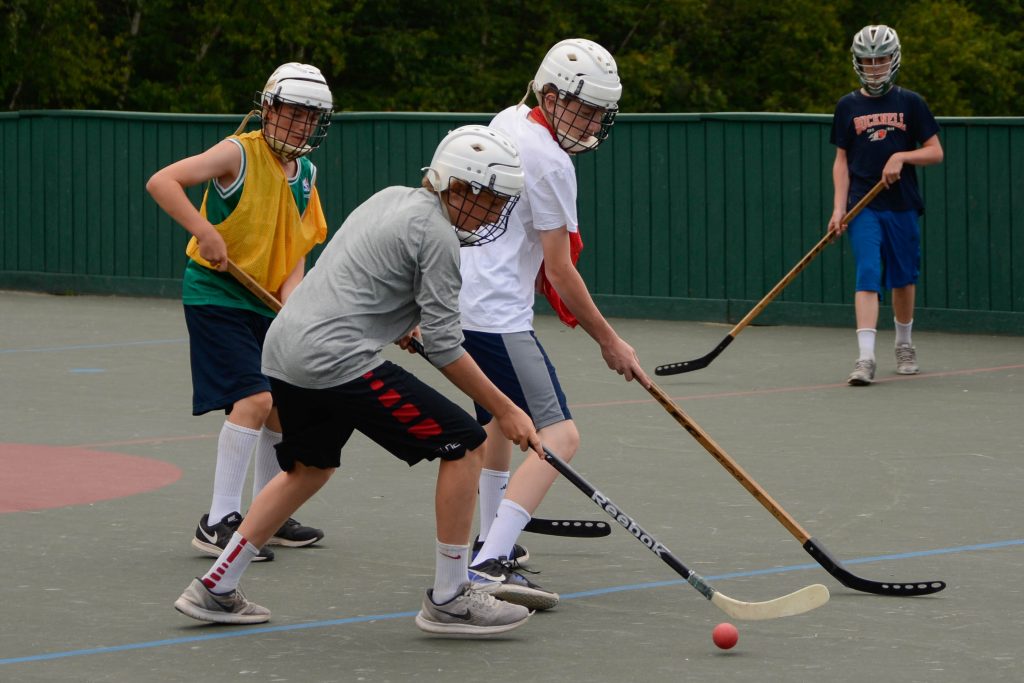 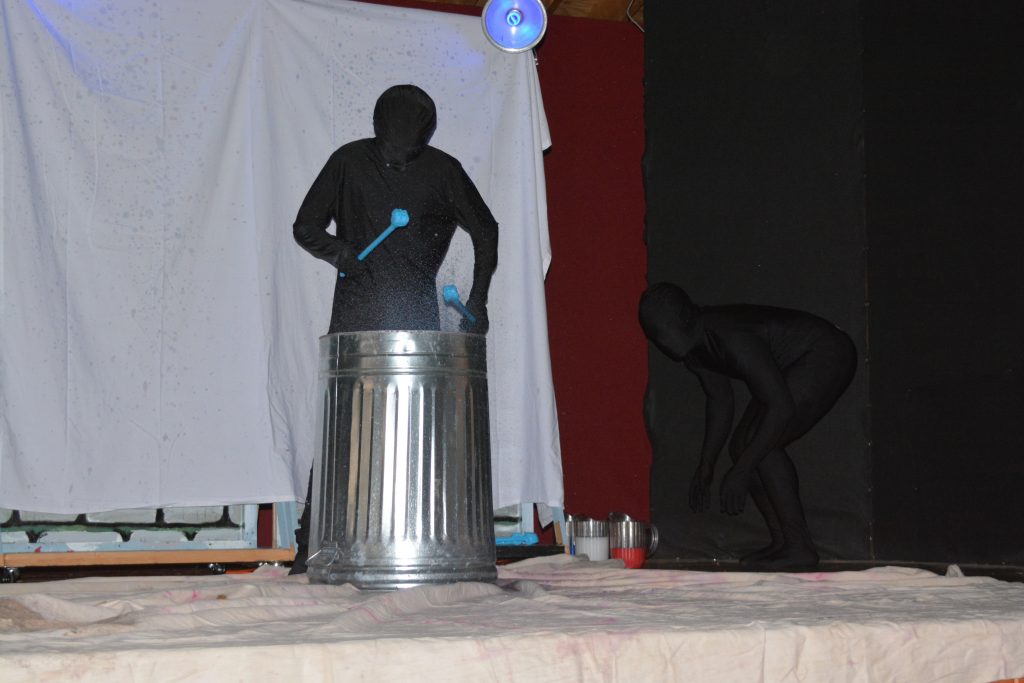 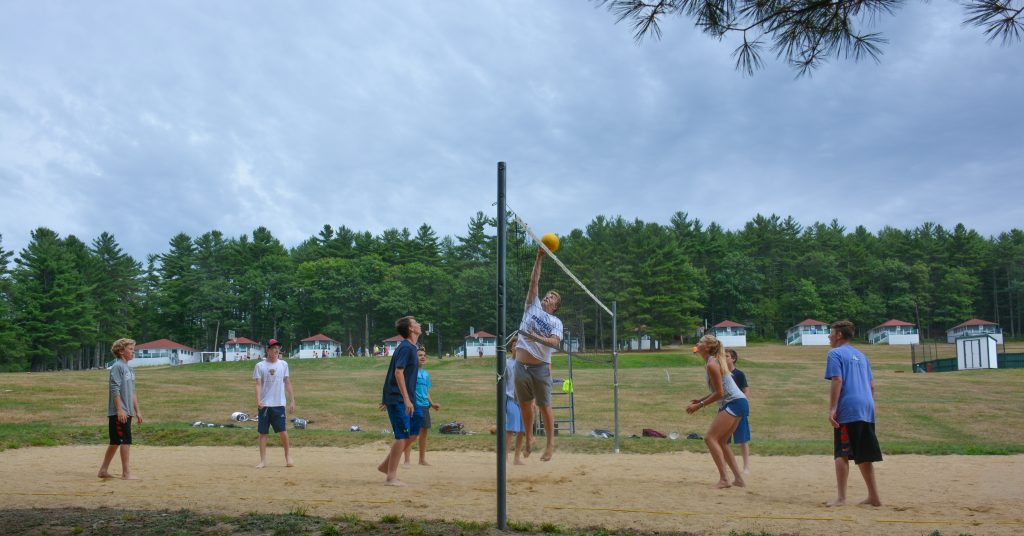 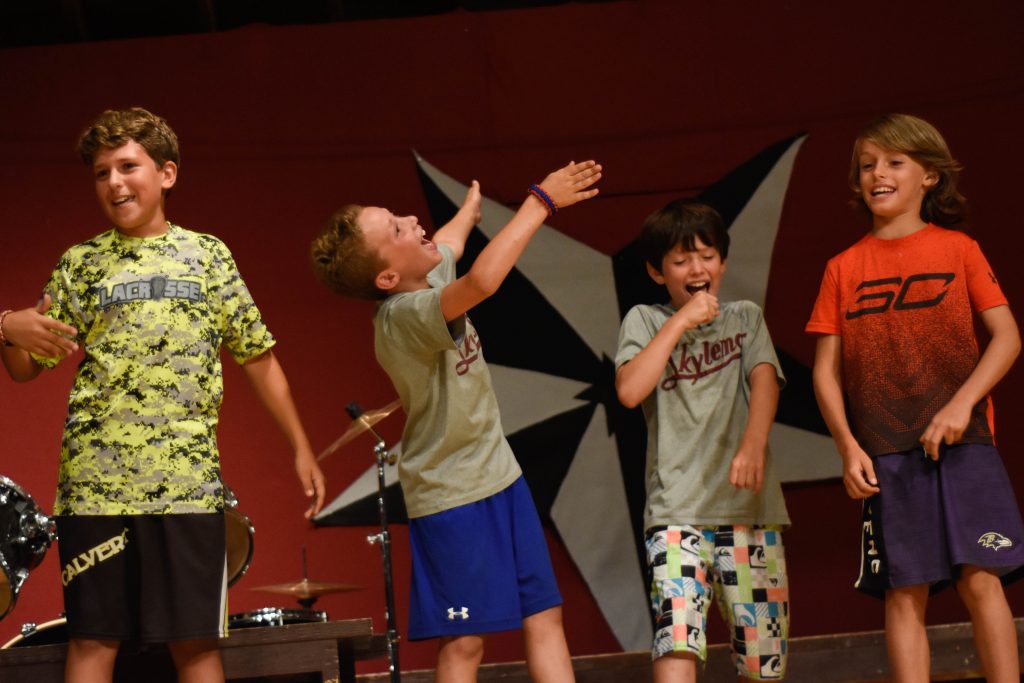 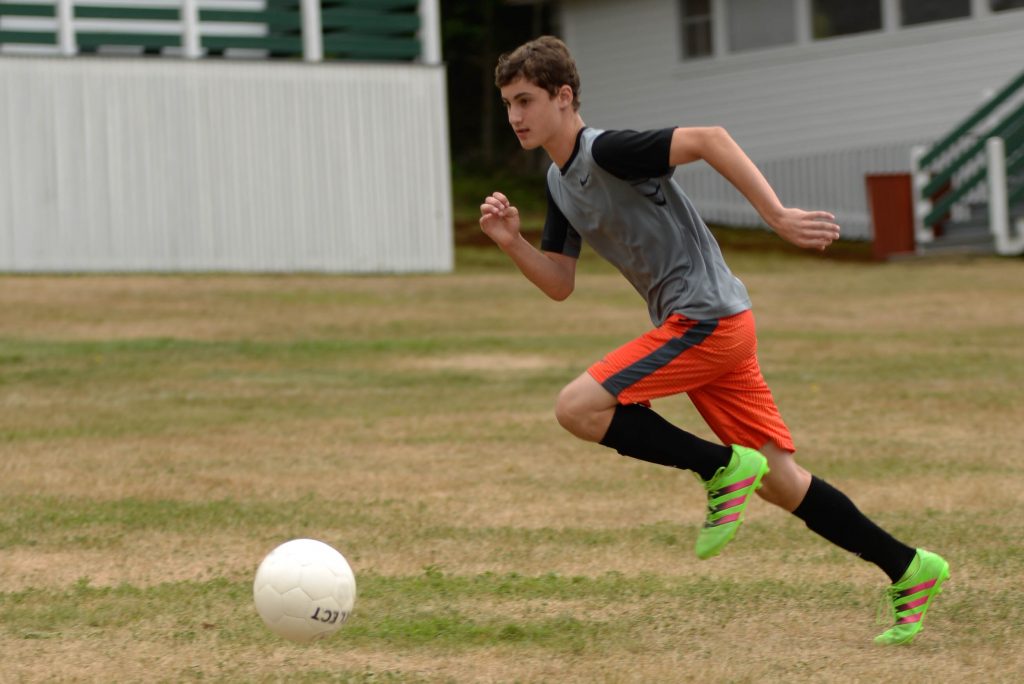 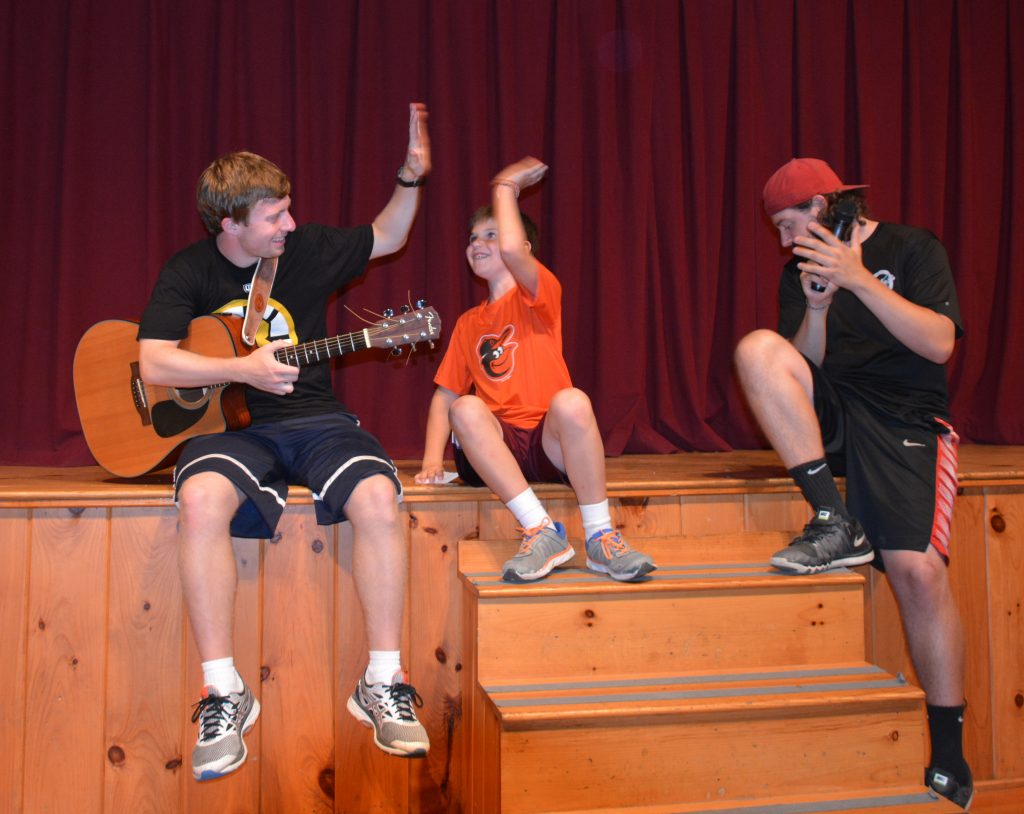 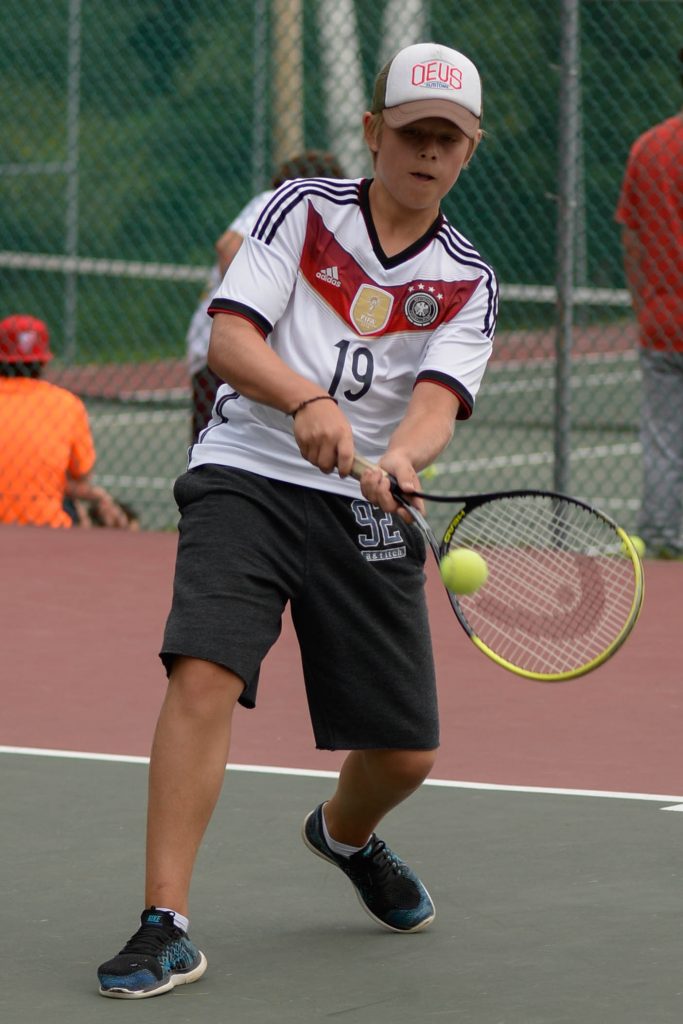 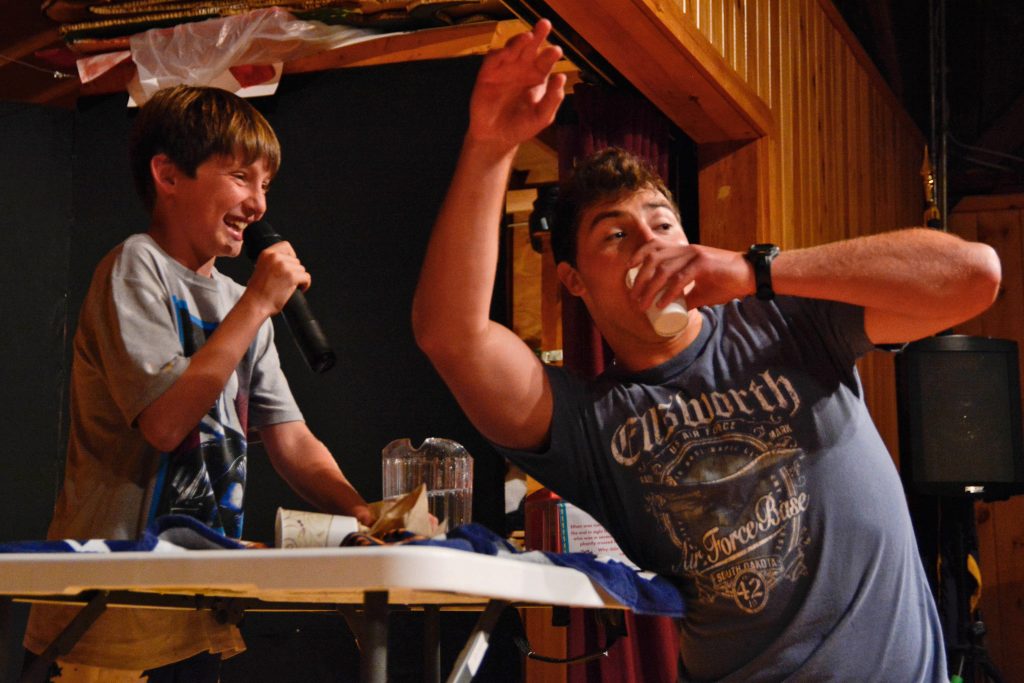 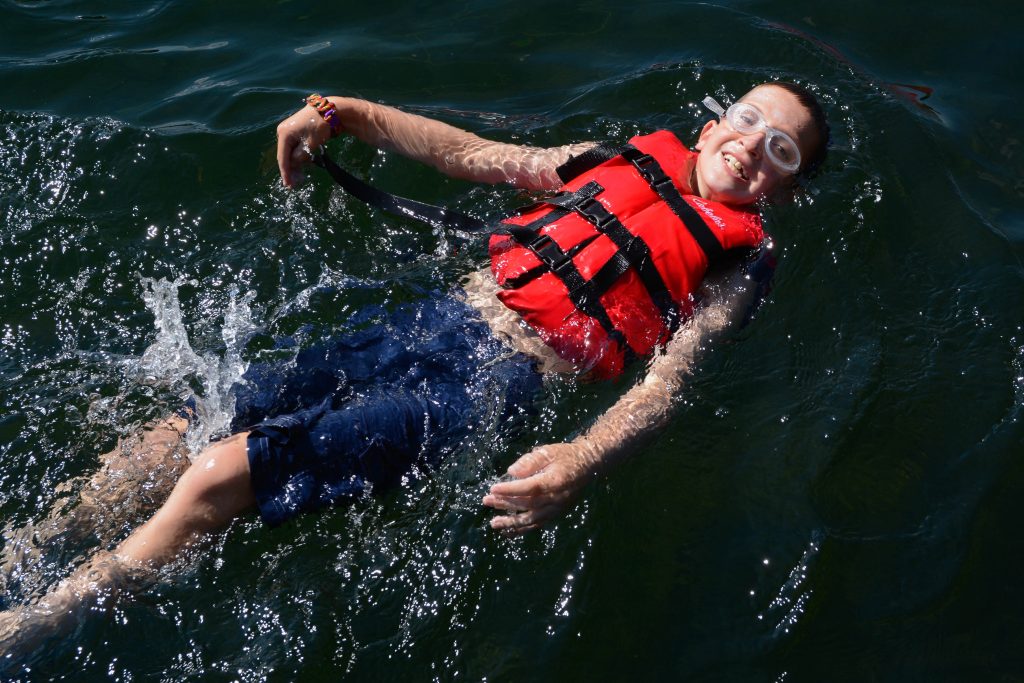 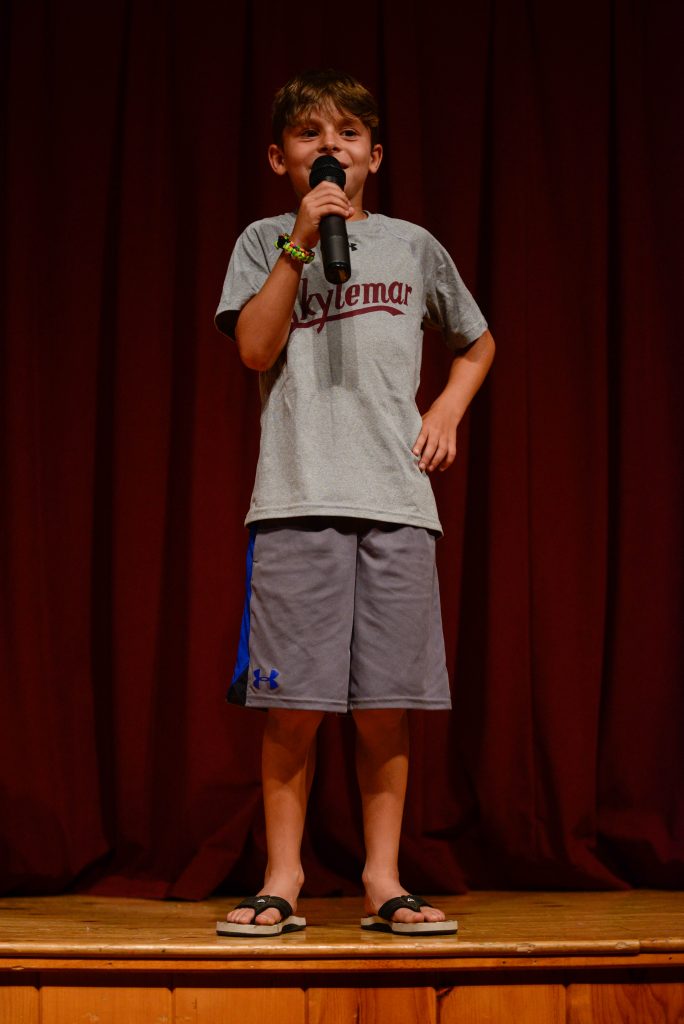 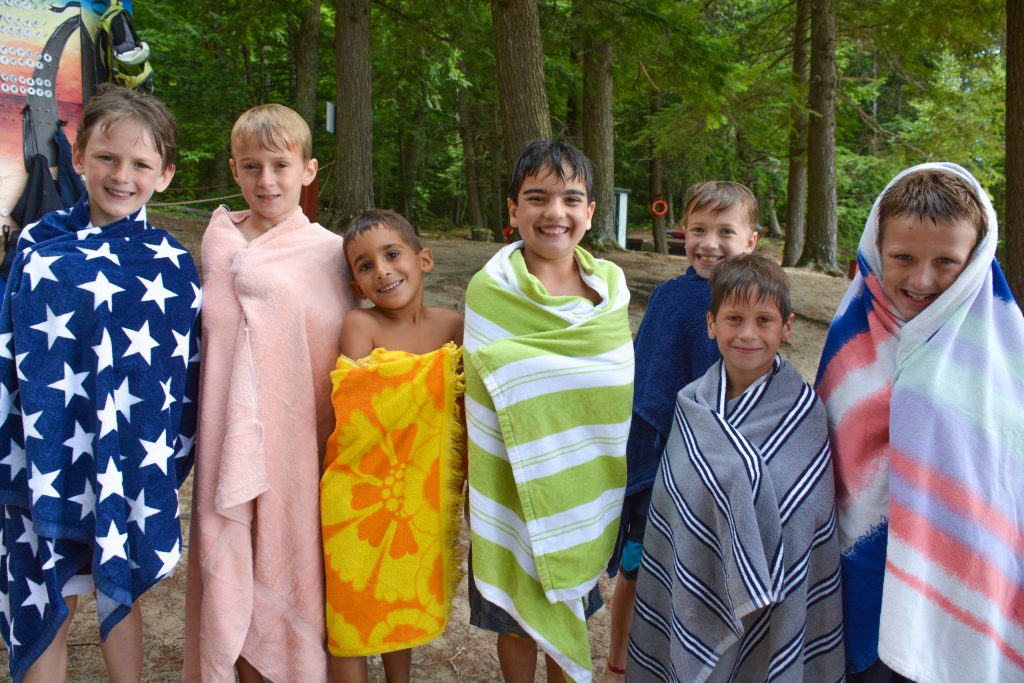 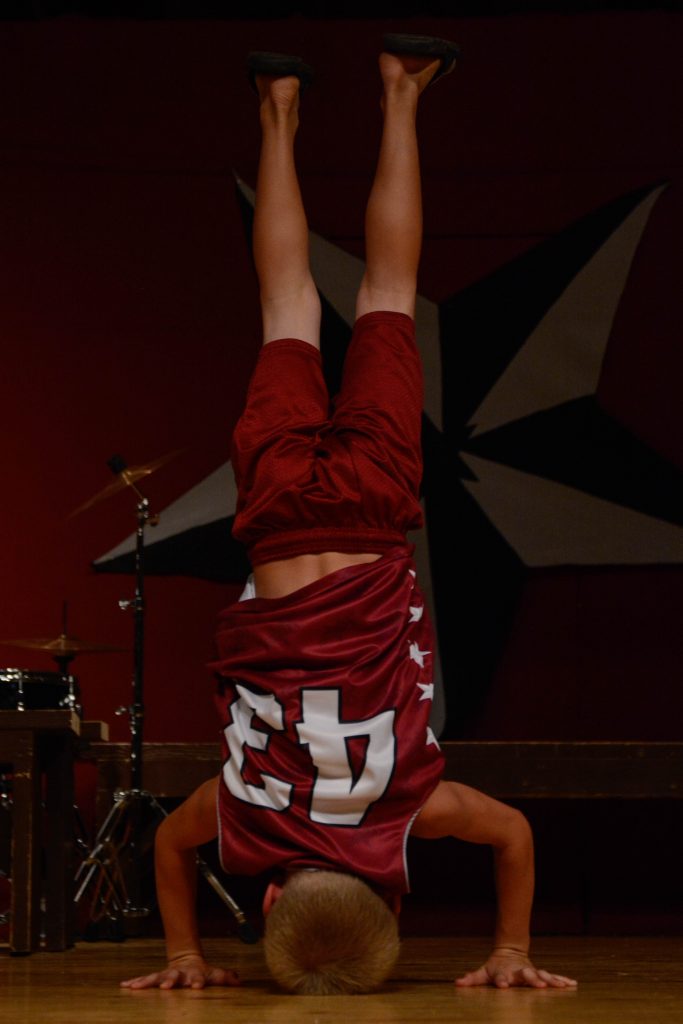 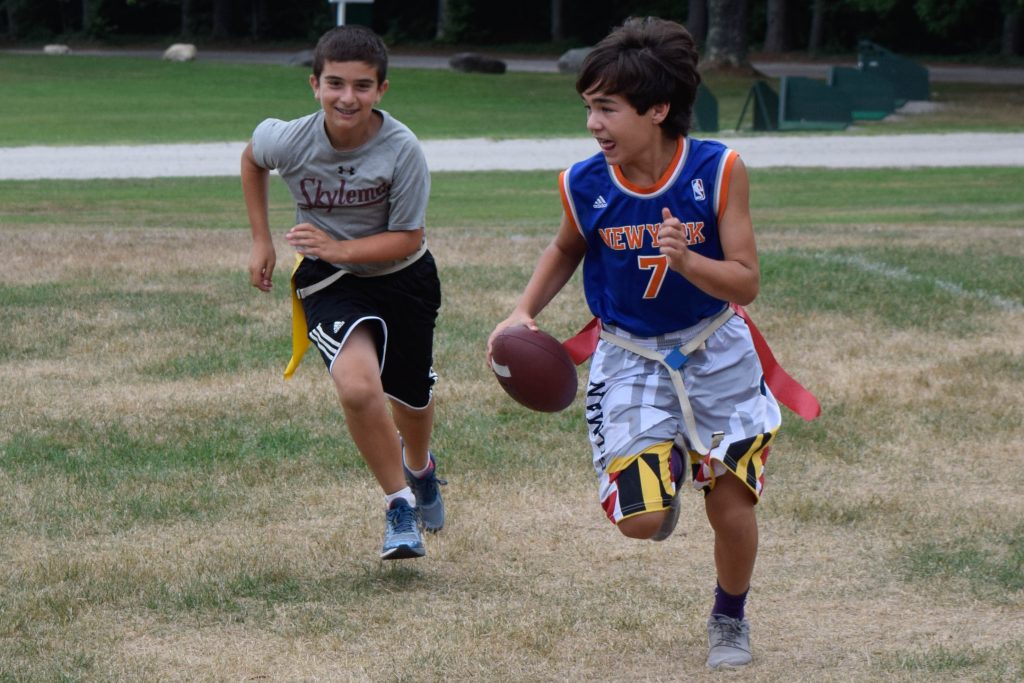 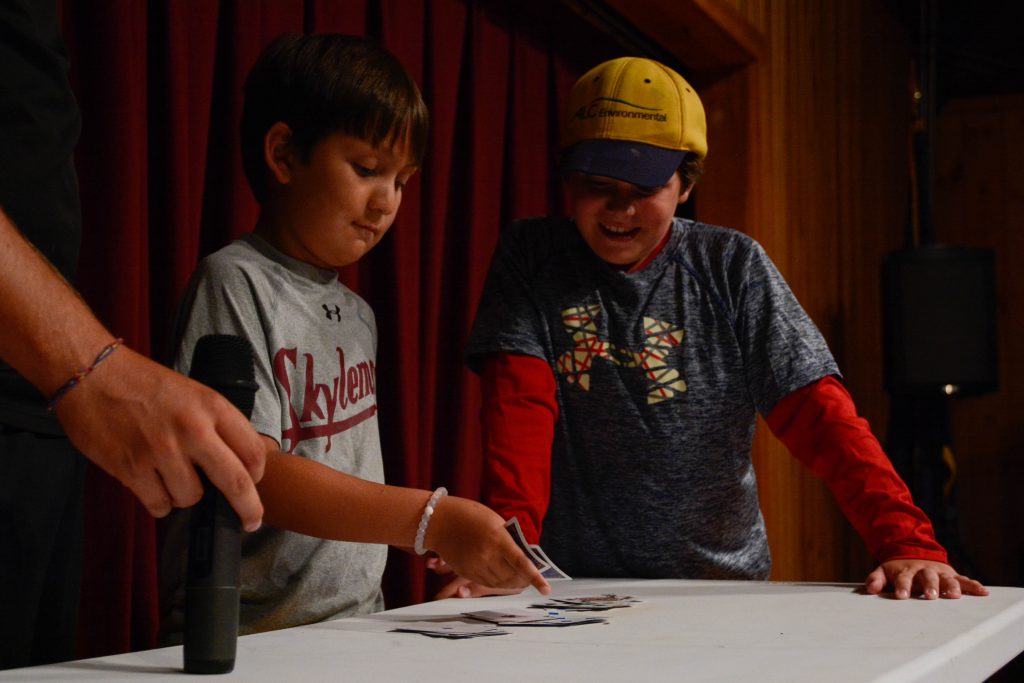 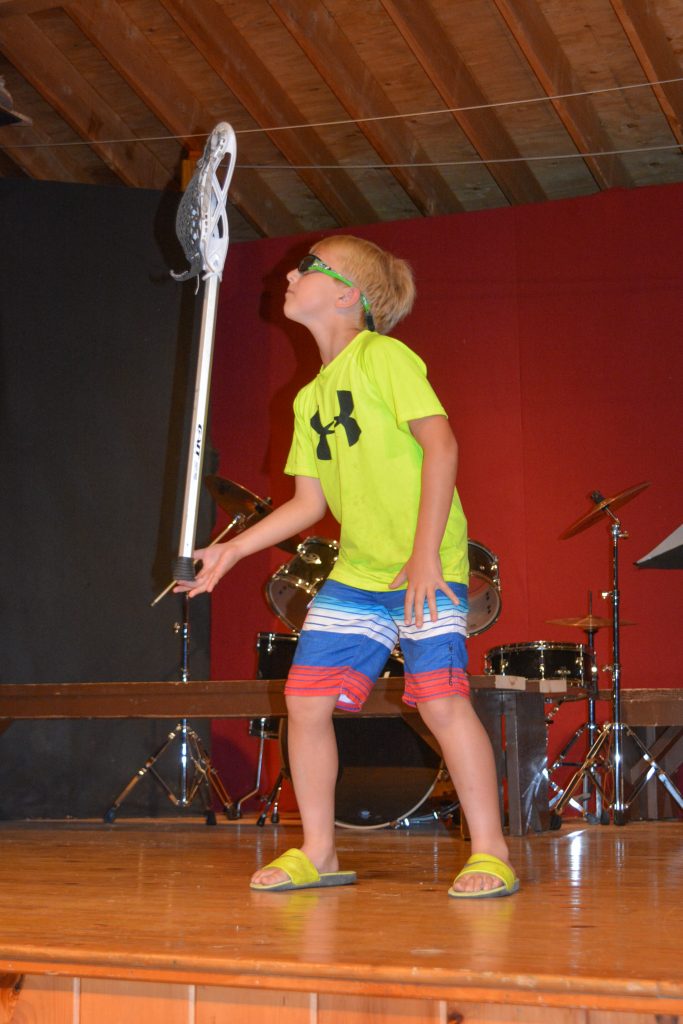 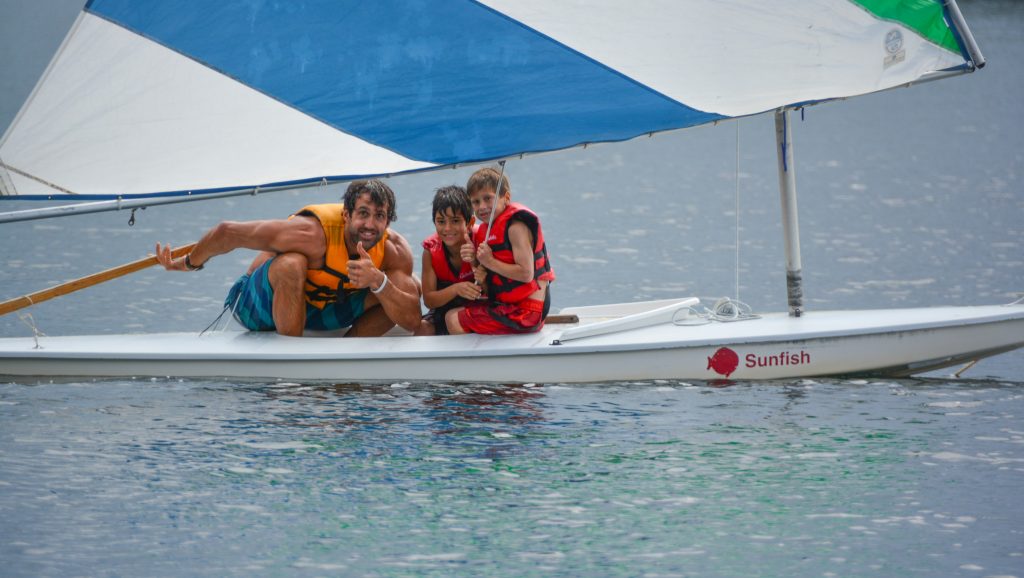 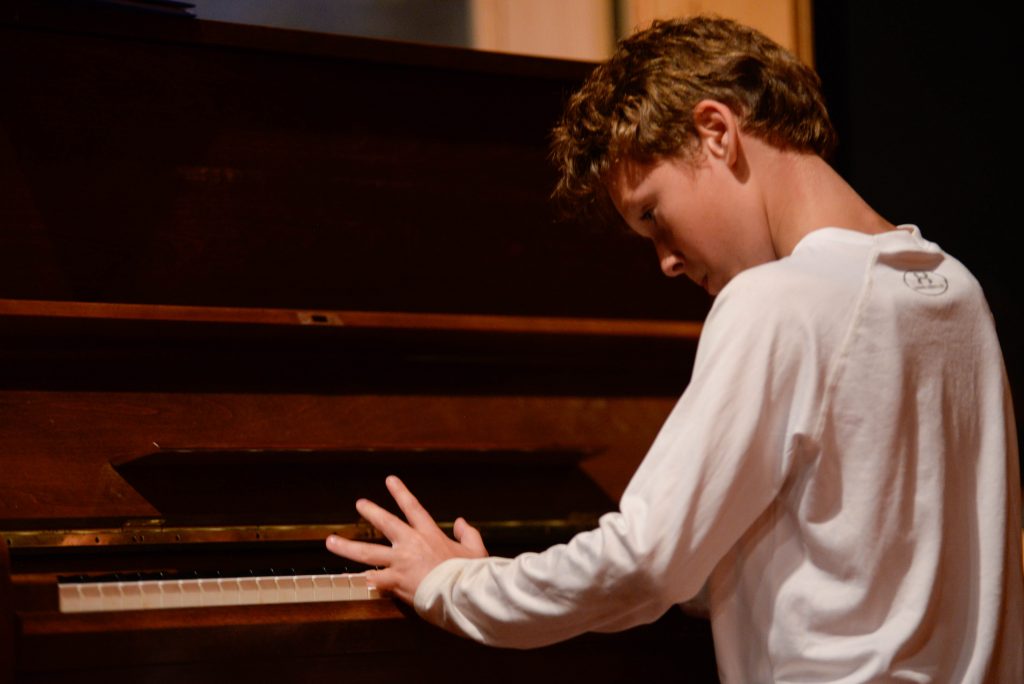 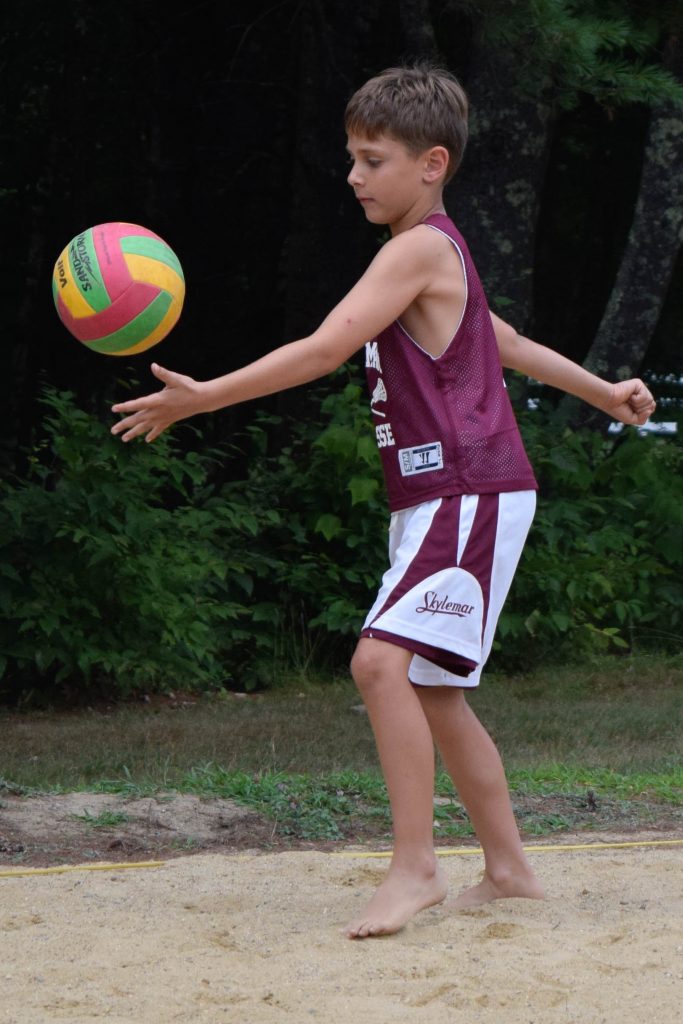 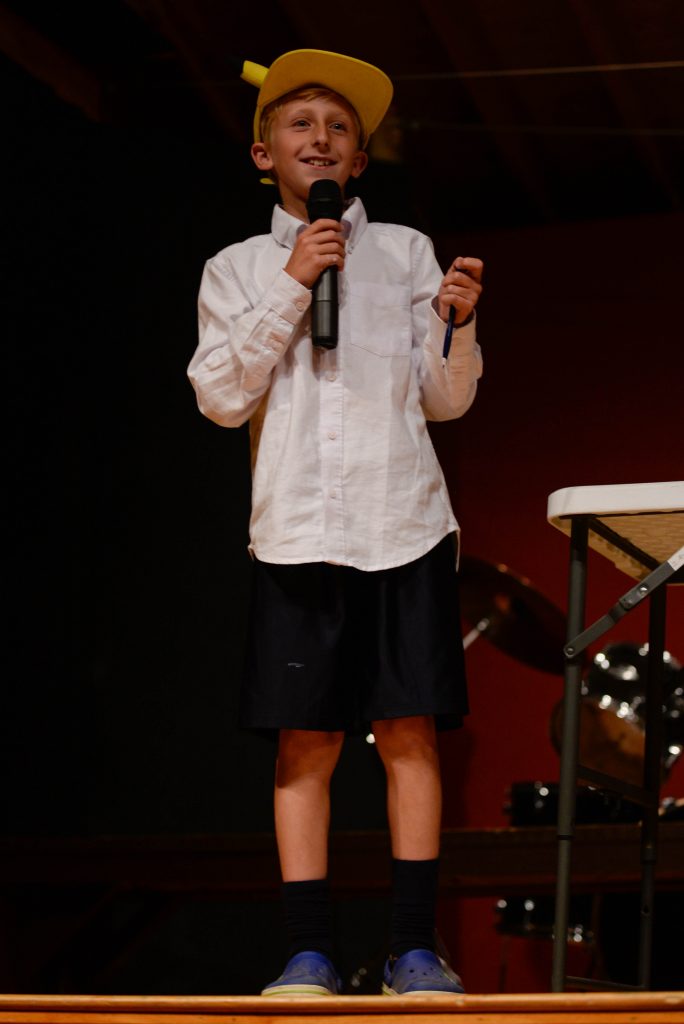 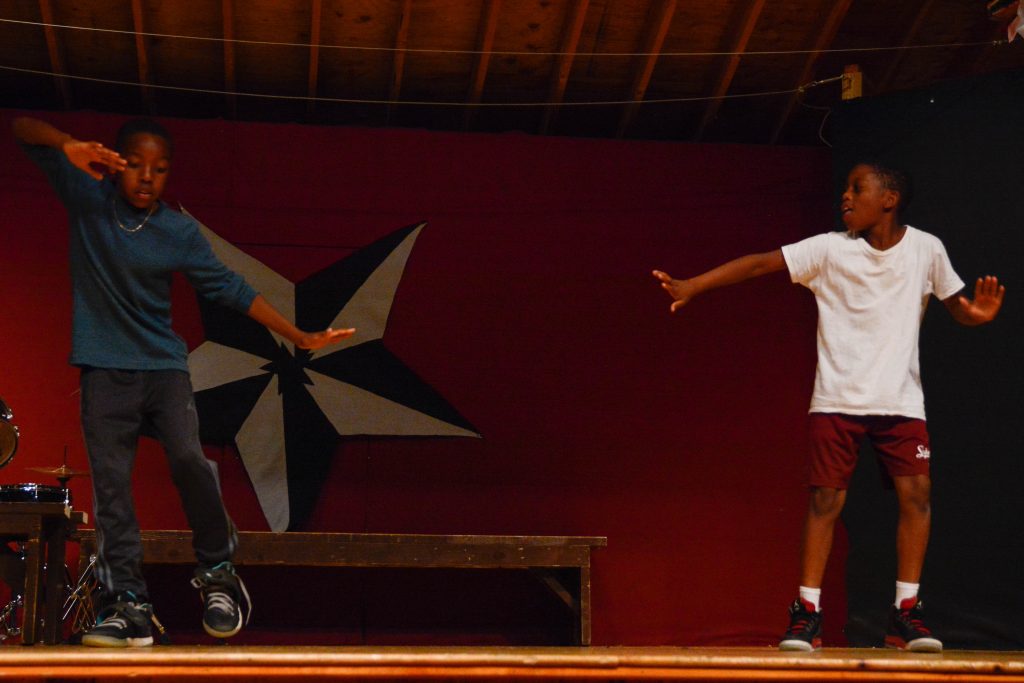 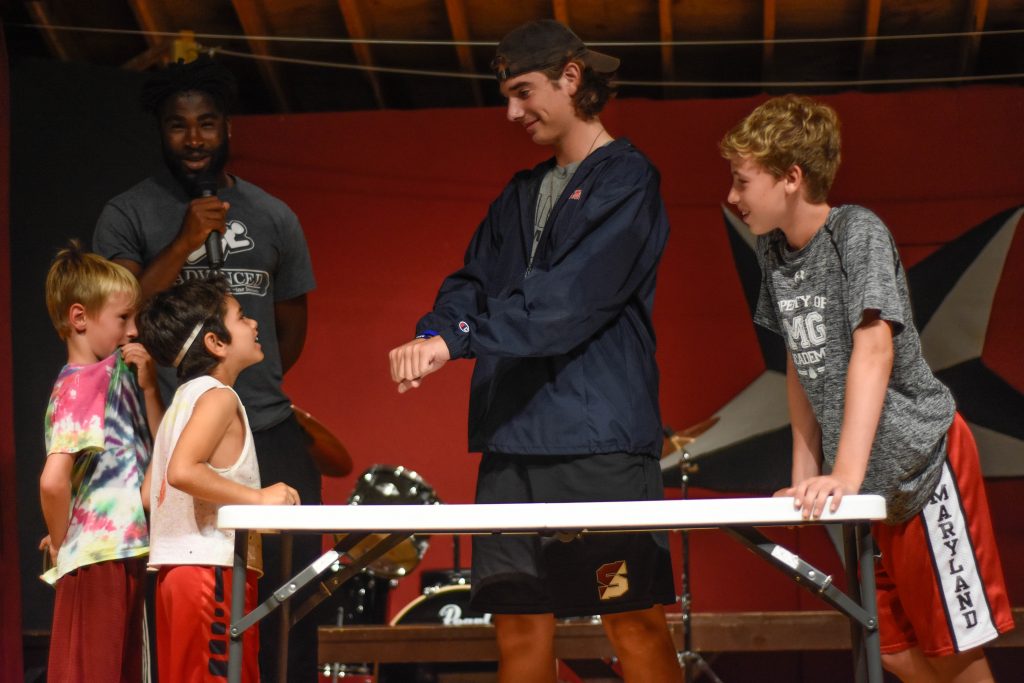 If you want to know what Skylemar’s all about, come to tonight's Talent Show. It’s not really necessary to tour the facility or read the brochure. Instead just come to the one-hour snapshot of time, and walk out with a full understanding of the warmth, camaraderie and caliber of people here at Skylemar.

#1: We’ve got talent. Our guys are bright, sharp, creative, musical and funny. For example, take Owen M from California. He’s only been here ten days, yet he comfortably stood on stage with the pressure of 300 people watching and recited 1,200 digits of pi. Did you catch that? Even just reciting a thousand numbers would be tough, let alone the ones associated with pi.

Then there was the Skyman Group. In the fashion of Blue Man Group, Nate P built a fantastic set, while Jordan B dressed in a black morphsuit played the drums on a garbage can. Meanwhile, a mystery morph poured paint on the can. Talent meets art meets the Gerhard Stage.

Alexander S was remarkable on the piano. He played an elaborate piece which he had completely memorized. Levi had our jaws dropping. He did a headstand for a very long time.
Holden and Joey M (with Bennett R as the timer) together did the rubics cube in 32 seconds. Dylan M’s magic trick with random numbers was very impressive too. He even dressed the part with a white button-down shirt and Pokemon hat.

#2: On the other hand, we don’t always have talent. We’re just regular guys. Nevertheless, we learn to laugh at ourselves, and quickly figure out that our friends, the audience, are on our side. For instance, Cash sang an old favorite: “The ABC Song”. By the time he got to “H”, everyone was singing along.

Harry and Cosme did a skit that we really didn’t understand, but that didn’t matter. They made a sign that the audience really couldn’t read, but that wasn’t important either. We weren’t clear on whatever Harry was doing to the hands of a counselor, but bet people will be saying, “do it to me!” all day tomorrow.

Lip-synching might not exactly go under the “talent” category, but definitely goes under “funny”. Aidan F, Evan R and Sam S (Bunk 11) performed a memorable rendition of “I Got Sunshine In My Pocket”. Andrew B definitely surprised us with a solo rendition of “Let It Go”, complete with hand motions and stomping.

#3: We enjoy sports here. Johnny H and Carson showed off several one-handed football catches. Max S and Jacob R of Bunk 1 exhibited their hockey skills, with Jacob's stickwork and Max's goalie glovework on display. Ari M balanced a lacrosse stick on each finger individually. Each finger had a turn – pinky, pointer, and so forth.

#4. We have fun. Especially those on the stage, for they are the most important. Will S and Zane did a skit they called “Something Funny”. We couldn’t really tell what was happening, but since those on the stage thought it was funny, we in the audience did too. Plus, it was called “Something Funny” so we laughed along with them. You get the idea. Good, wholesome boy humor.

#5. Everyone knows everyone at Skylemar, despite age. We’re a band of brothers, so all feel at ease when performing. Isaac G had a double act, first playing “Taps” on the guitar. Then, he took the mic and sang “Wagon Wheel”, bringing the crowd to its feet in a rousing standing ovation.

Our once-quiet Andrew L spoke boldly to the whole camp as if he did it every day. He performed card tricks. It was a bit hard to see, but the audience clapped and cheered wildly as ever. After all, he’s our brother.

Soren, Oliver D and Leo did a silly skit with bottle flips. Leo was his regular outgoing self, but we were extra impressed with how comfortable Oliver and Soren were as they cracked up on stage. “Breaking character” is perfectly acceptable in our rule book.

Logan A (on guitar) and Corbin (on piano) played a duet of a camp song, “Mountains North and Mountains West”. The audience sang along,linked arm-in-arm without any adult telling them to do so.

Talk about comfortable: Bunk 28’s Josh, Jack, Zach, Patrick, Alexander, Oskar, Ty and Quinn did a “Quinceanera” skit. Perhaps this should go under “funny”, for it definitely was. These guys have been brothers for years, and everyone looks forward to seeing what they come up with.

#6. Our older guys take care of the younger ones. Younger ones idolize those who are older. There’s cheering and clapping, whistles and standing ovations. Littles sit on laps of bigs, and everyone listens and watches intently.

Alex N’s act was a bit longer than the rest, with “three parts”. First, he played a song we didn’t know on the piano. Then he played one that we did – The Charlie Brown Song. And then he recited the 13 digits of E. Standing O for Alex!

#7. Our counselors are the greatest. In fact several gave up their night off so they could watch their own kids perform. Or, in the case of Austin’s “Lemonade Stand” skit, counselor Travis stayed back to be in the the show. That was another one we didn’t understand, but laughed and cheered all the same.

Overall, there are no rehearsals and no time to plan for the Skylemar Talent Show. Just do it, have fun and feel good. If you were there, you’d be filled with emotion. In fact, it’s hard for a parent not to get teary. There’s so much to be proud of.

"What makes Skylemar different is how much the counselors care about their campers."