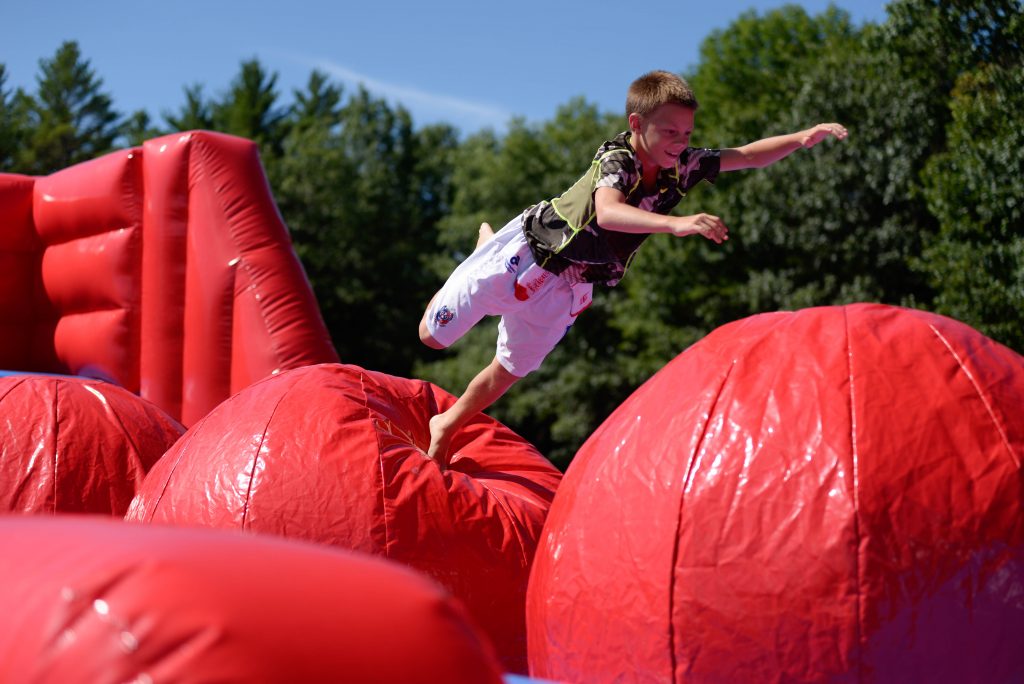 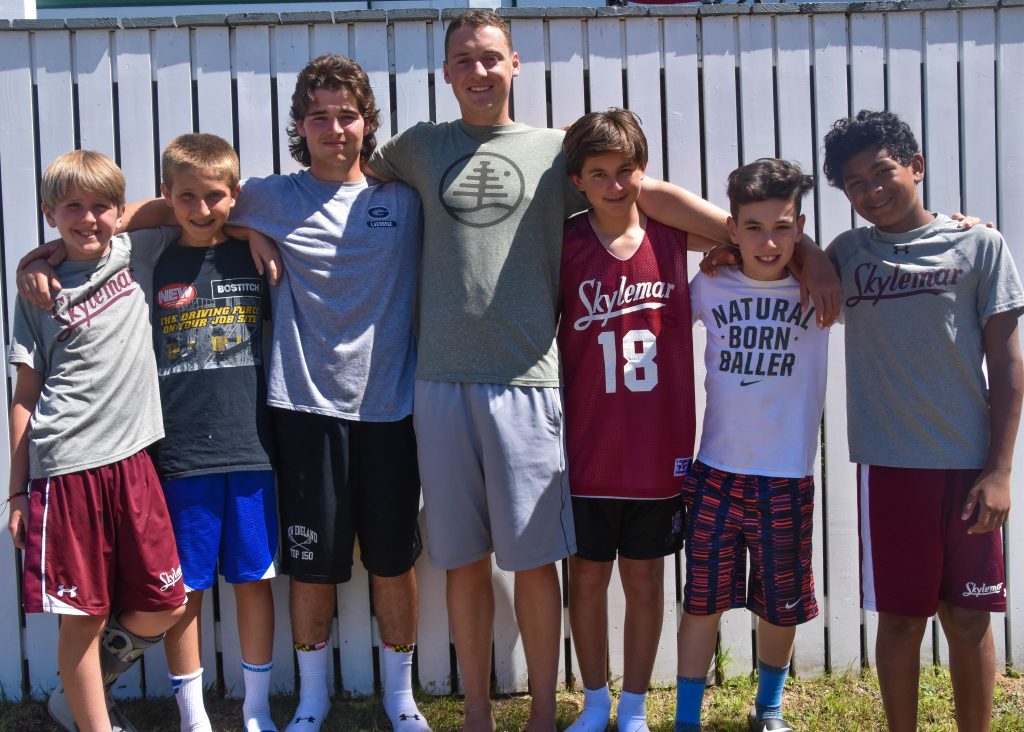 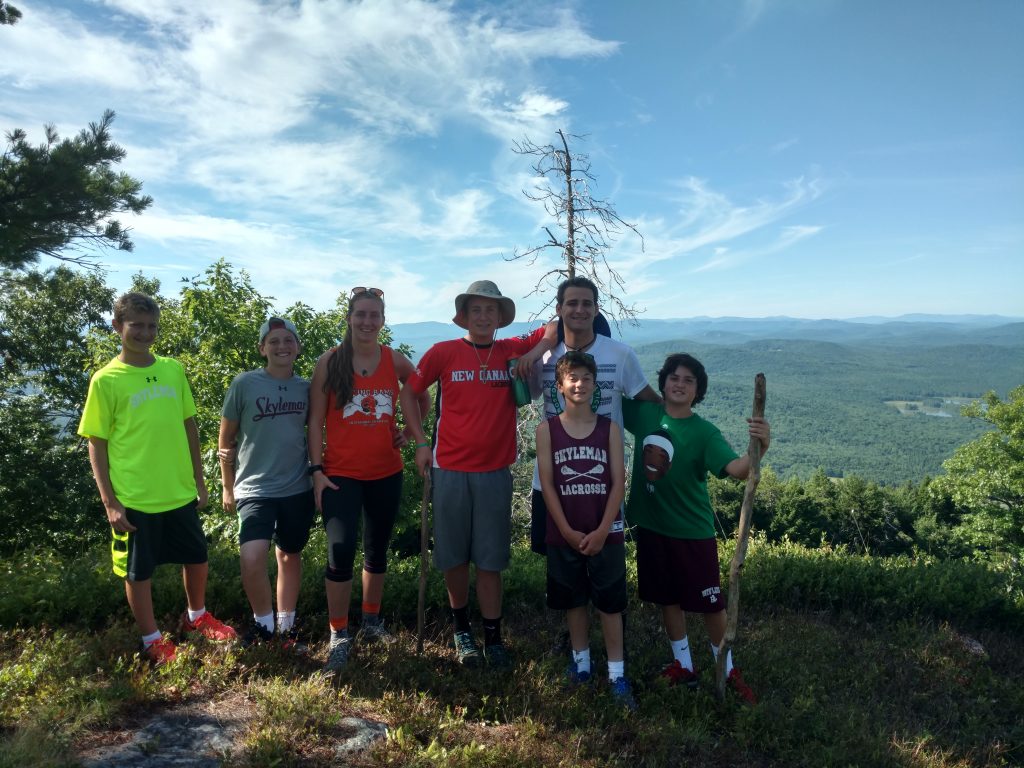 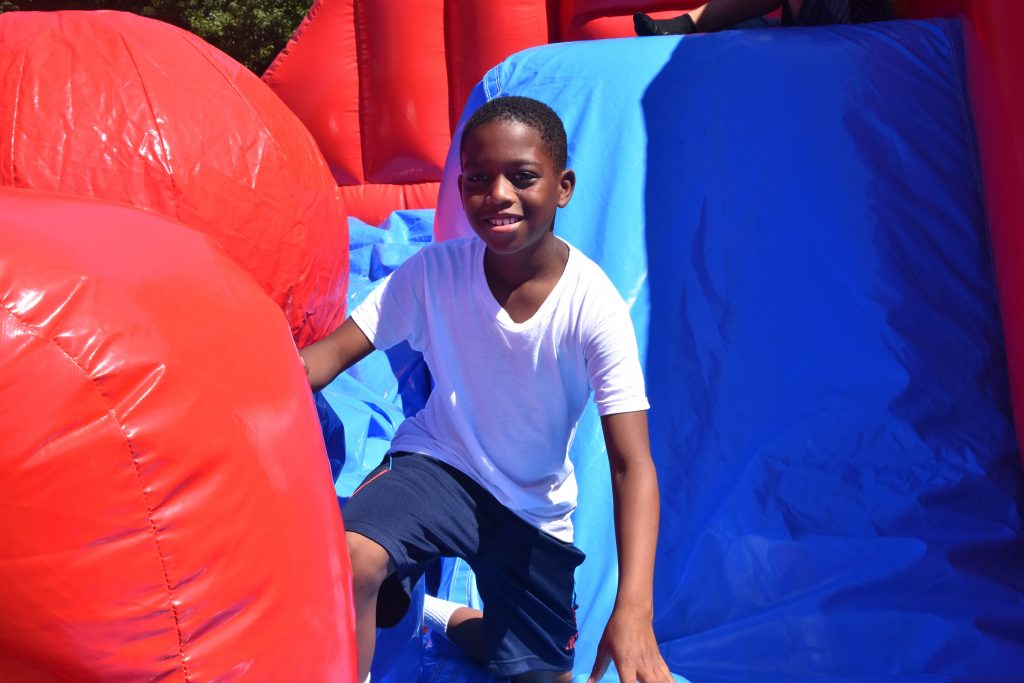 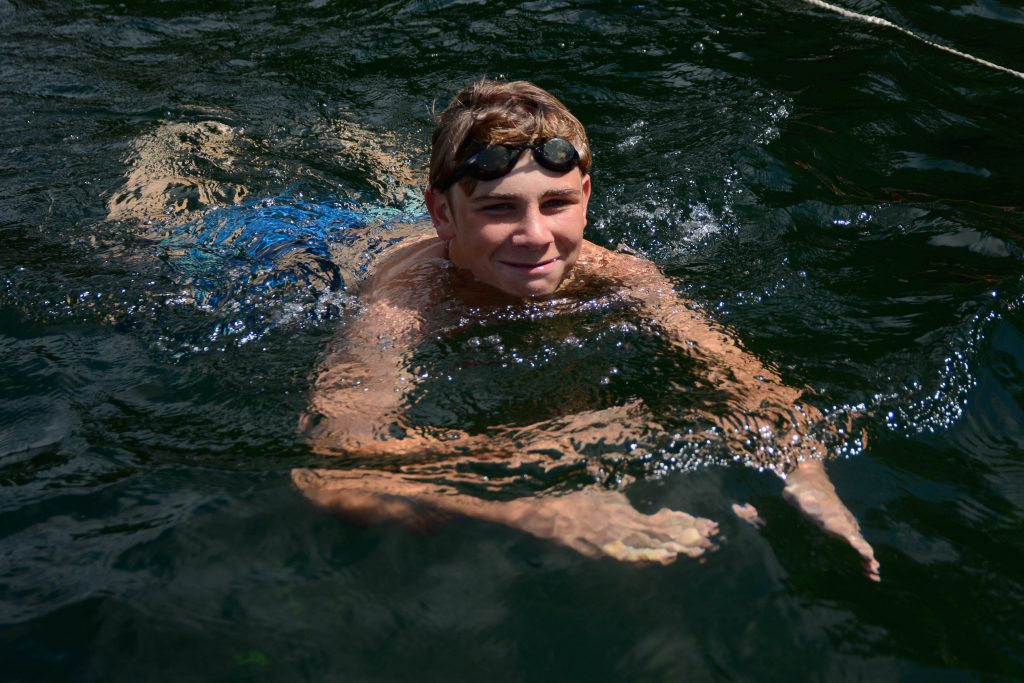 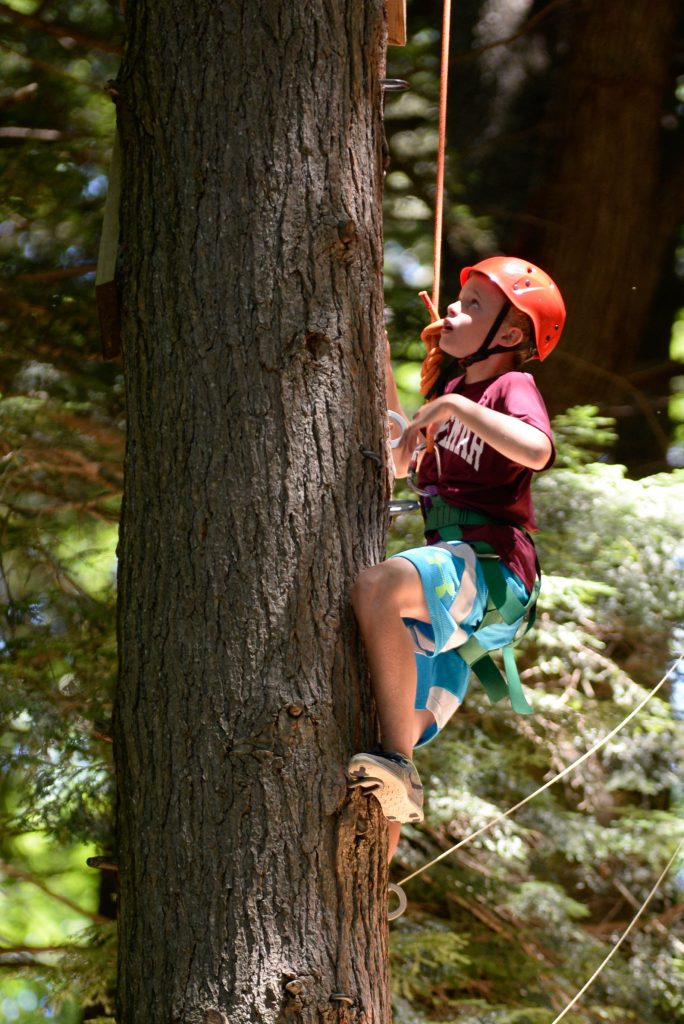 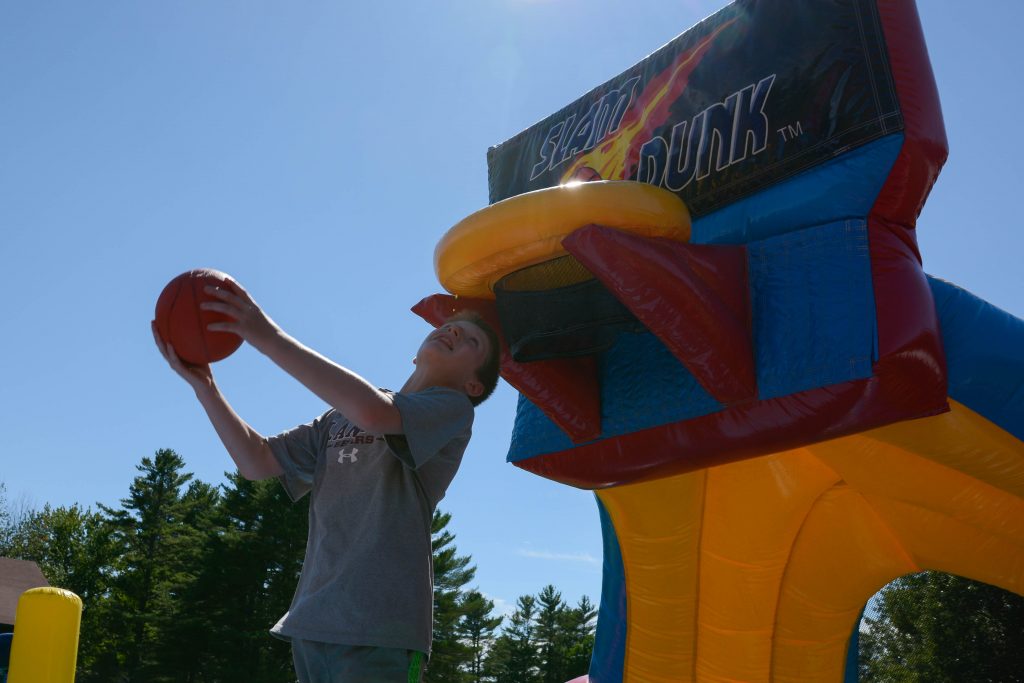 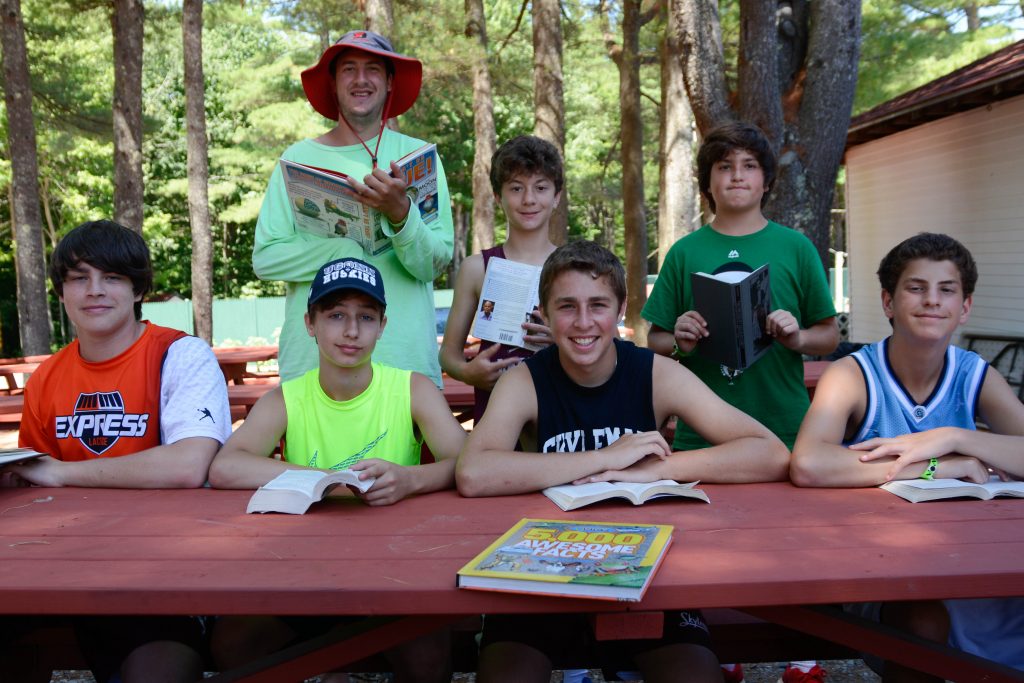 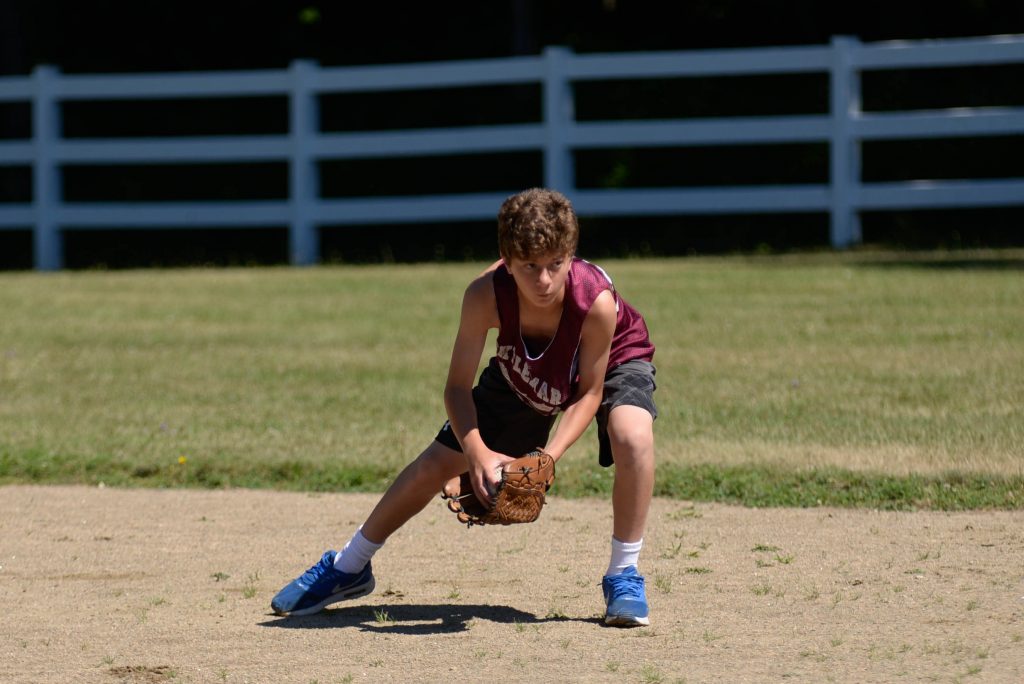 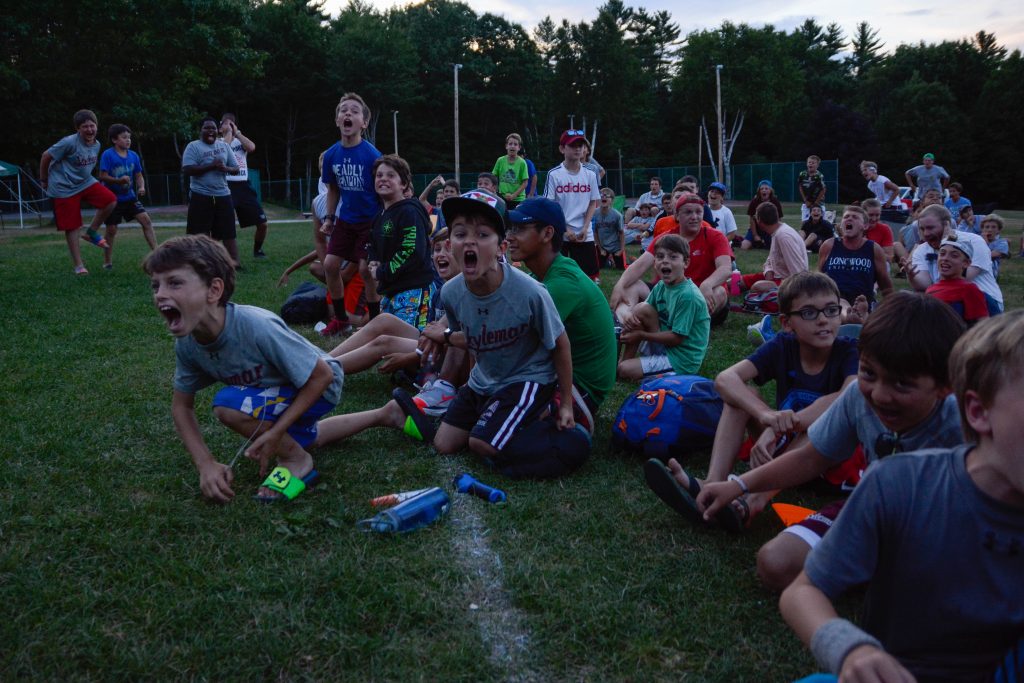 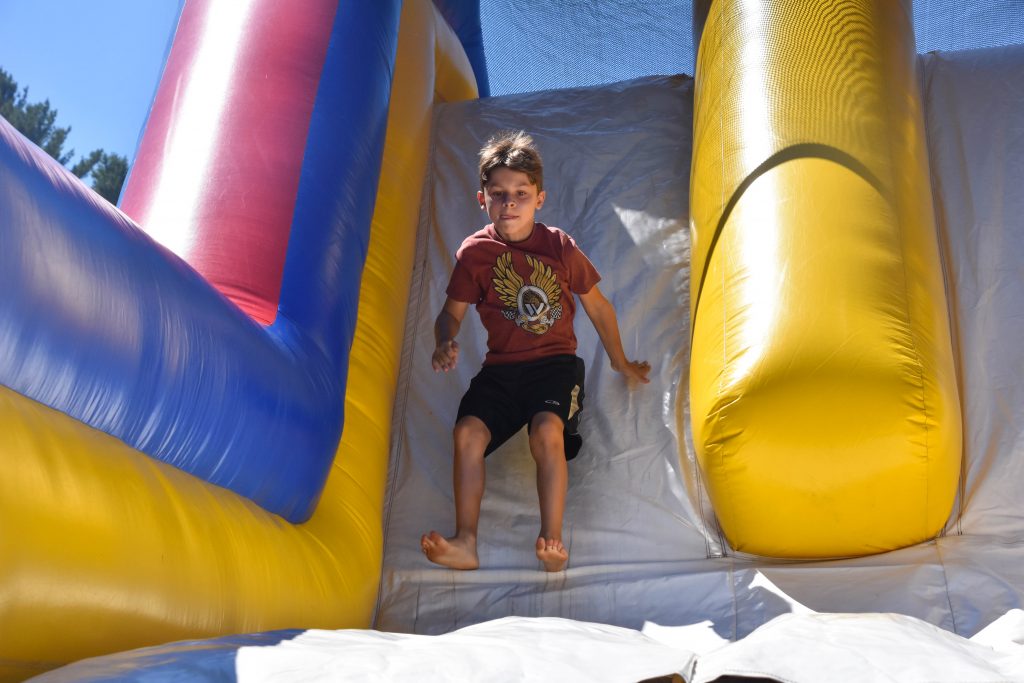 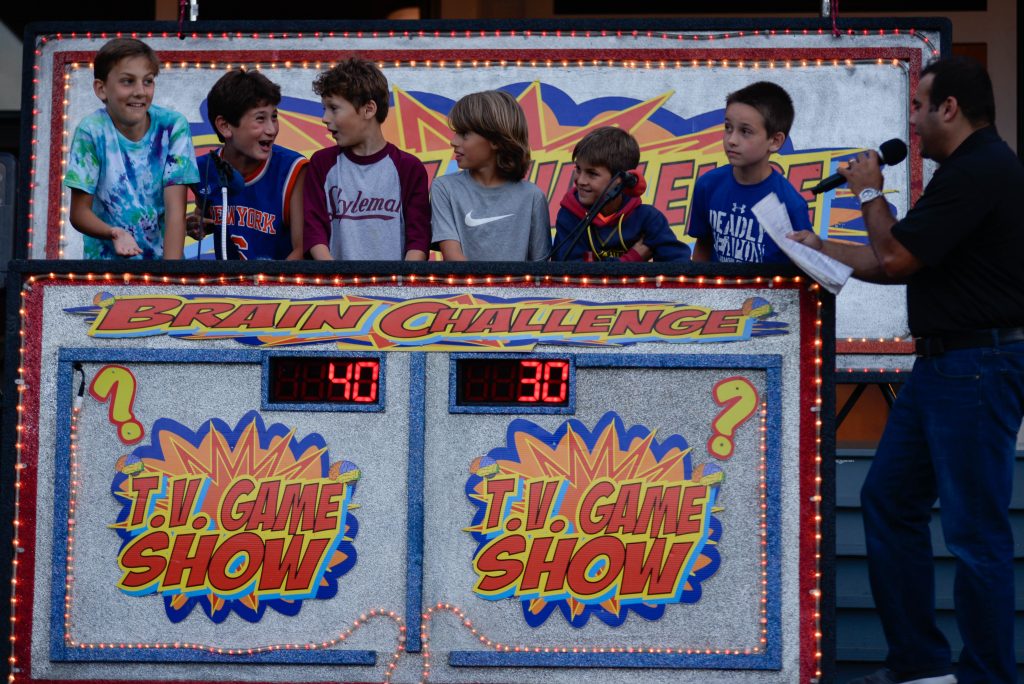 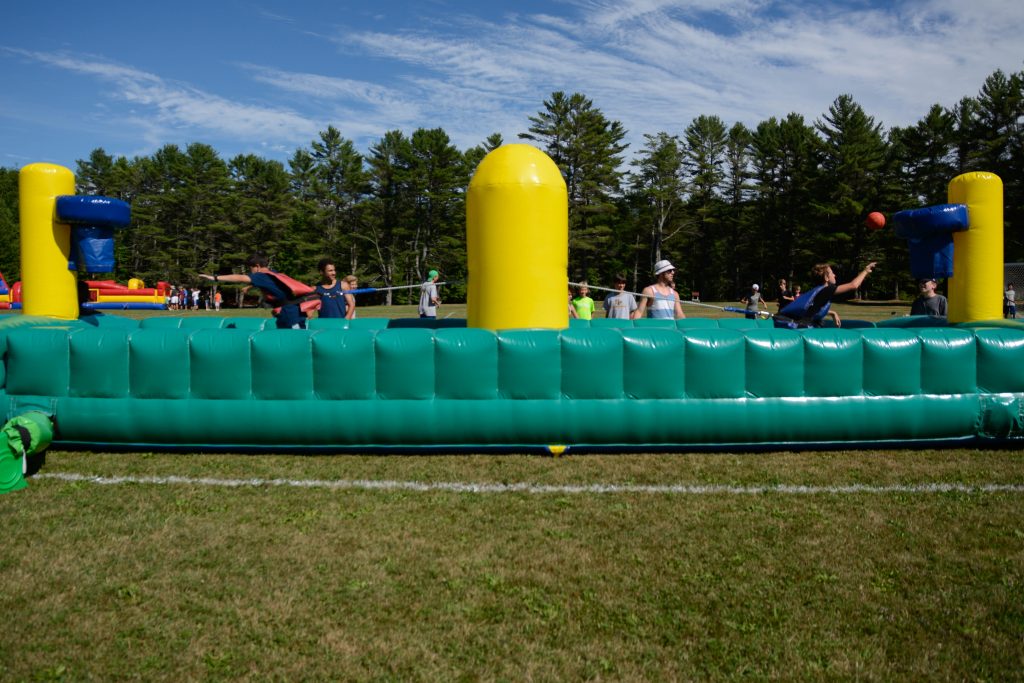 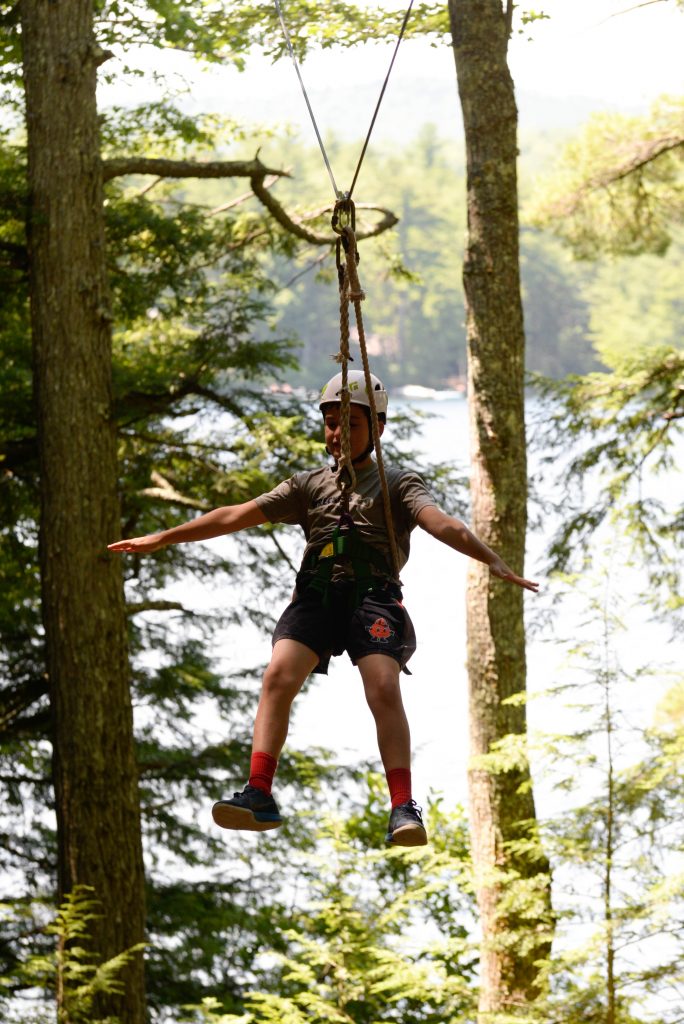 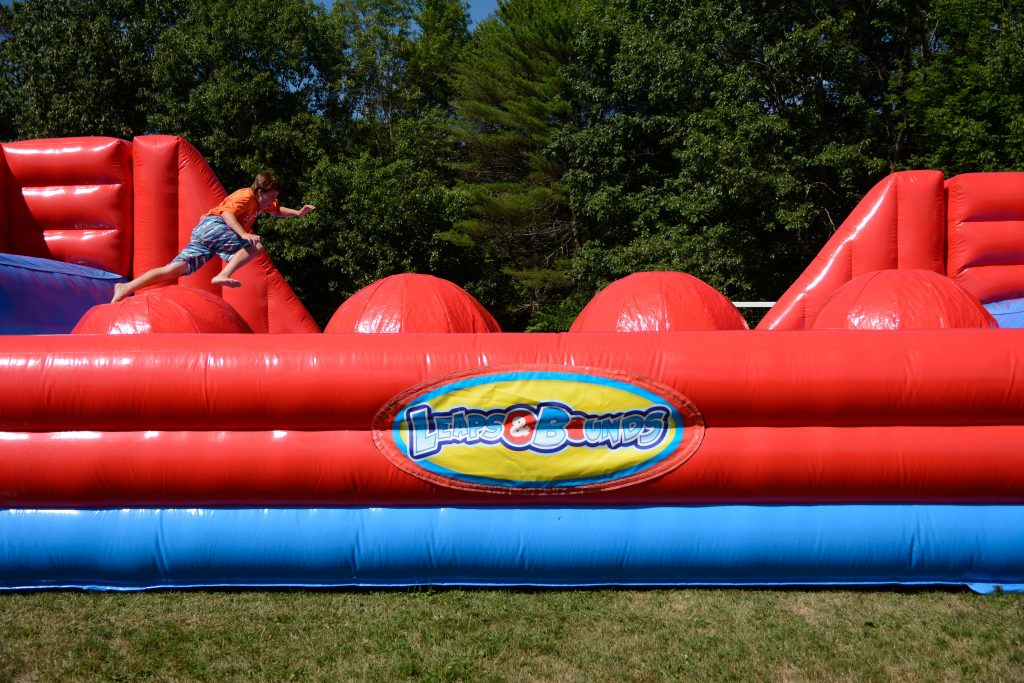 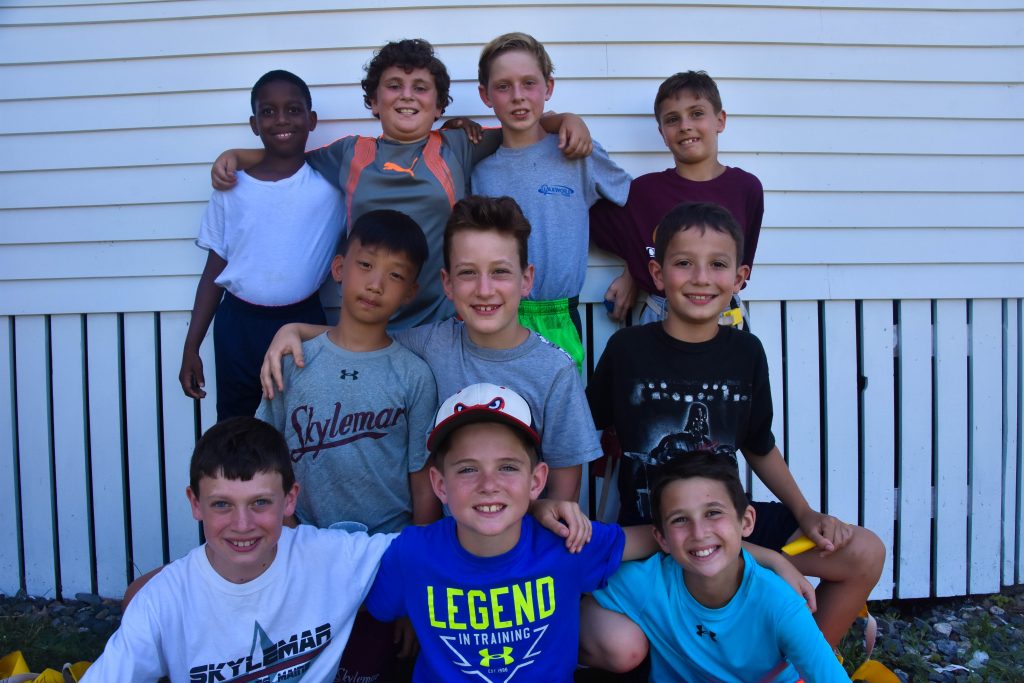 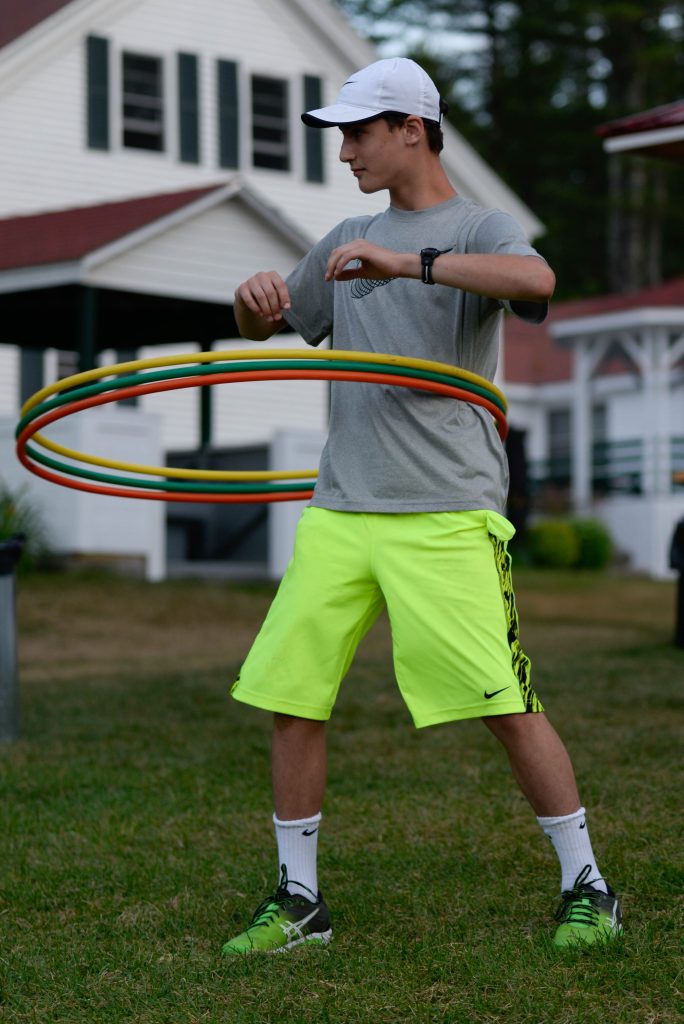 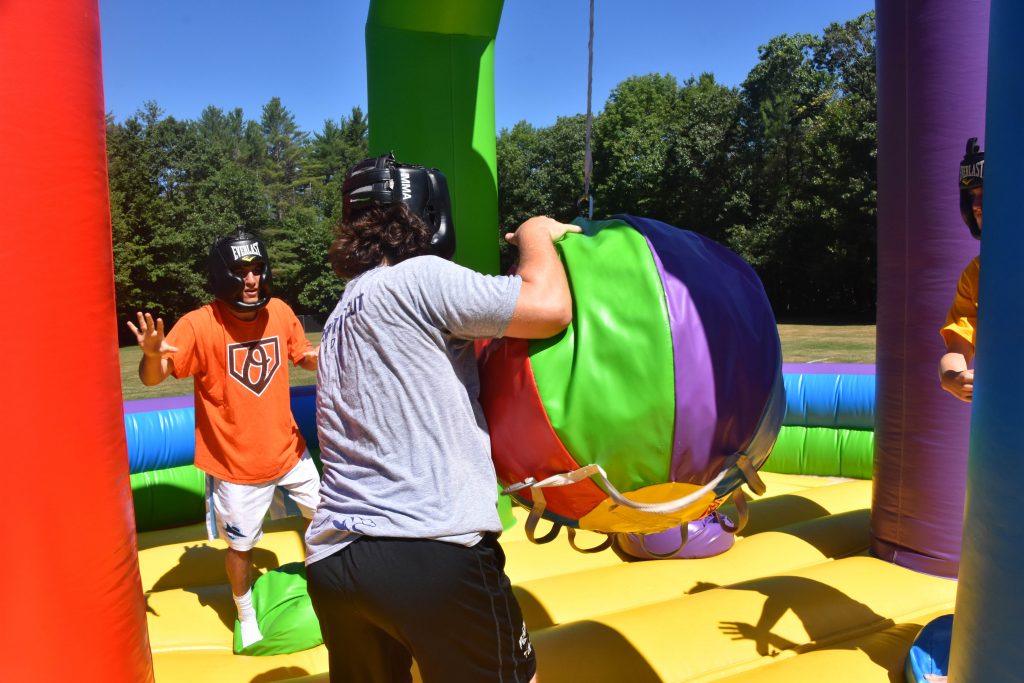 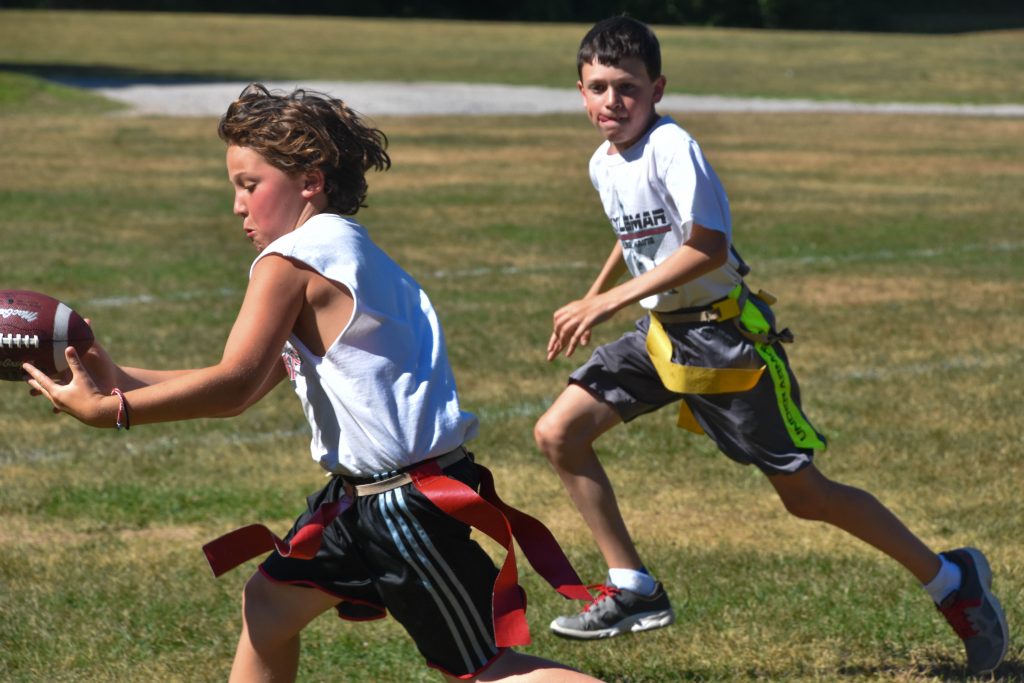 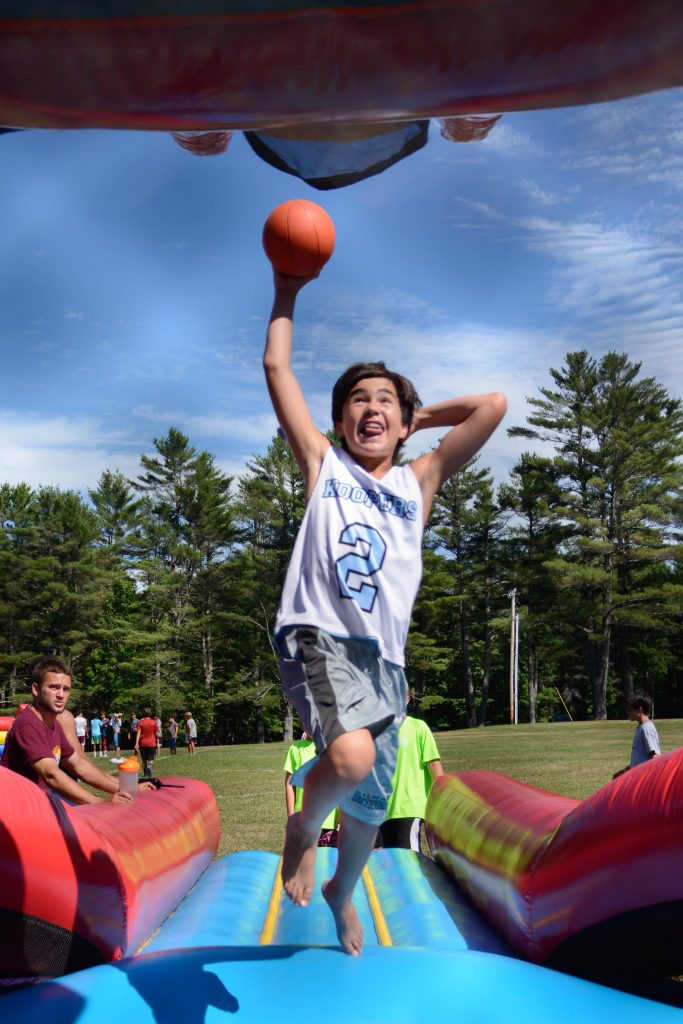 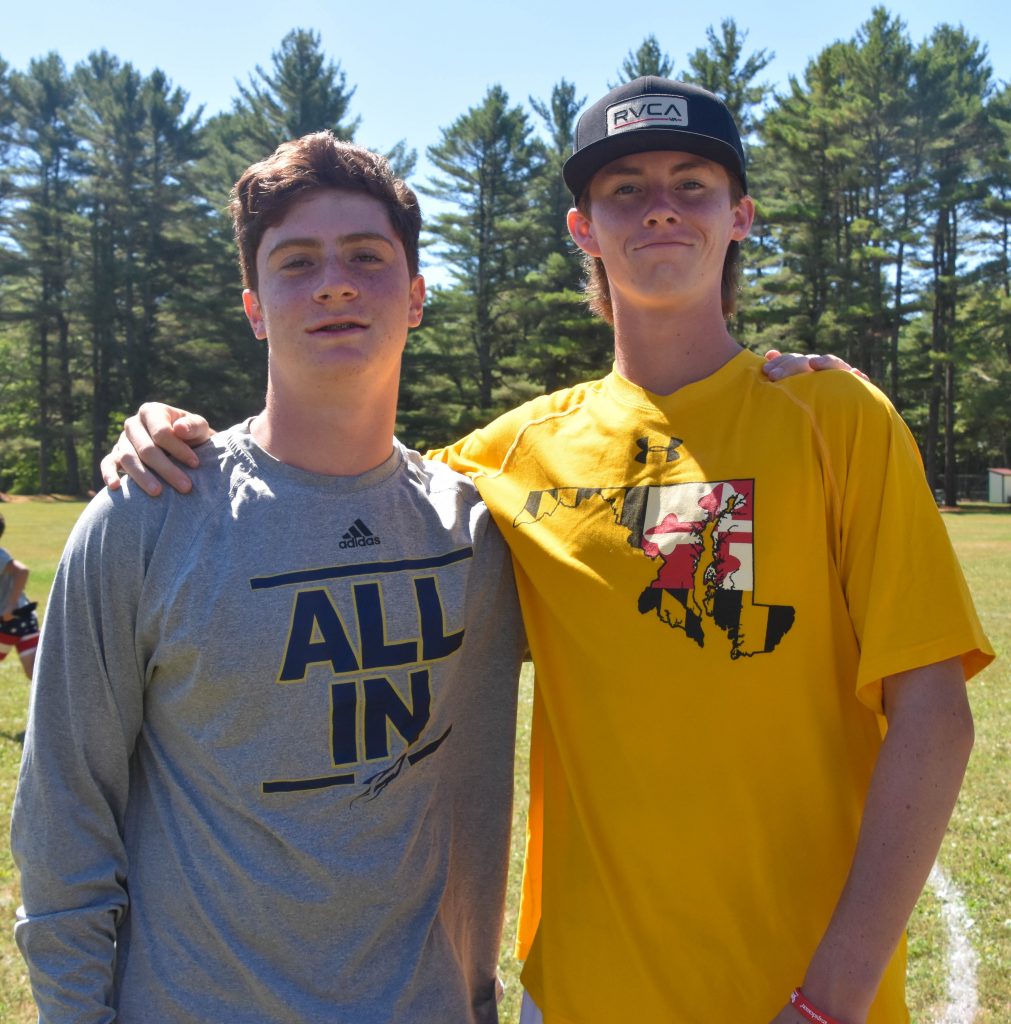 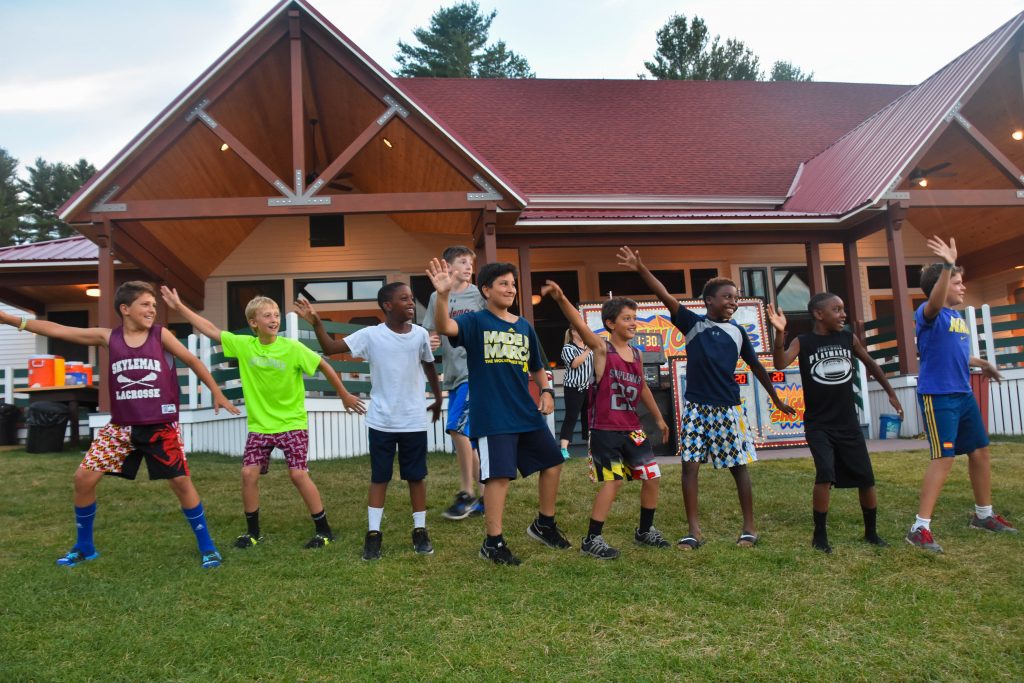 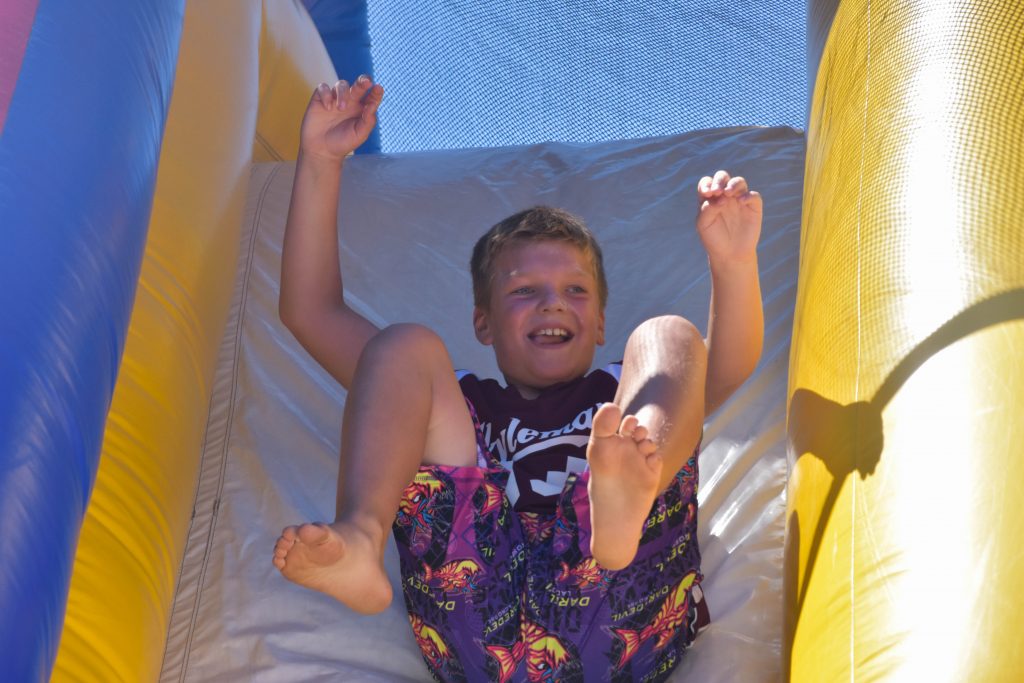 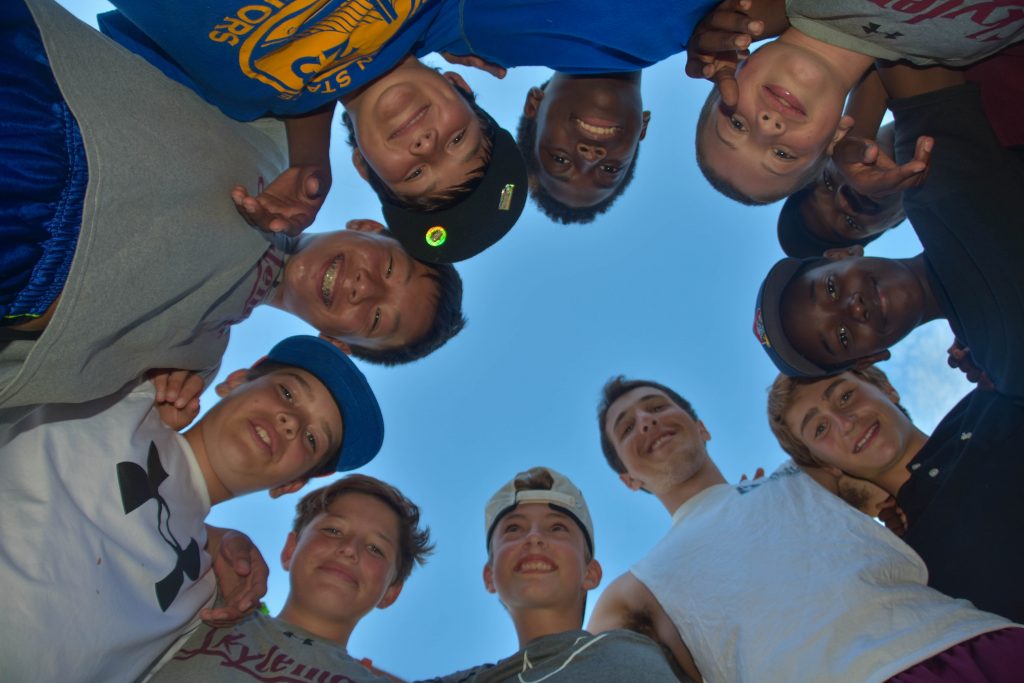 Warm temps and blue skies. Perfect conditions for the Blow-Up Carnival. There was the Rock Climb Challenge Obstacle, Wrecking Ball, Slam Dunk, Dual Sports Bungee Challenge and the Big Baller. So much fun to kick off your shoes, jump and climb. Bunks 1-11 had the morning, while 12-28 had the afternoon.

In between was lots of waterfront, with impressive instruction. It’s pretty amazing to watch the counselors teach, especially at the lake. They do whatever it takes to get the kids to understand and improve, often swimming along with them.

Mountain Hike for those who wanted to go. Sam H, Jack W, Jordan B, Leyton, Danny R and Izzy made it to the top of Pleasant Mountain in record time. Others went Ice Skating in Bridgton. Plenty of room to skate with the rink to ourselves.

Noah’s Shelter Building clinic had their big night, sleeping in the shelters they built. All was great until around 10:30, when the bugs were too much for some. It’s interesting how mosquitoes clearly like some people more than others. Anyway, they headed back to the cabins before midnight. That still counts as sleeping in the great outdoors though.

Brain Challenge for Evening Activity. It’s a game show company out of NY that brings an elaborate set, and runs a fantastic evening.

Camp is divided into two teams: odd bunks vs evens. Contestants are selected to answer trivia questions and perform challenges, basically by age. For example, what state is made up of 120 islands? What’s a Granny Smith? How many strings on a violin? What’s the oldest major league ball park in use?

Challenges included a huge Simon Sez game. Izzy was the champion. That’s a whole lot of pressure to endure: full concentration while the whole camp is watching. There was a dance contest and a hula hoop showdown. Congratulations to Sam F for hooping three hulas together longer than anyone else.

As to the trivia part, Skylemar guys are brilliant, so the answers came quick. But there was one that stumped them all, which you may find as distressful as we did. The MC’s clue was, “Old people listened to music on these.” “A Jukebox,” said one boy. “A cassette player,” said another. Nope. MC gave another clue: “It’s black and round.” Silence. Finally one of them said triumphantly, “A CD player!” Nope. It took some help in the audience to come up with a record album. Perhaps we better play one for them tomorrow.

"What makes Skylemar different is how much the counselors care about their campers."