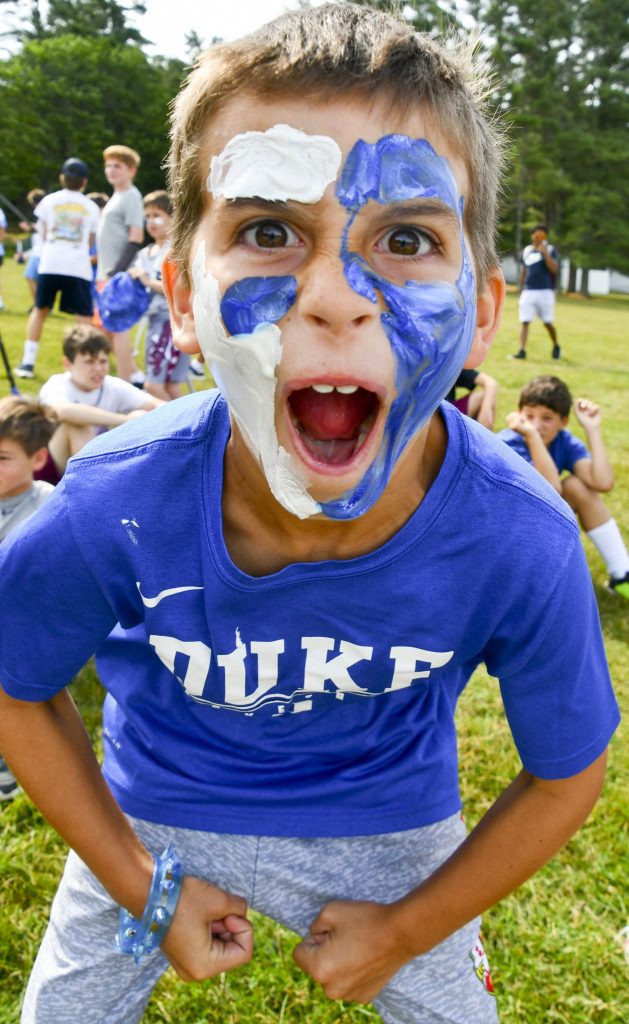 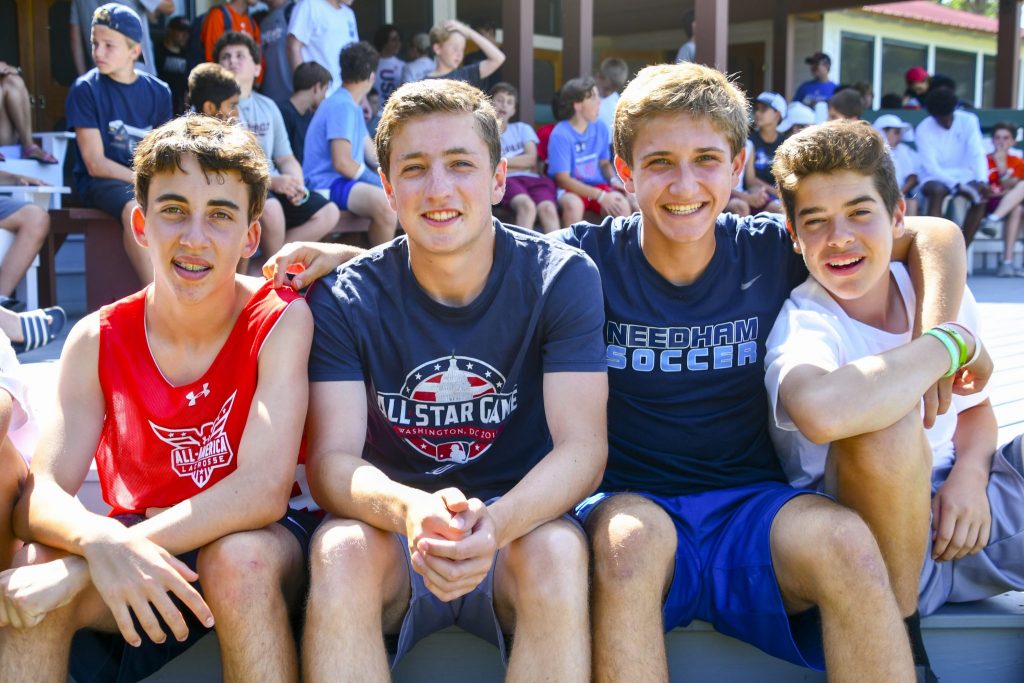 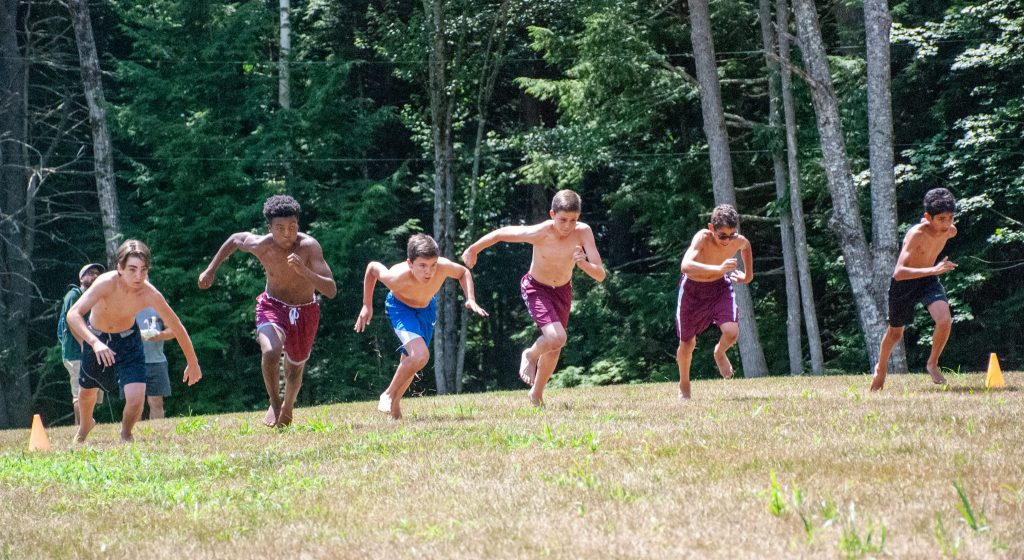 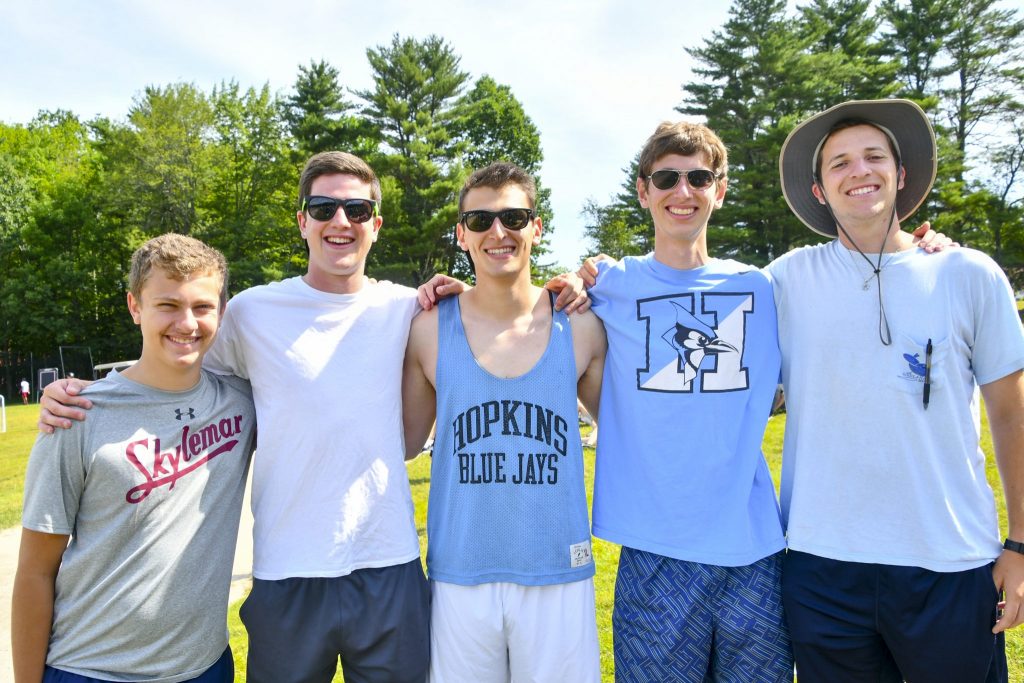 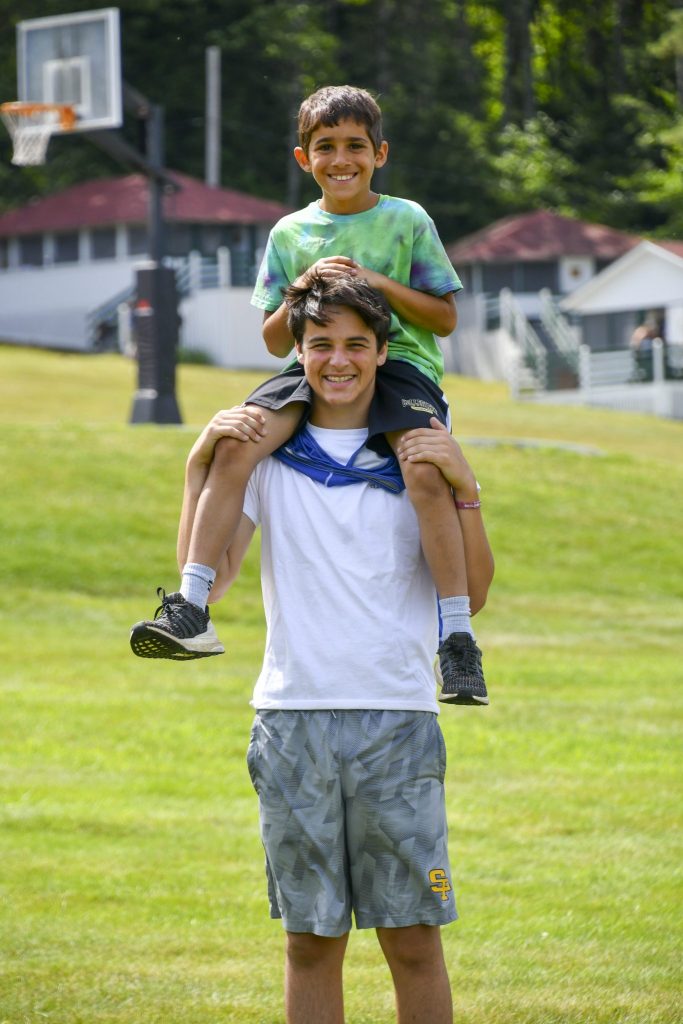 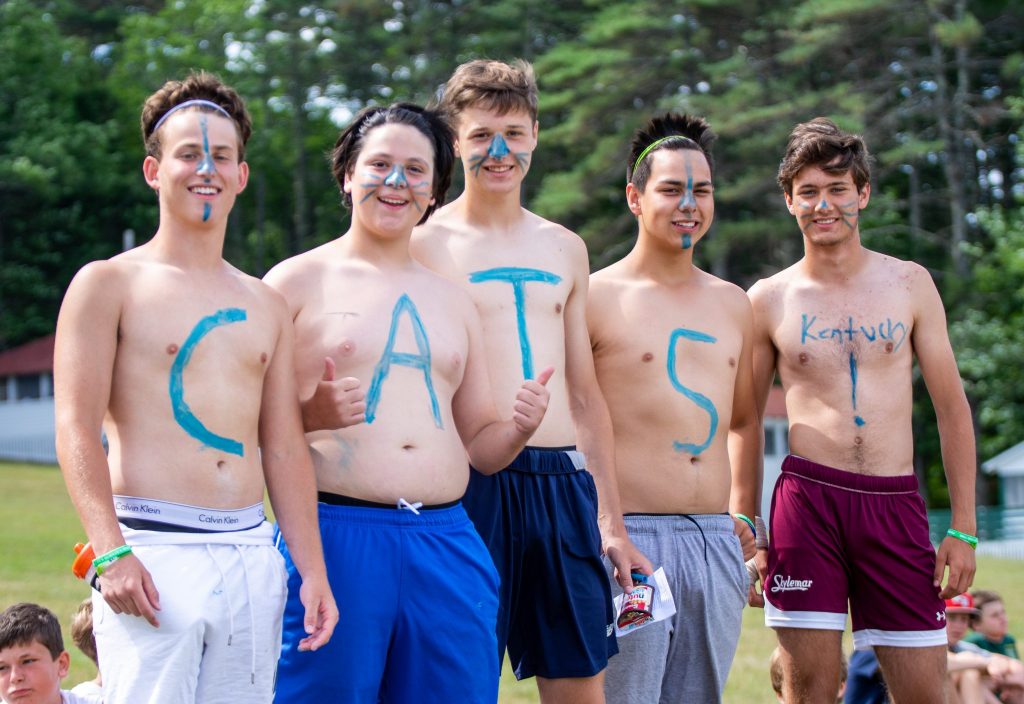 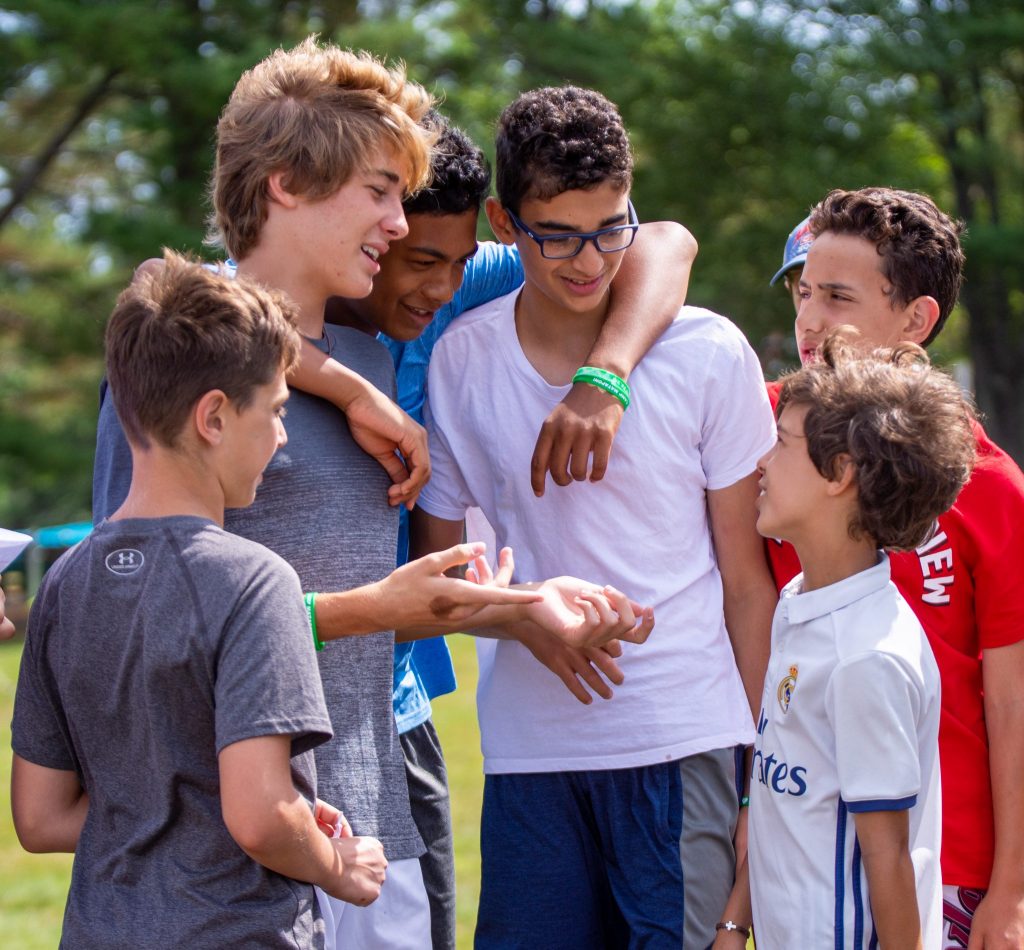 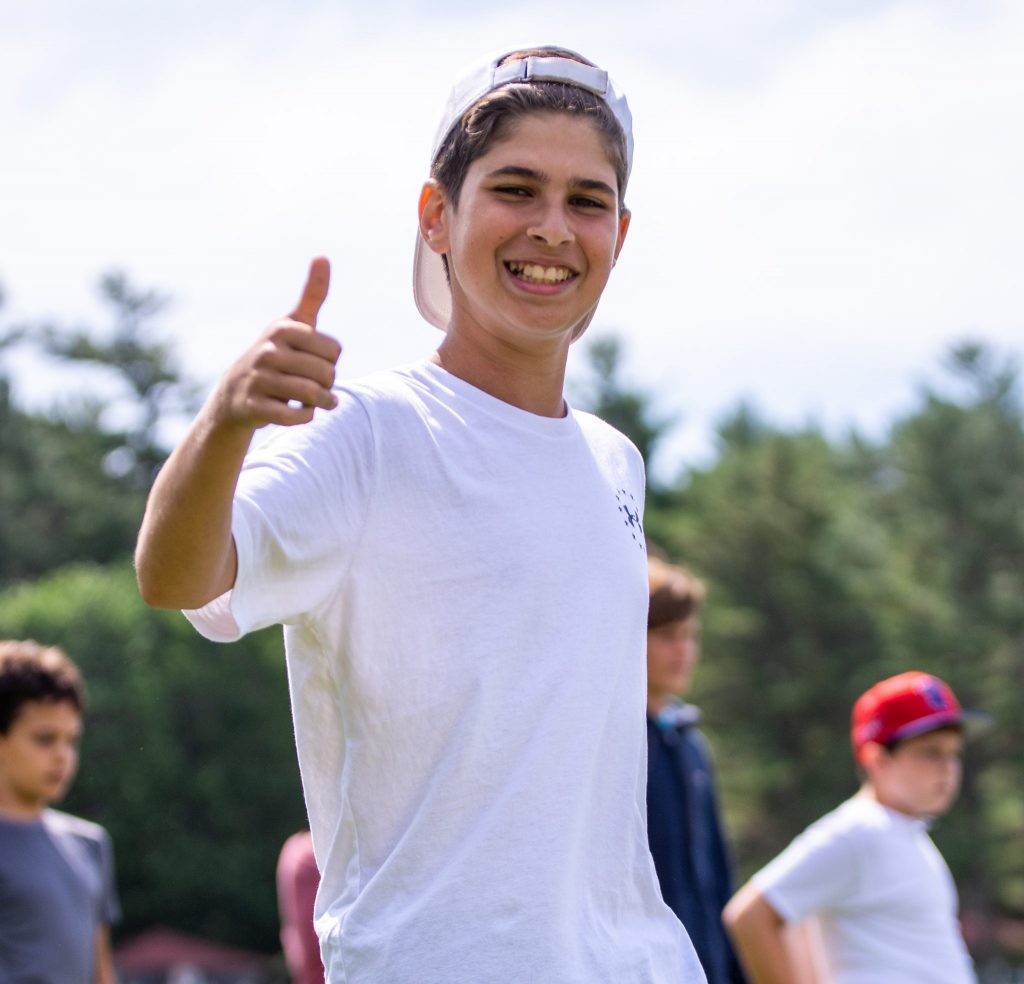 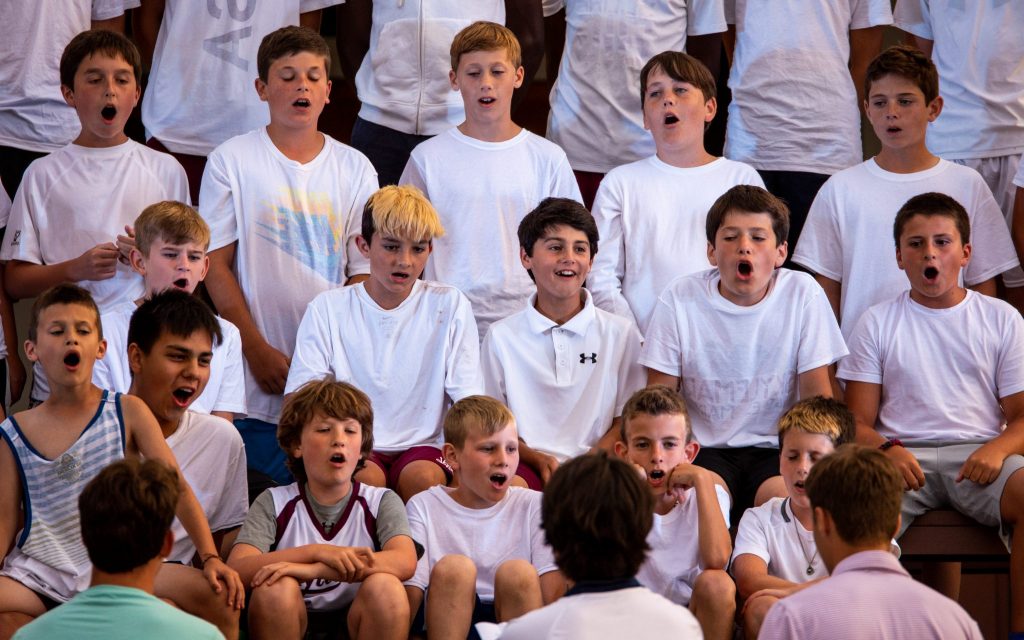 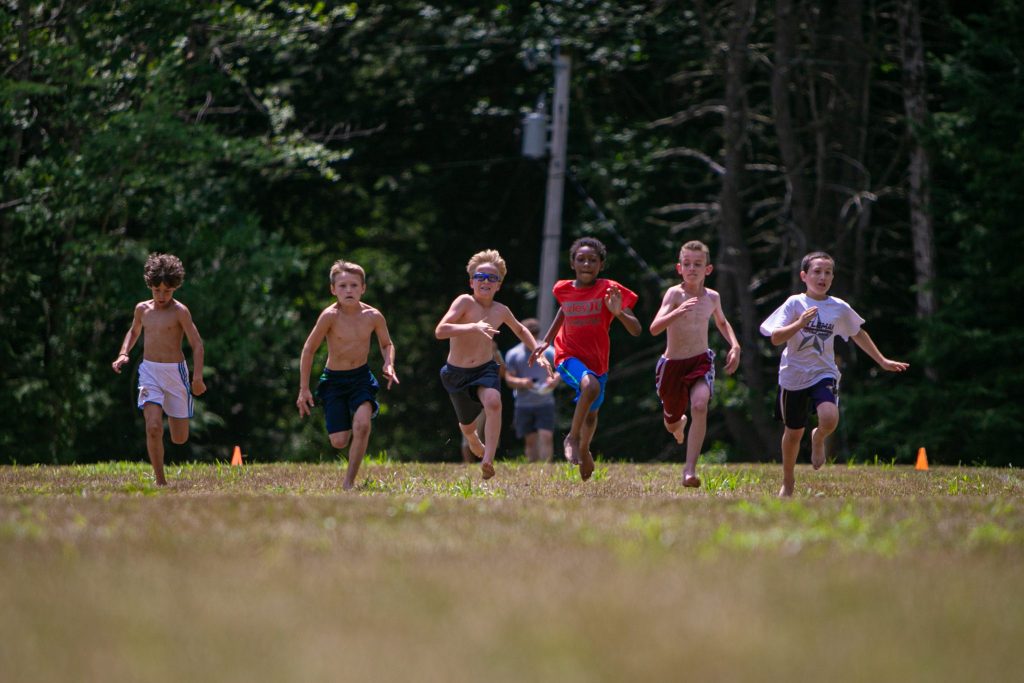 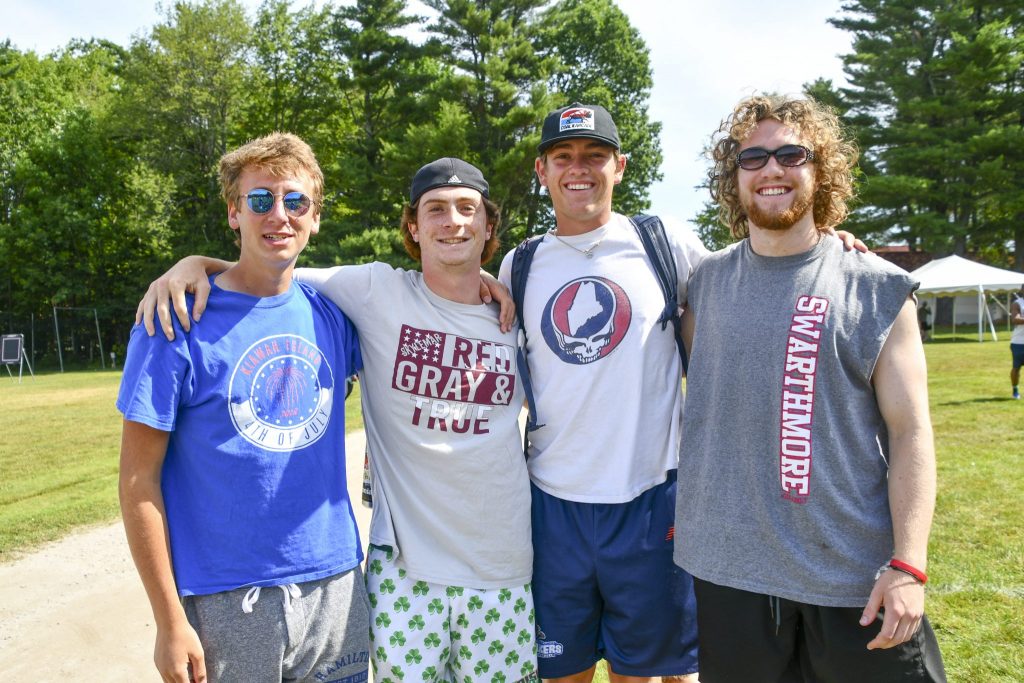 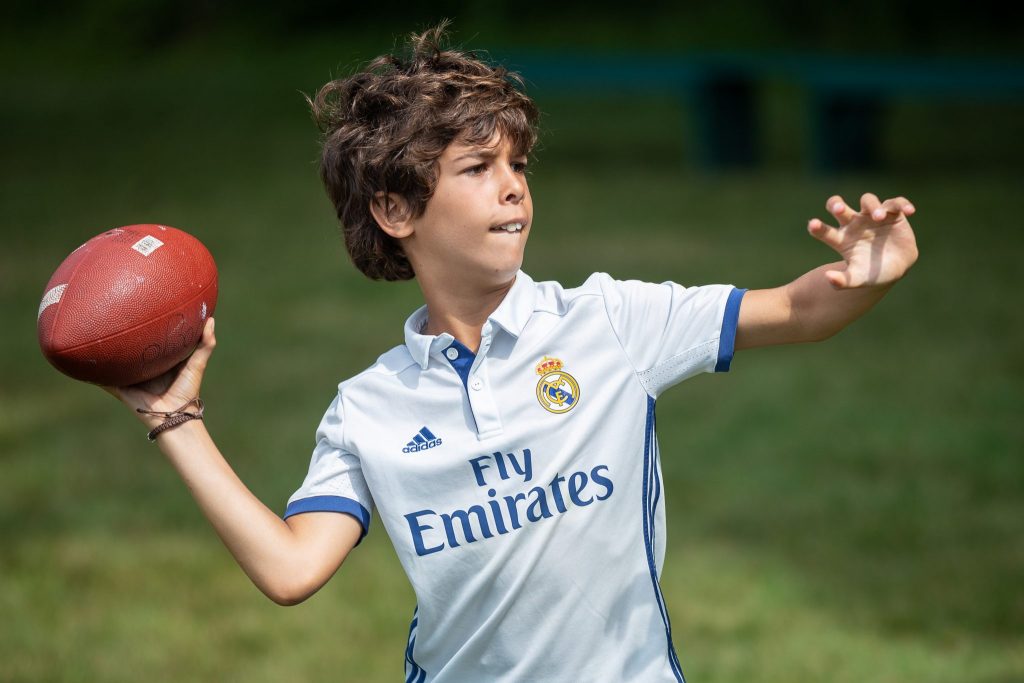 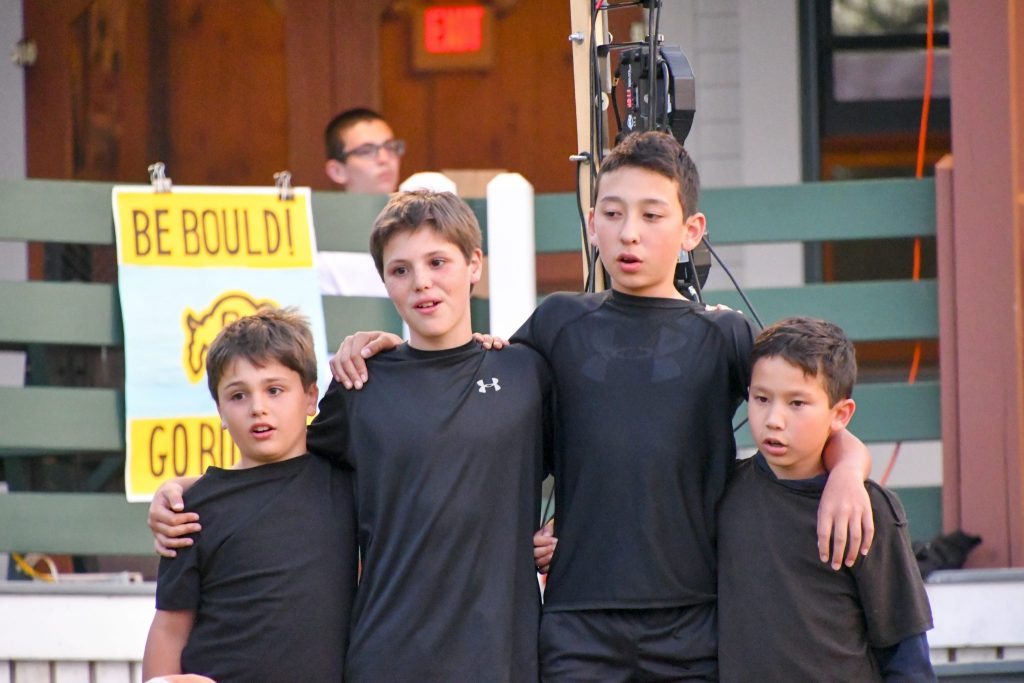 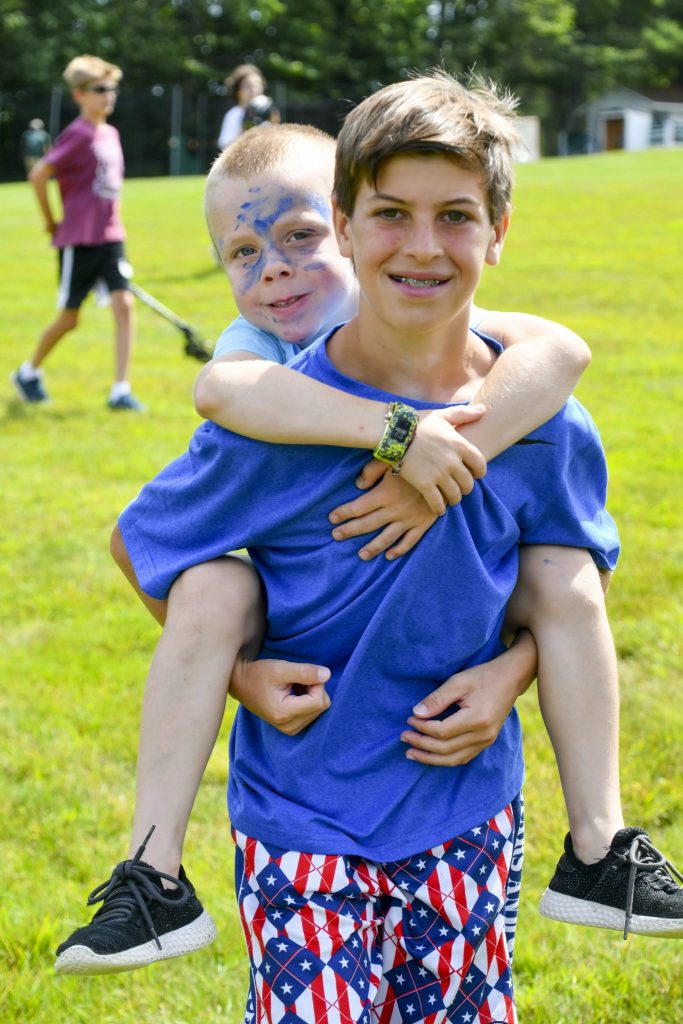 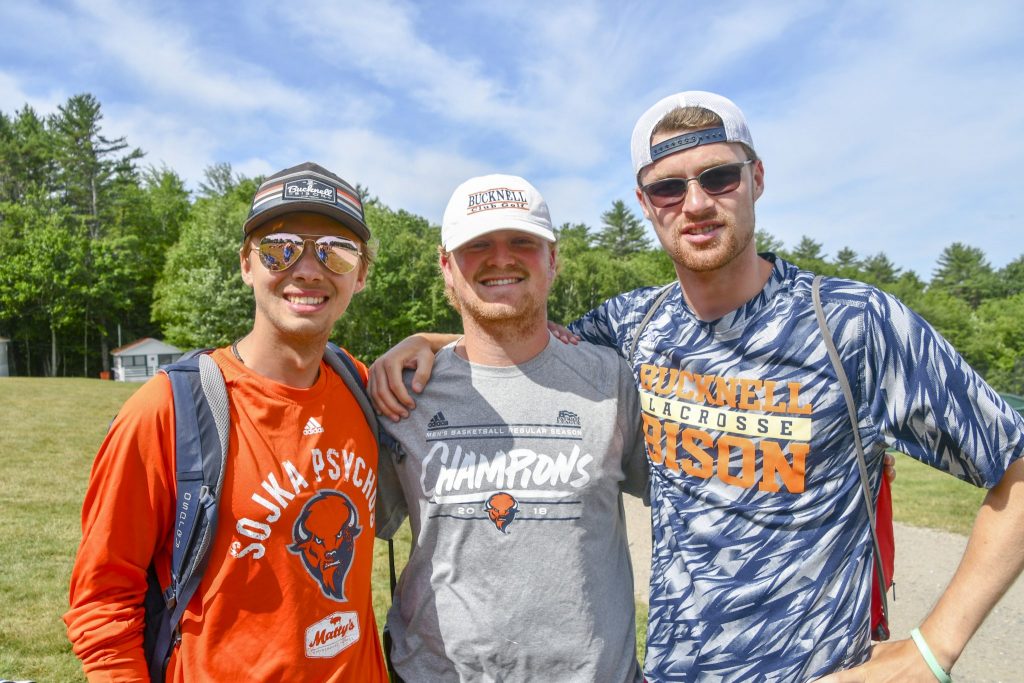 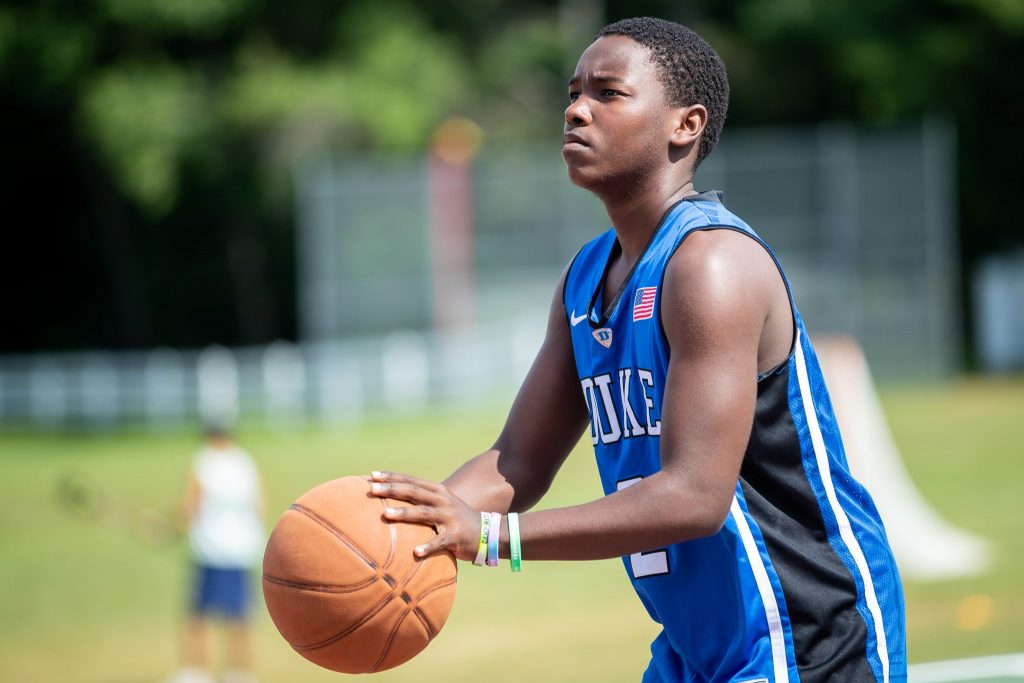 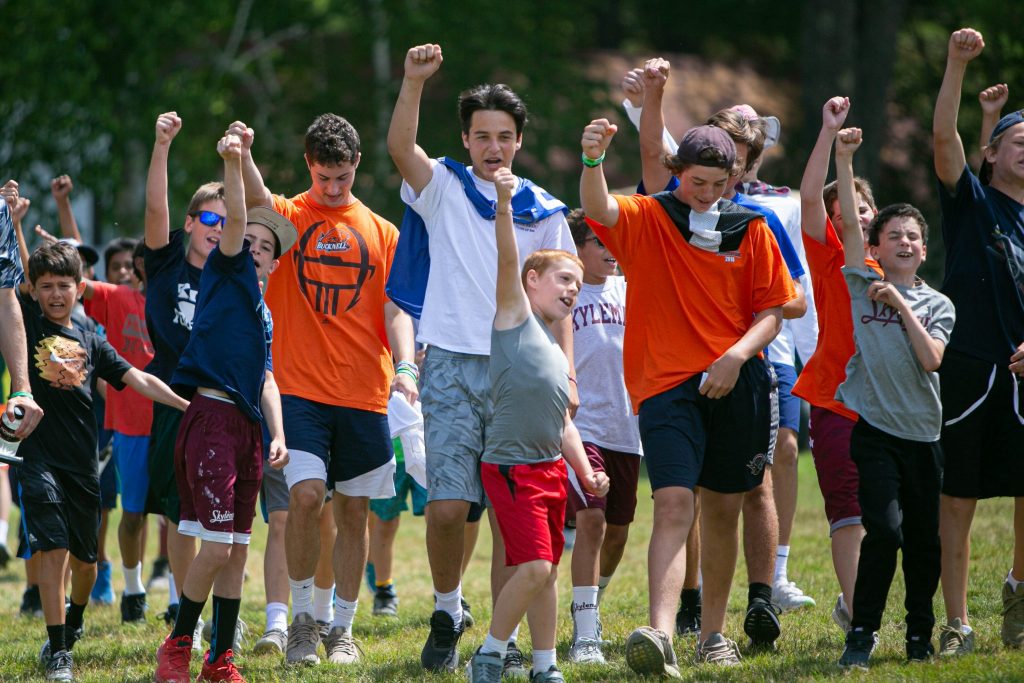 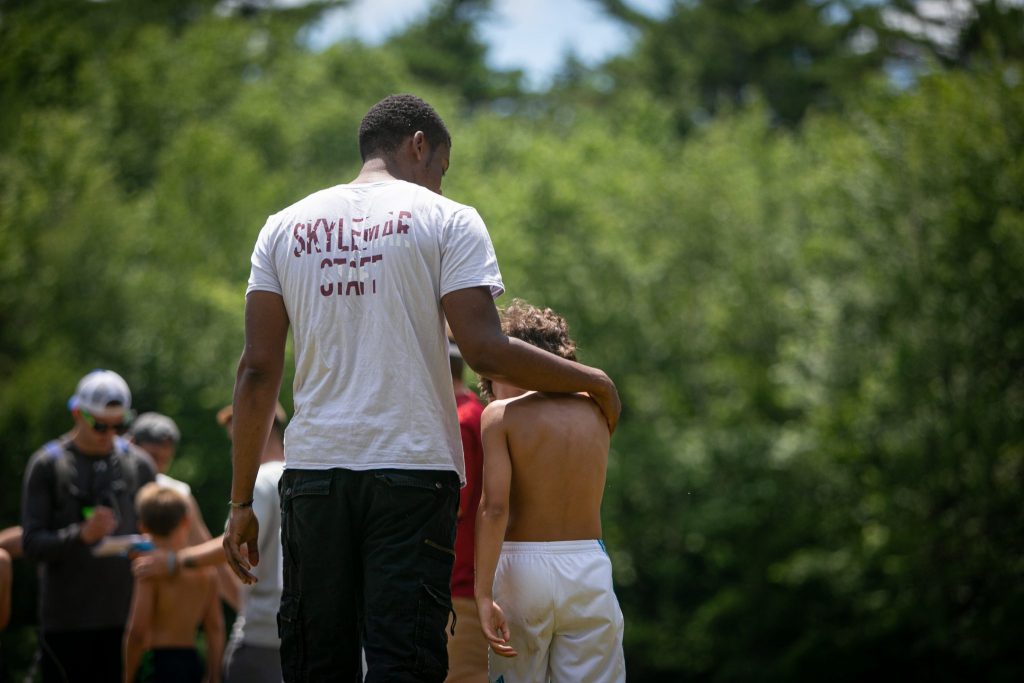 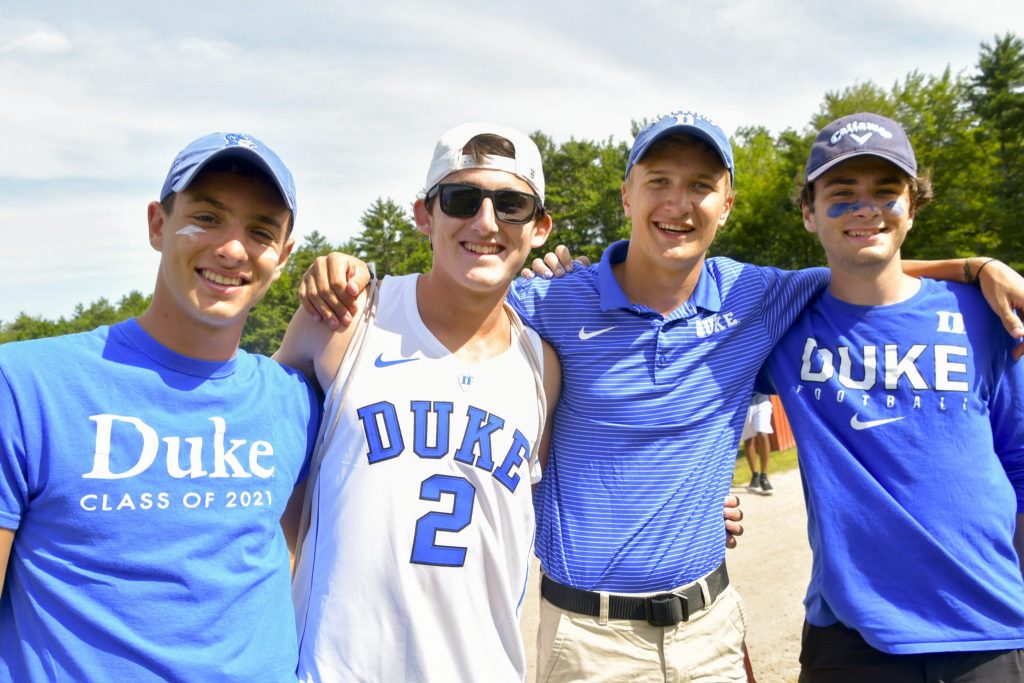 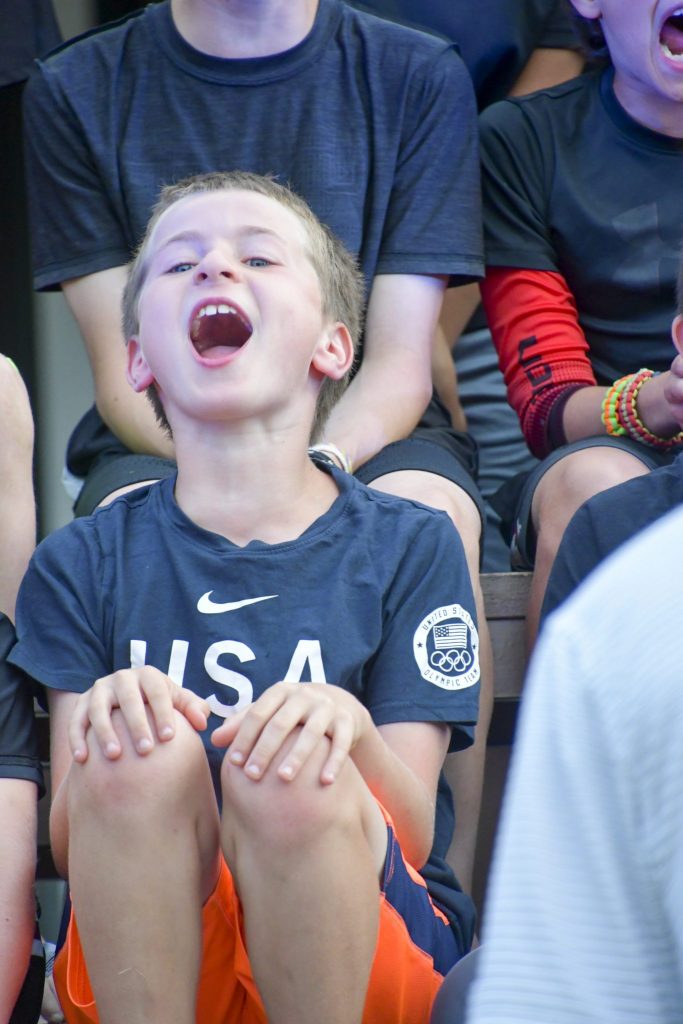 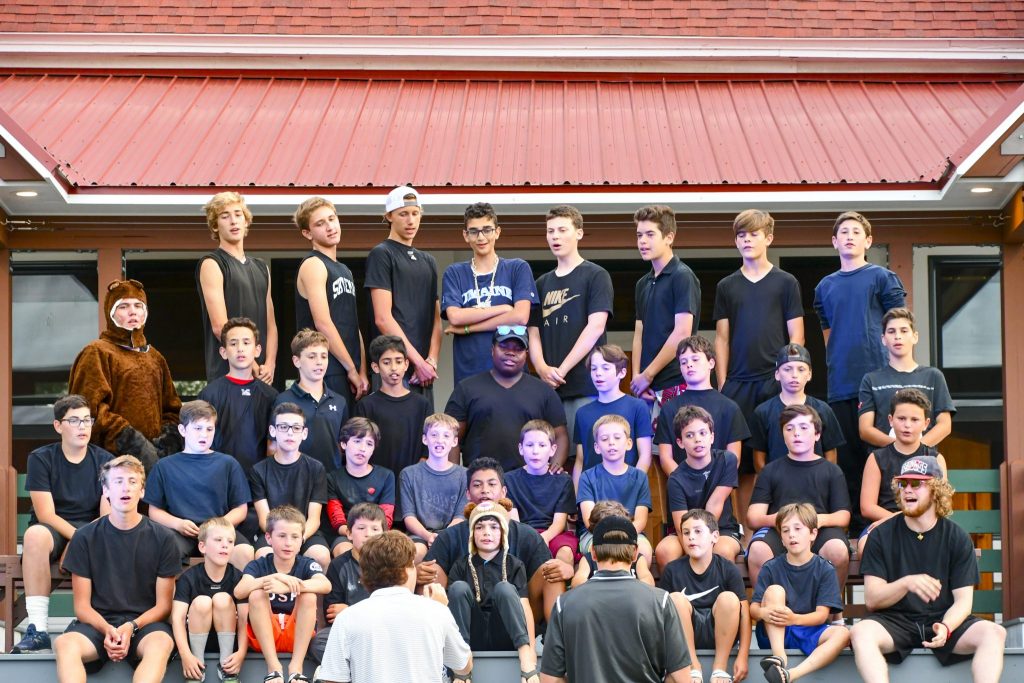 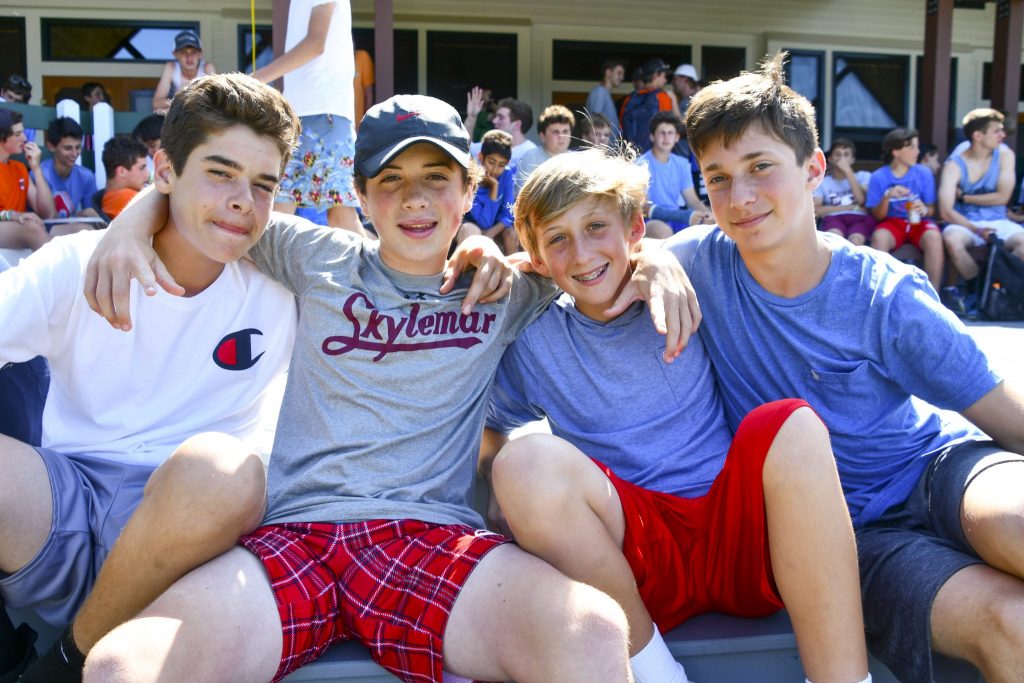 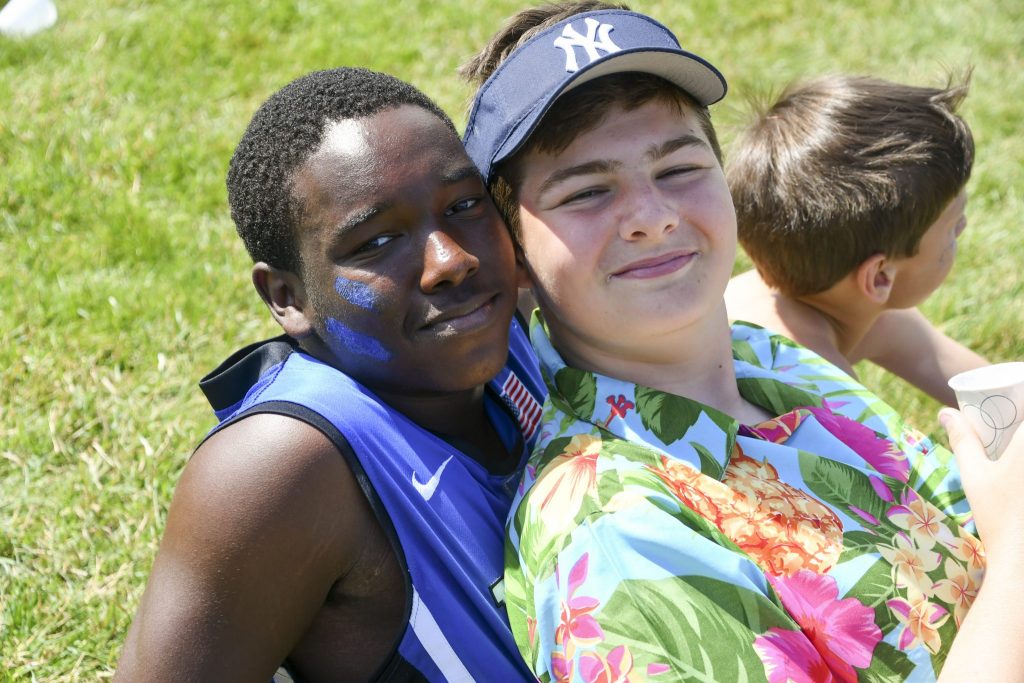 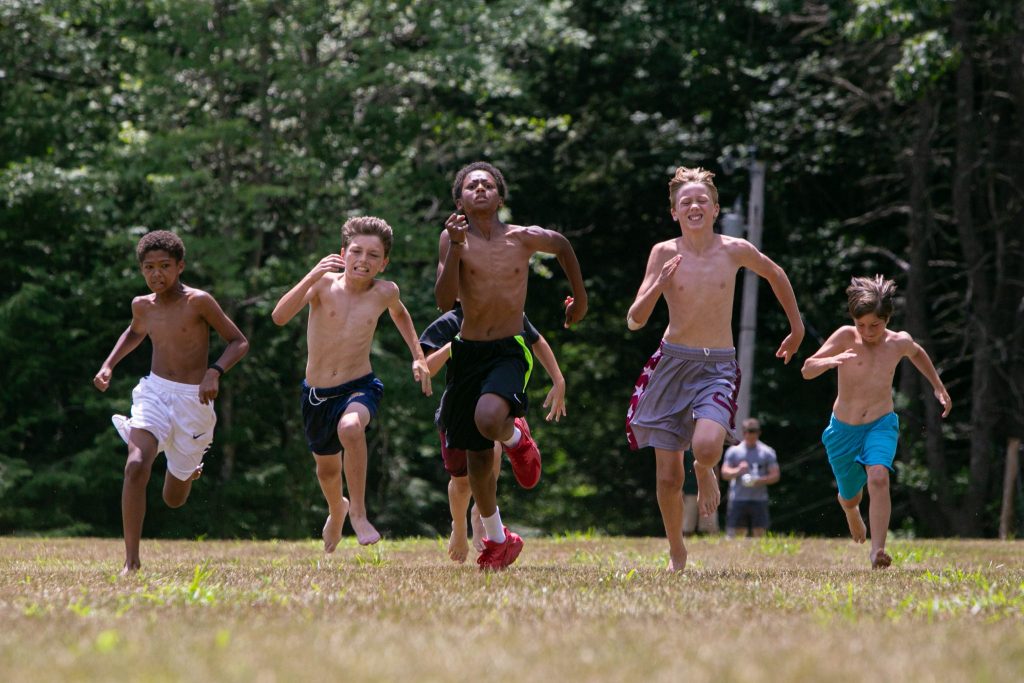 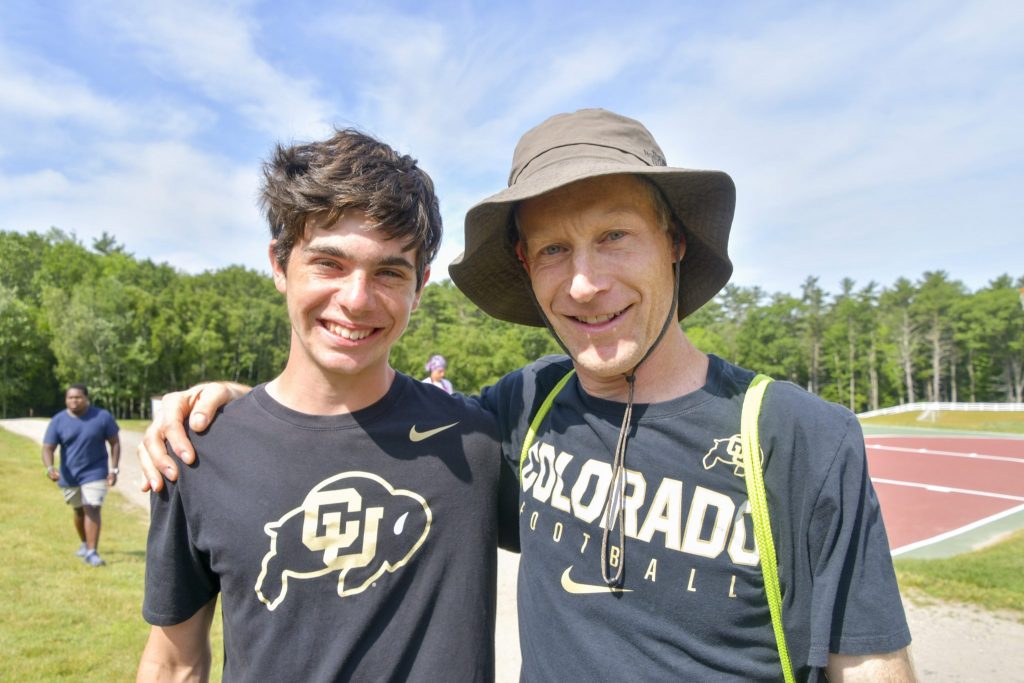 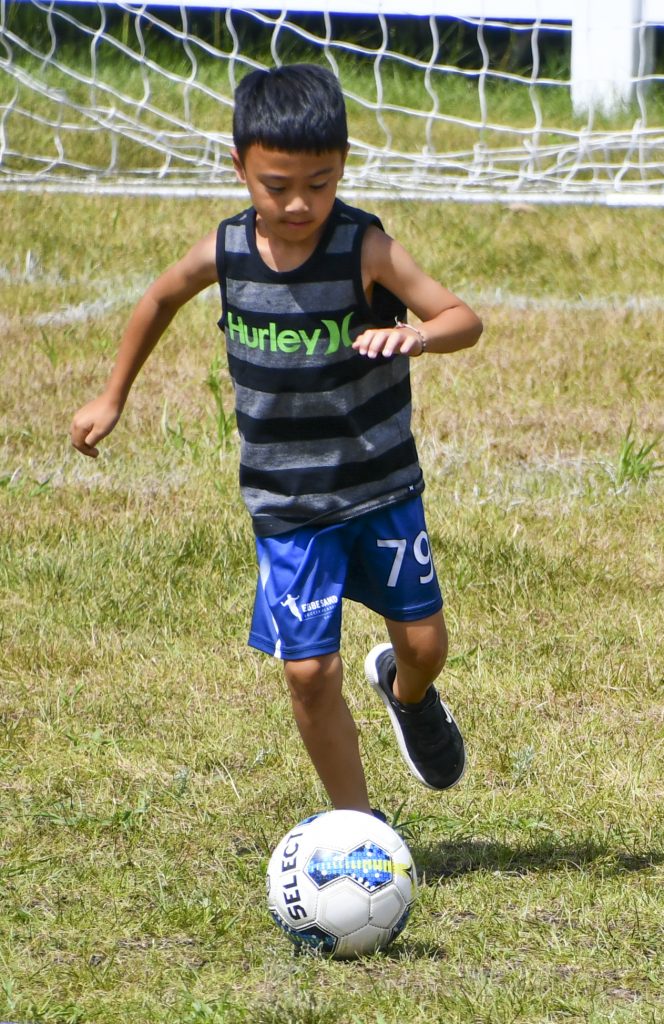 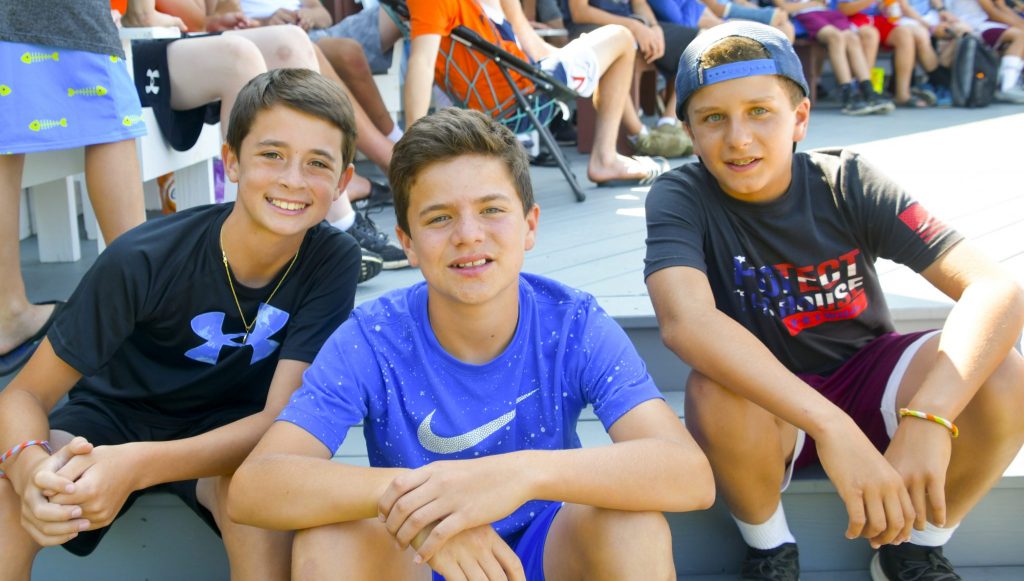 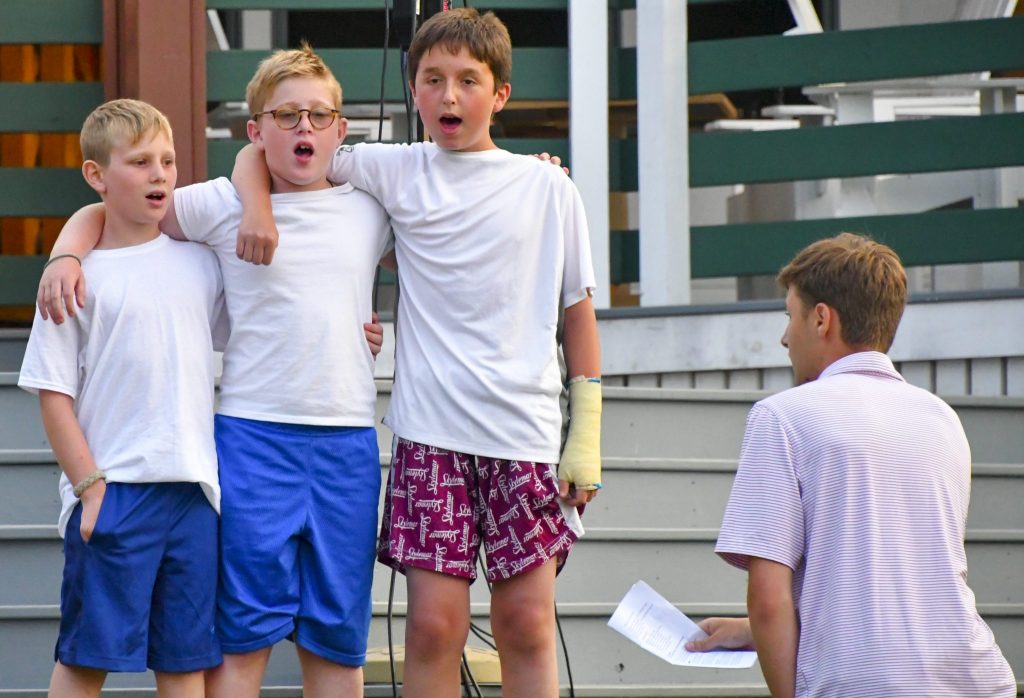 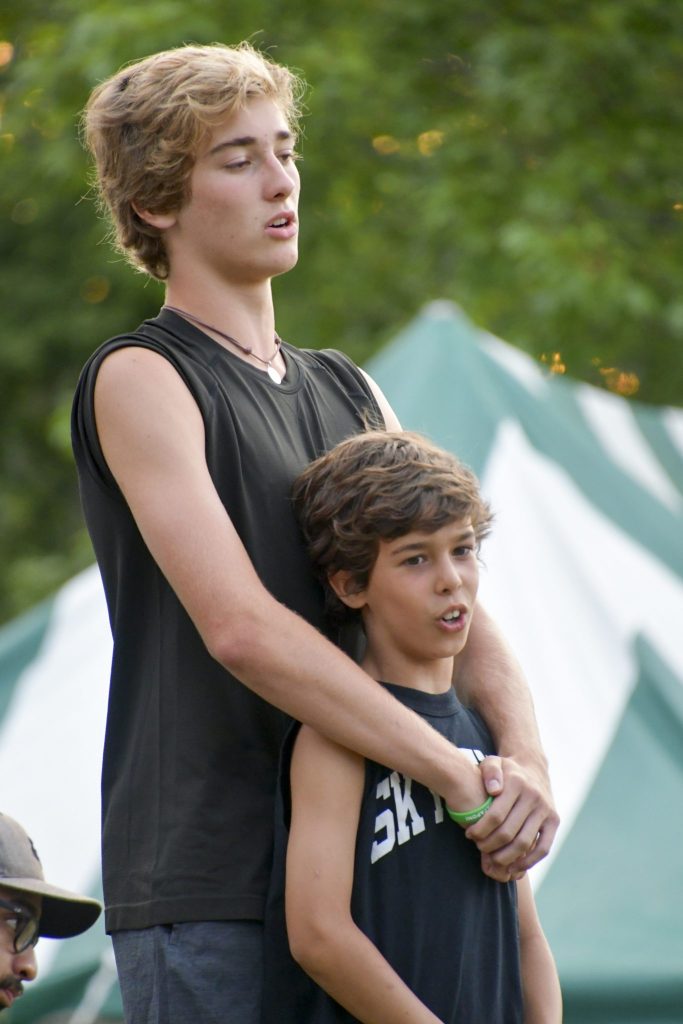 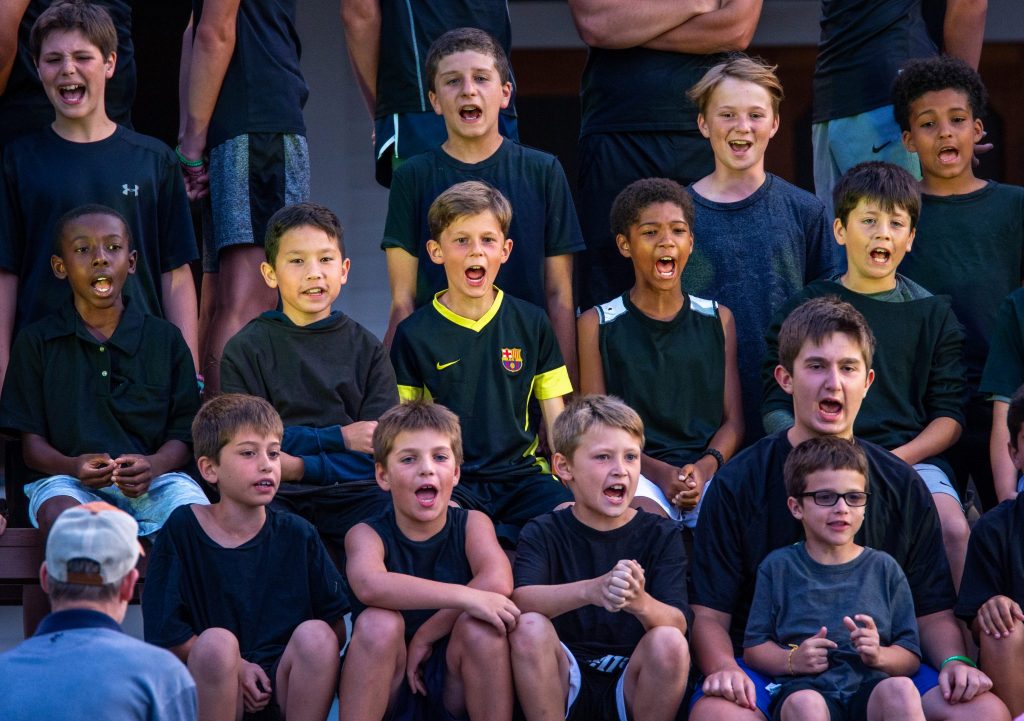 What do Buffaloes, Bison, Blue Devils, Wildcats, Black Bears and Blue Jays have in common? Well, let’s see… other than the Blue Devils, they’re all animals.  Nope not it…. These are the team mascots of the 6 colleges represented in the 2019 edition of one of our oldest traditions, Intercollegiate Day.

The 4 classes (Freshman: Bunks 1-6, Sophomores:  Bunks 7-15, Juniors: Bunks 16-23, and Seniors: Bunks 24-30) were divided up between Colorado, Bucknell, Duke, Kentucky, Maine, and John Hopkins Universities.  These were the schools chosen by their counselor leaders to compete in this, the 71st version of a day filled with athletic events, and night filled with Songs and Cheers to determine the overall IC Day winner.

Some sports, such as Basketball (free throw shooting) and Golf (long-drive) were competed individually, while others require the efficiency each team’s class working together to display their skill, accuracy and speed in timed events relating to that particular sport.  For example, in Baseball, the boys took a position on the field and were timed on how quickly the group could get the ball from pitcher to catcher, “around the horn” in the infield, then to each outfielder and back to the plate.

After breakfast and inspection, a spectacular Maine day greeted the participants when Shep gathered the teams at the Hoop courts for the customary opening of this special day – watching the Senior sharpshooters first before moving on to compete in Soccer, Football, Baseball and Lacrosse.  The best free throw shooters among the classes were Bucknell senior Elijah, Juniors Harrison S (Kentucky), Josh Sw (Duke) and Josh B (Colorado), Sophomores Lucas V (Bucknell) and Mason M (Duke), and Anders (Kentucky), Ollie (Colorado) and Jared F (Duke) in the Freshman class.

Once everyone had completed the 4-sport rotation, all teams headed to the Snow Field for the Dash, one of the most celebrated of all IC day events. Nick Shep set the scene and called the runners to the starting blocks.  One sprinter per class for each team gave it all he had in a true test of straight speed, resulting in four of the best races seen in years.  After Semaj pulled away in the Frosh race to win for Bucknell, a trio of Kentucky Wildcats claimed the other 3 races – Soph Sam D and Junior Ty won tight races, then all watched Senior Jalen prove once again that he’s “the fastest man in camp”.

We shifted out front of the Rec Hall to Sky Links for another favorite – the annual Long Drive Competition.  Selected duffers from each team teed it up and let it rip – Duke’s Charlie Sh and Colorado’s Jack B looked PGA-ready with the two longest of the day.

With the daytime activities complete, all attention turned toward the evening closing event – Songs and Cheers.  Actually, this IC Day finale began long before the actual performance itself, as each team’s counselor leaders have been writing and preparing their set of 5 songs (Team cheer, Camp cheer, Team fight song, Old Camp song, and Original Camp song) into the wee hours for days to get ready.  Beginning last Friday evening, we squeezed in 5 rehearsals sandwiched around Saturday’s Visiting Day - all for the purpose of putting on that one best performance that might carry their team to victory.

And what a magical night it was.  Under the light of a nearly full moon, the spirit of Skylemar came shining through.  The Team Fight songs and both cheers (Team and Camp) were energetic and lively, the Original Camp songs creative and heartfelt, and the Old Camp songs poured out with a pride several generations strong.  31 “collegians” performed as soloists/duets/trios/quartets amongst the 6 presentations – with teammates, bunkmates, counselors, and brothers locked arm-in arm.  Necks strained and voices cracked, but somehow this was still the greatest show on earth!  “Too tough to call – no clear-cut winner” was the common buzz throughout the crowd when judges Gordo, Matisi, and Adam Shep were huddled backstage with the task of deciding this one...until a few moments later when they handed Shep their decision.  The crowd hushed with anticipation just before Shep proclaimed the 2019 IC Day winner…BUCKNELL!

“My son has gained so much self-confidence while learning new skill by attending Camp Skylemar. He has developed better social skills (communication skills/ conflict resolution ability).”