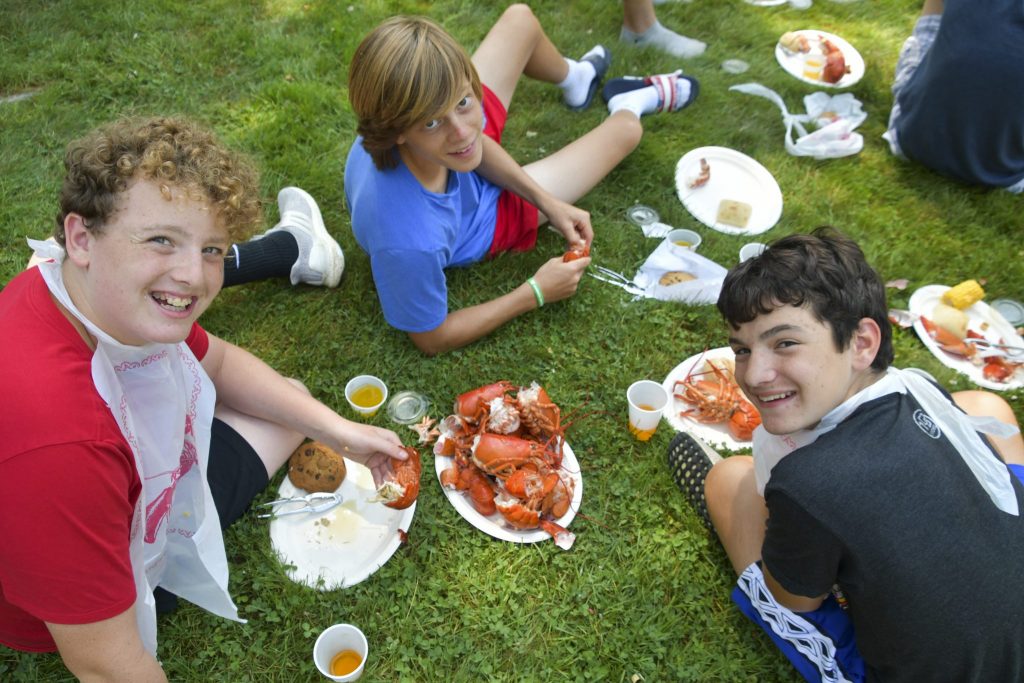 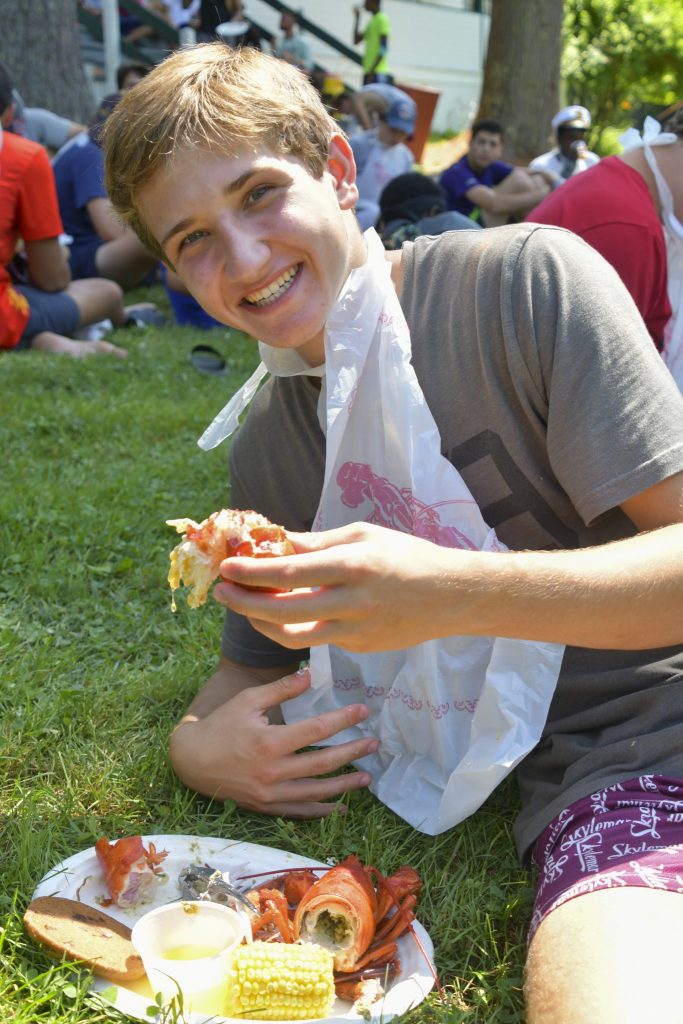 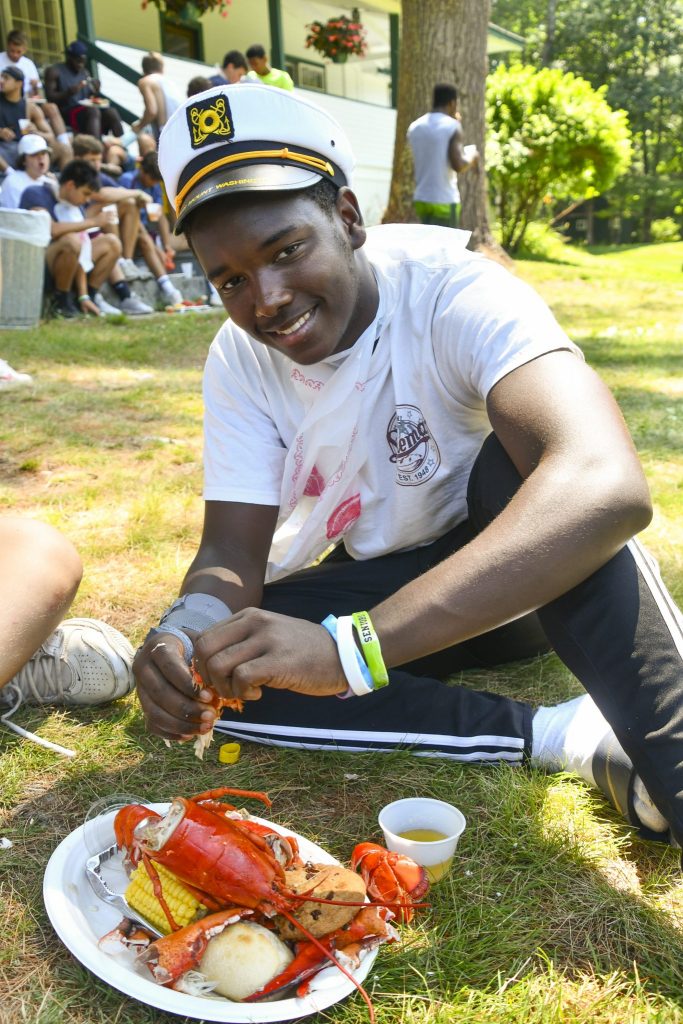 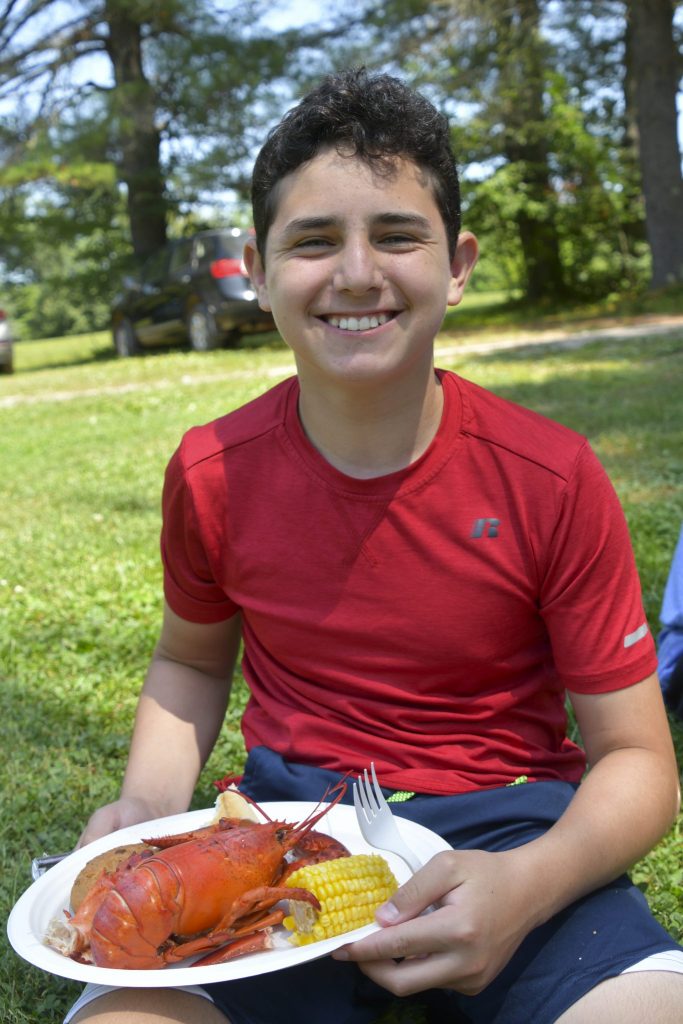 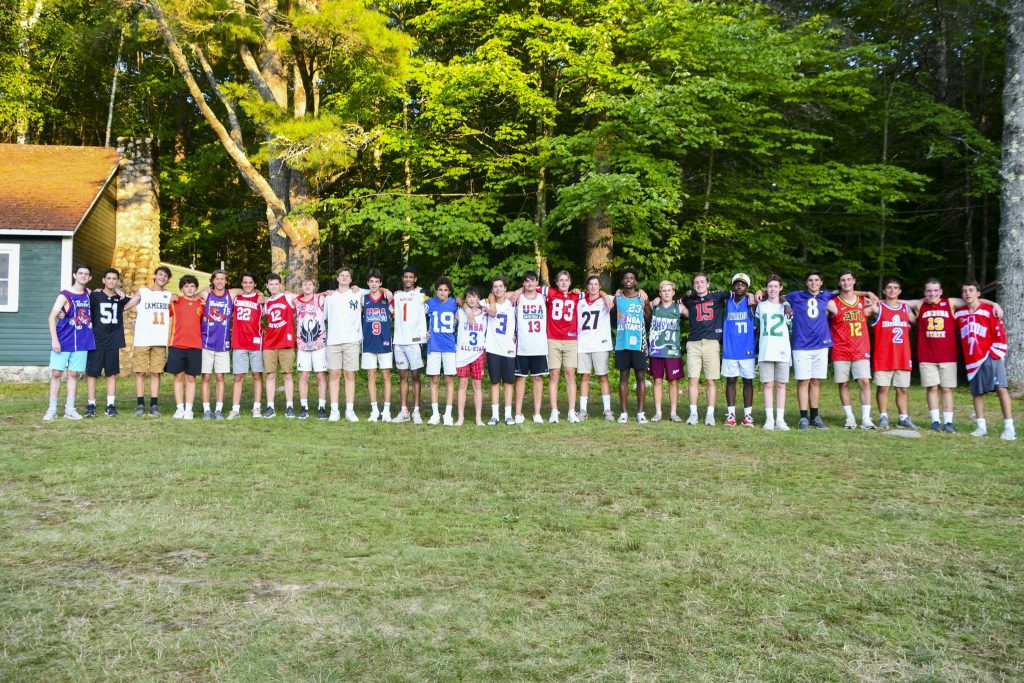 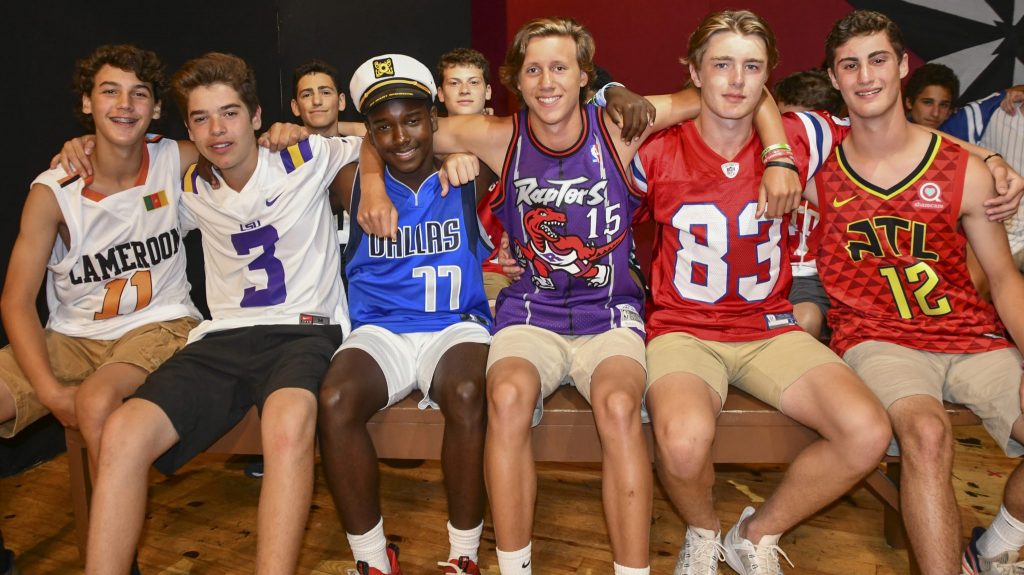 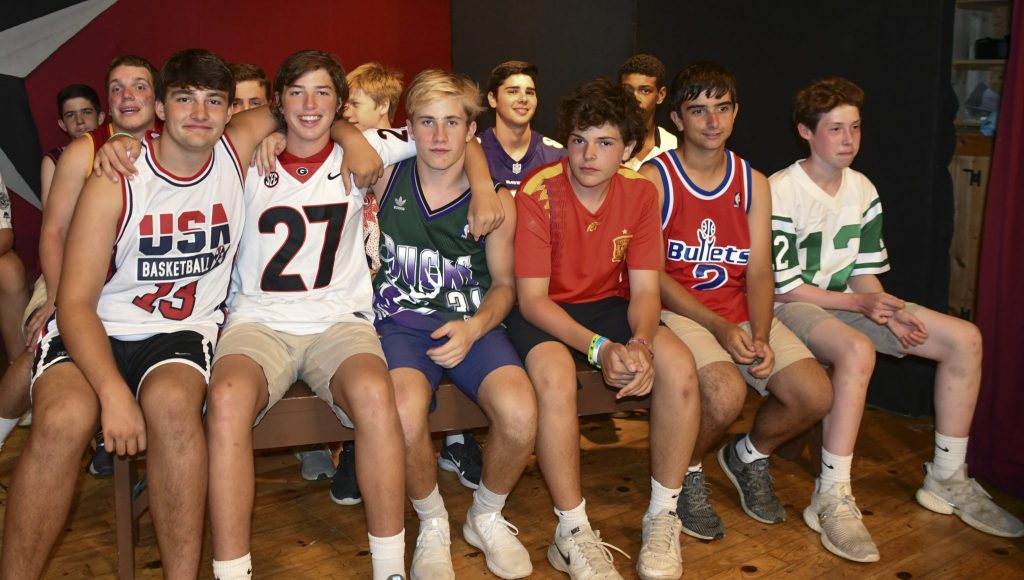 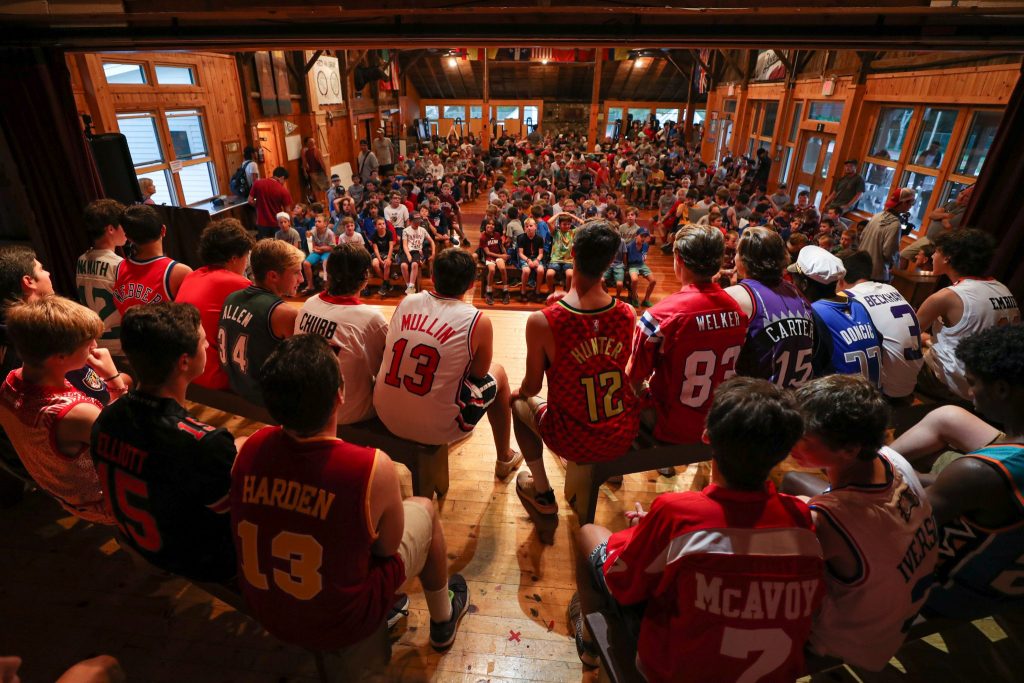 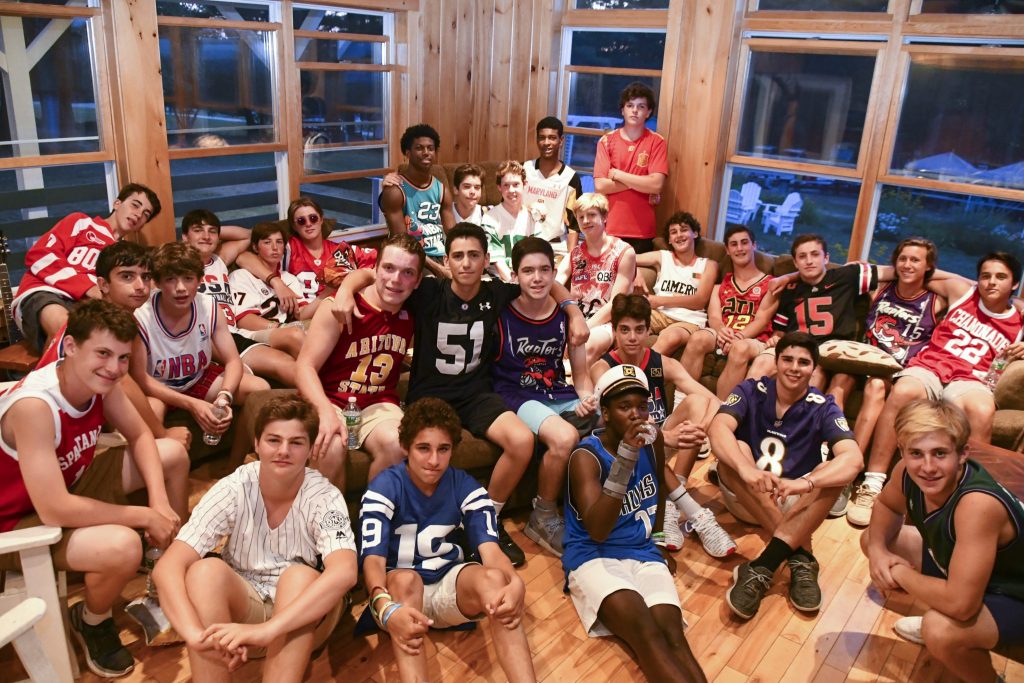 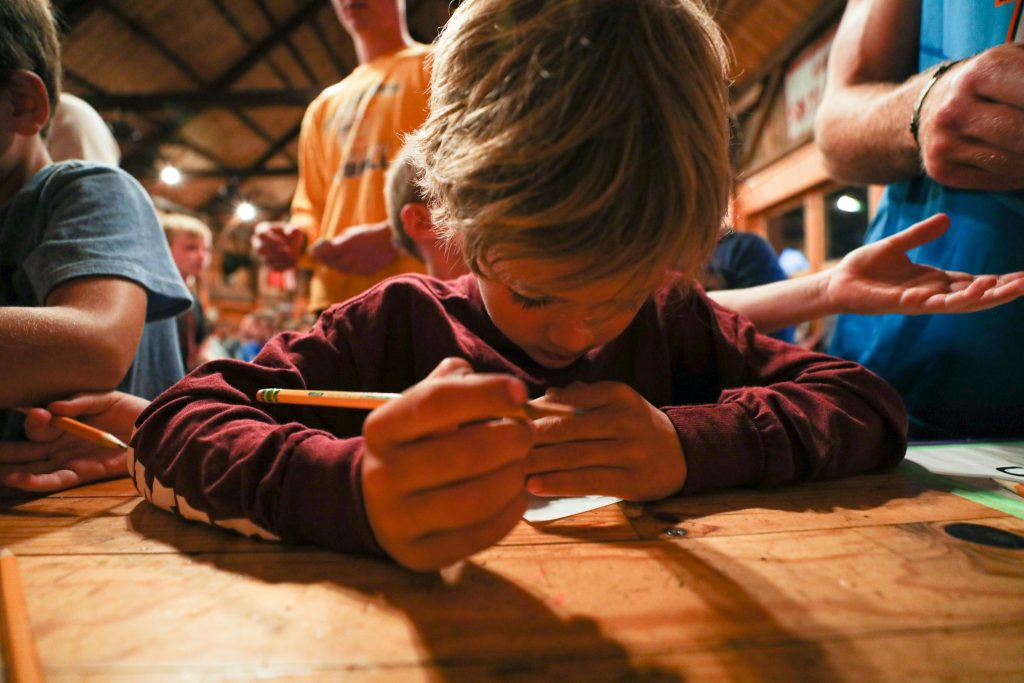 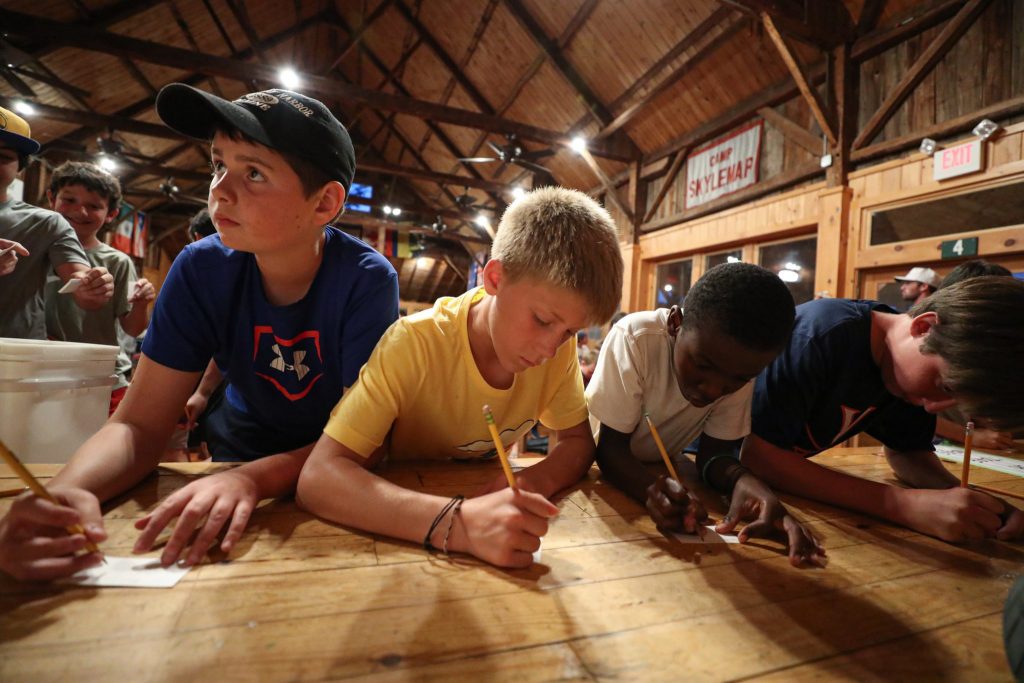 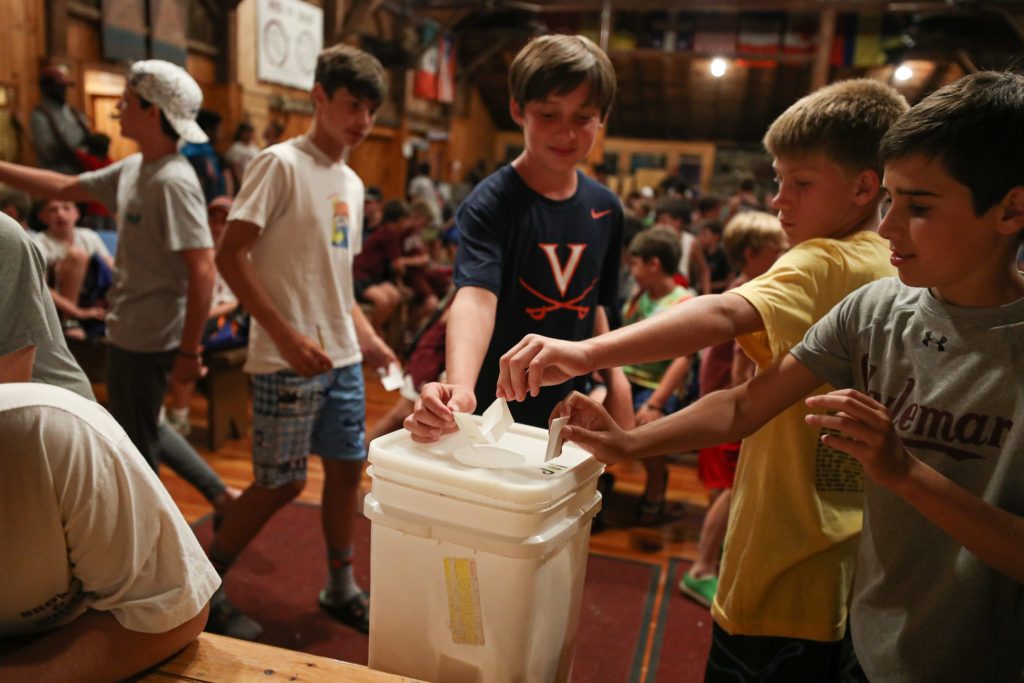 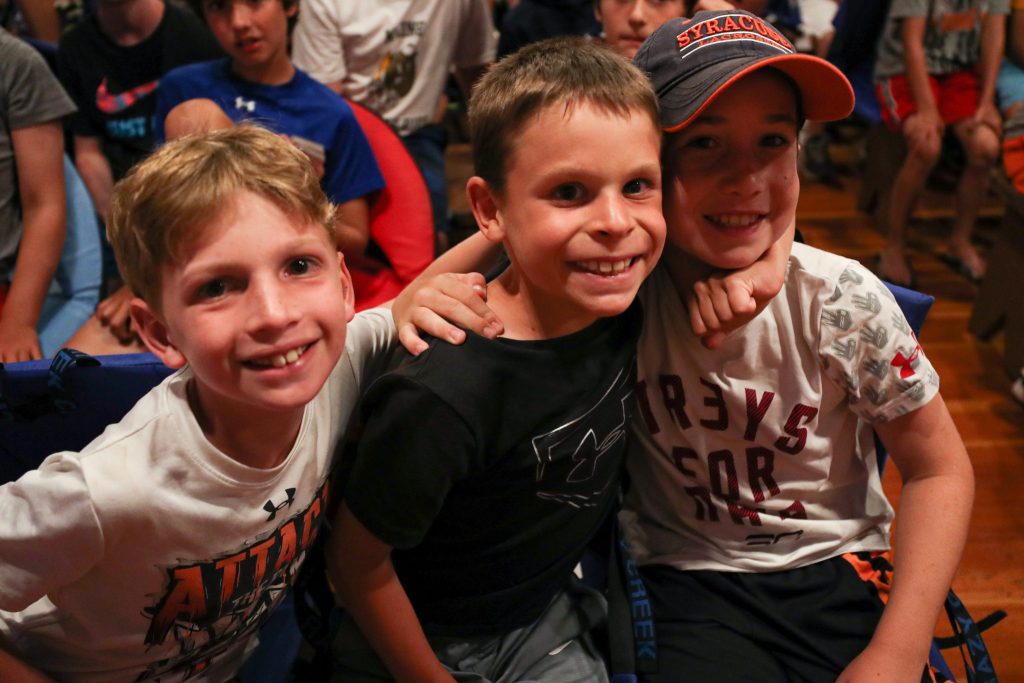 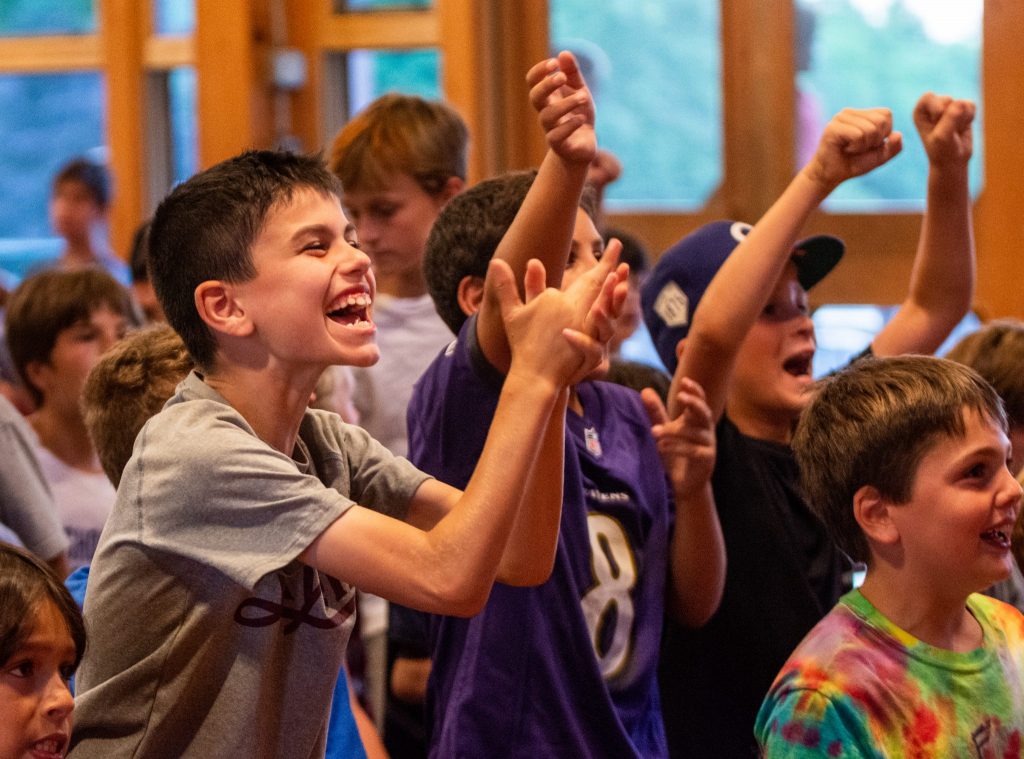 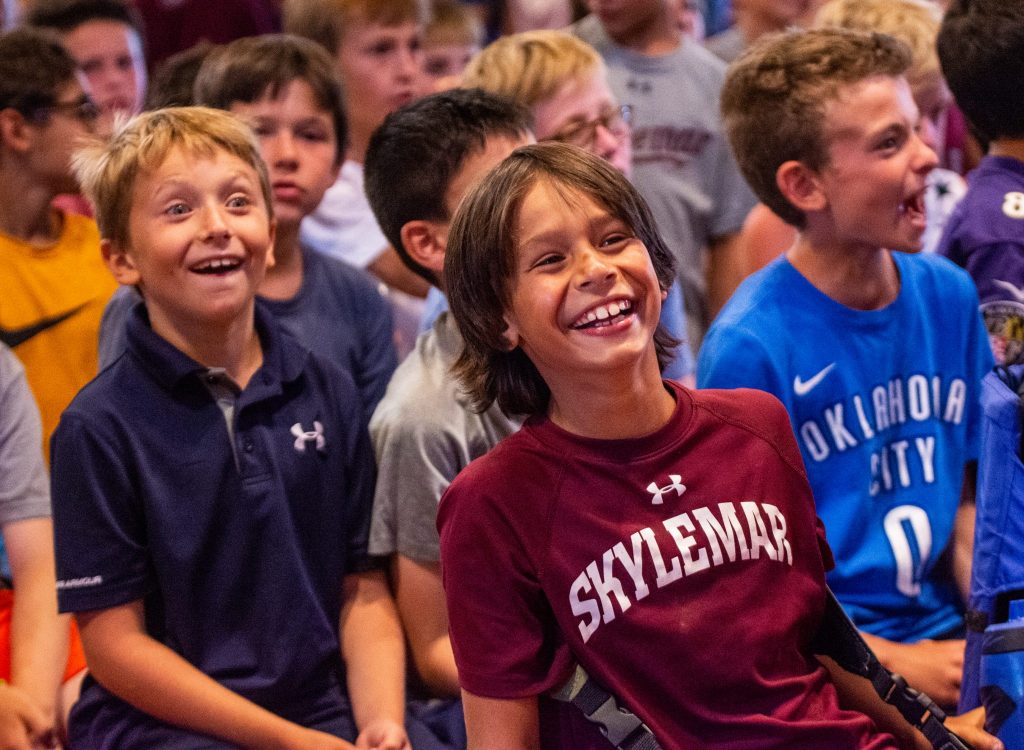 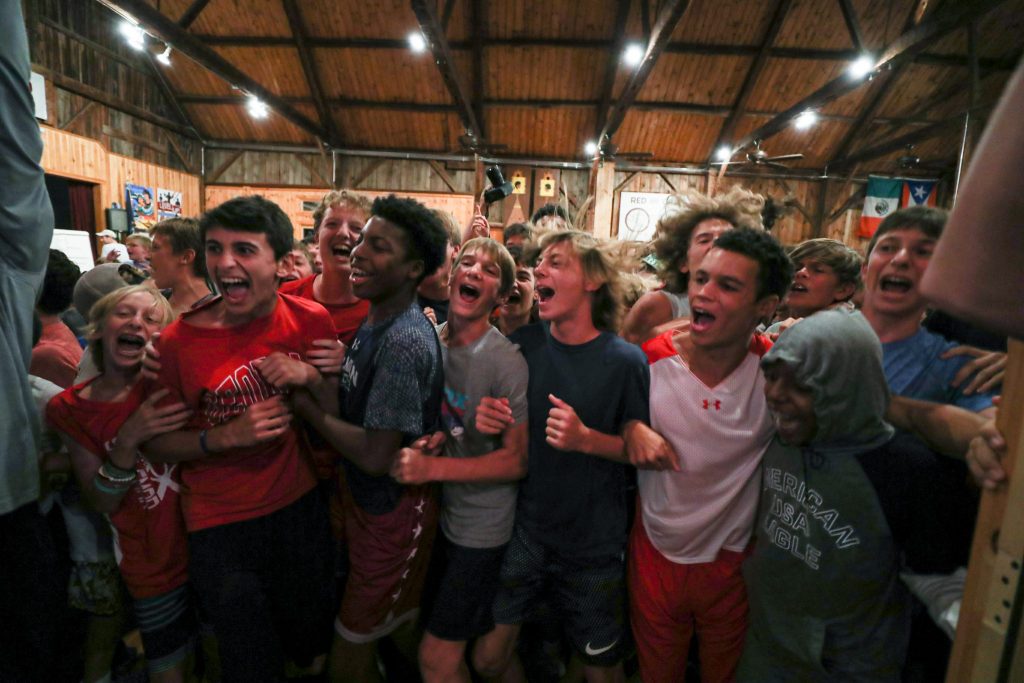 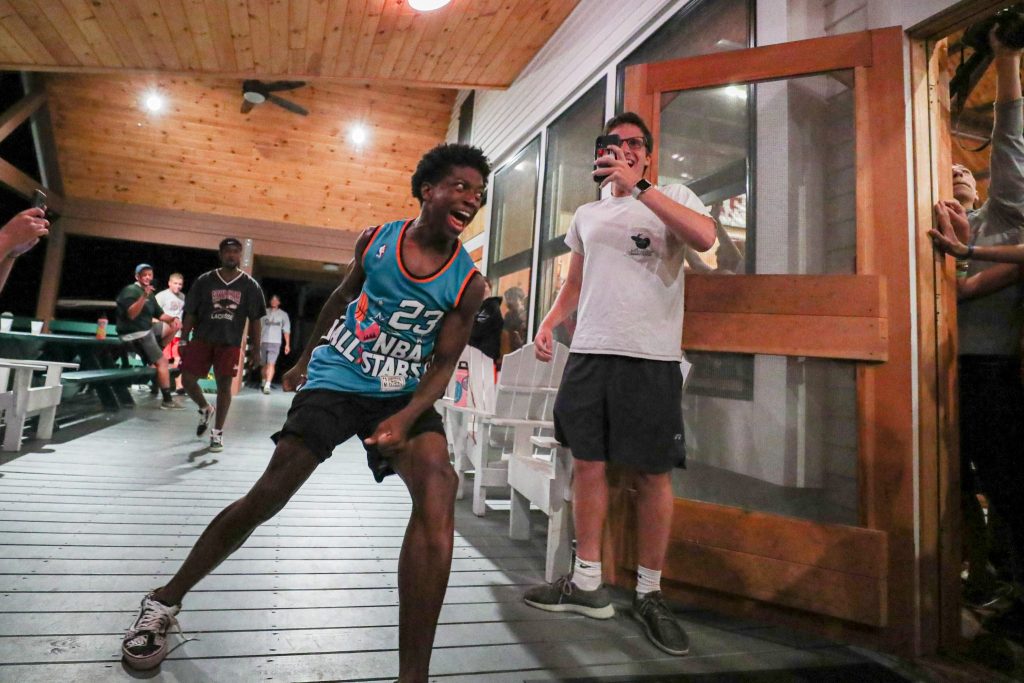 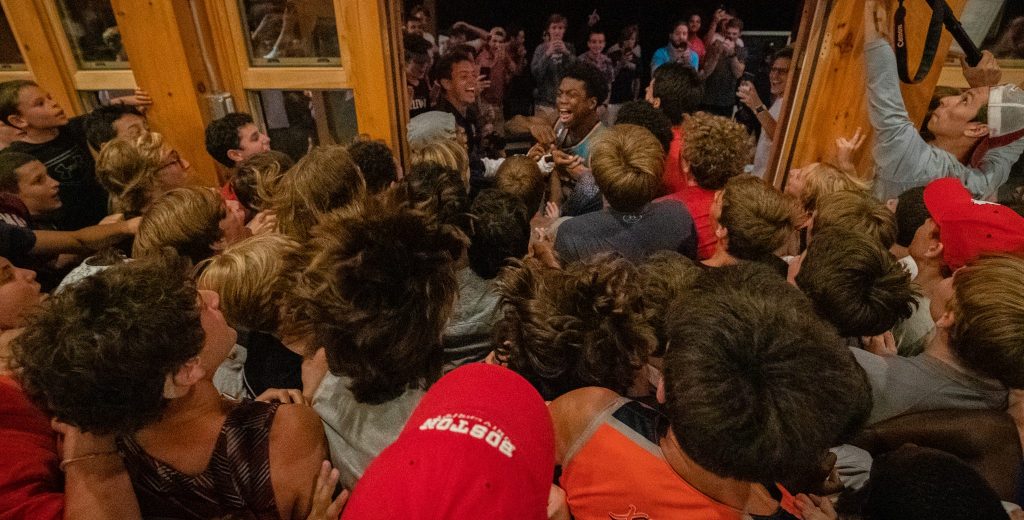 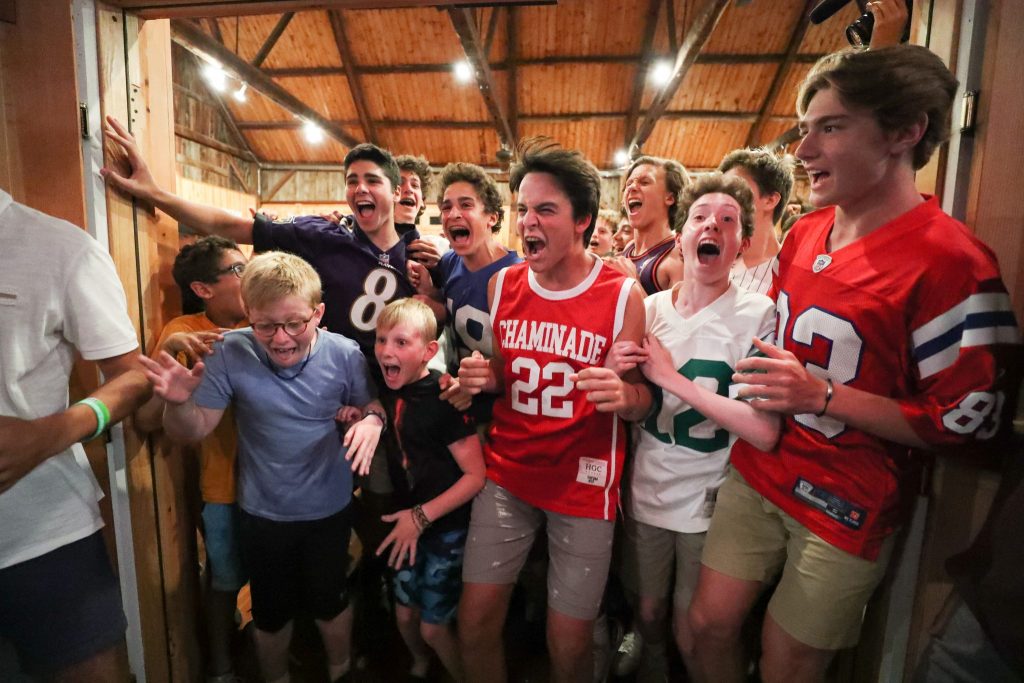 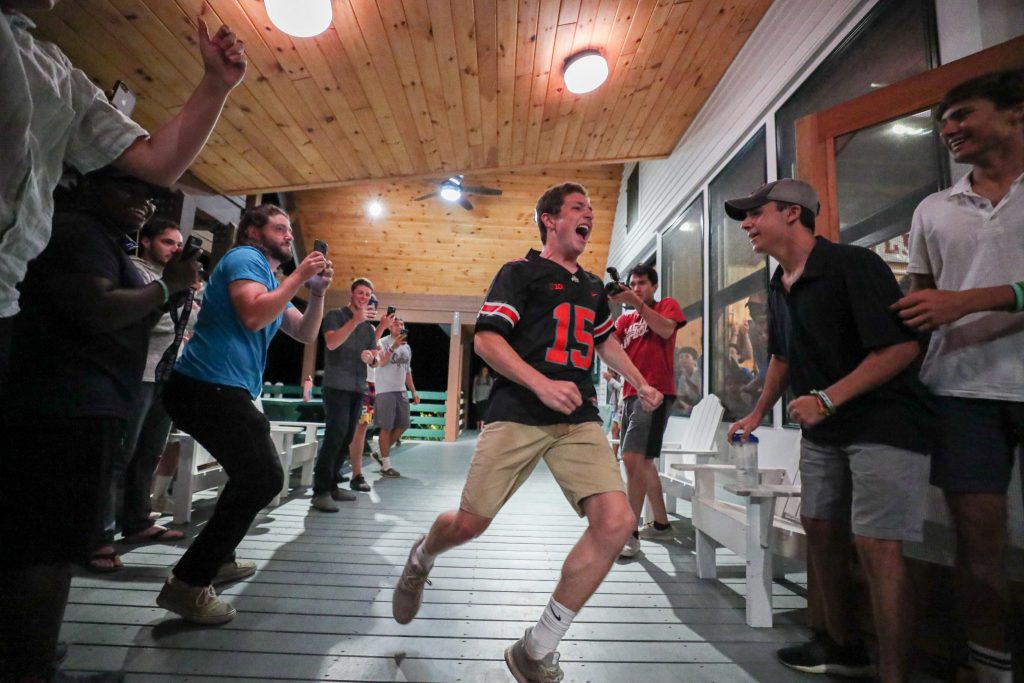 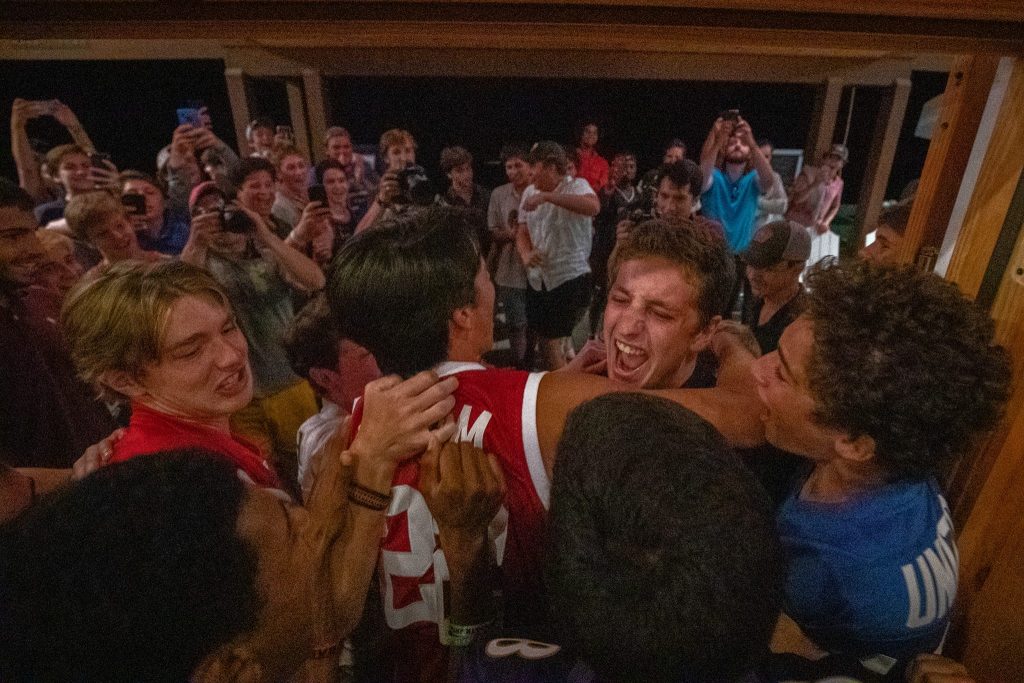 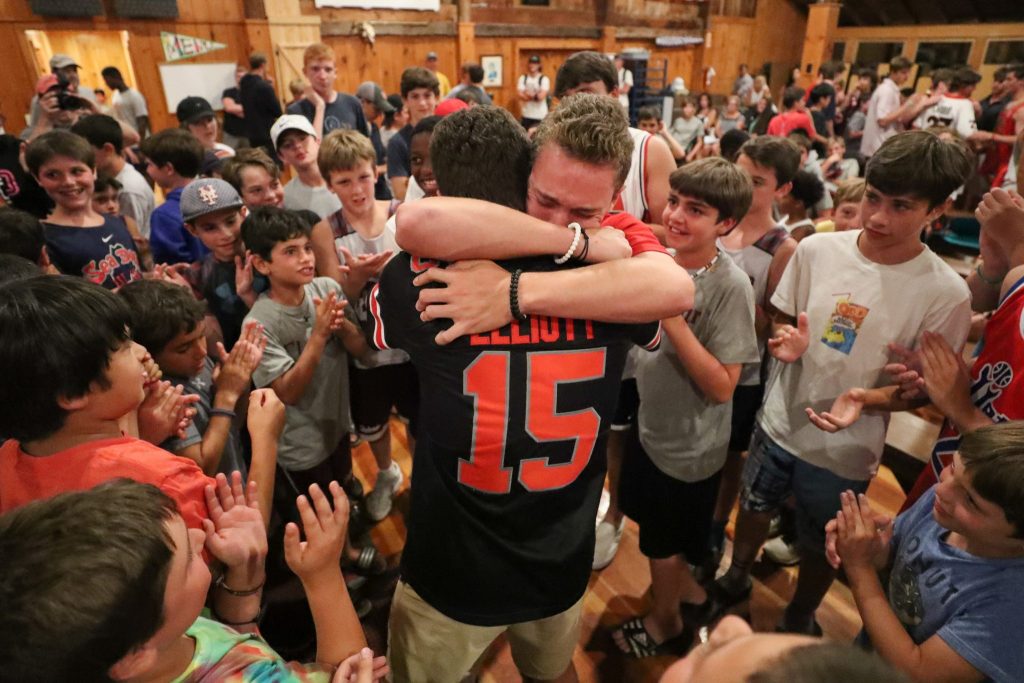 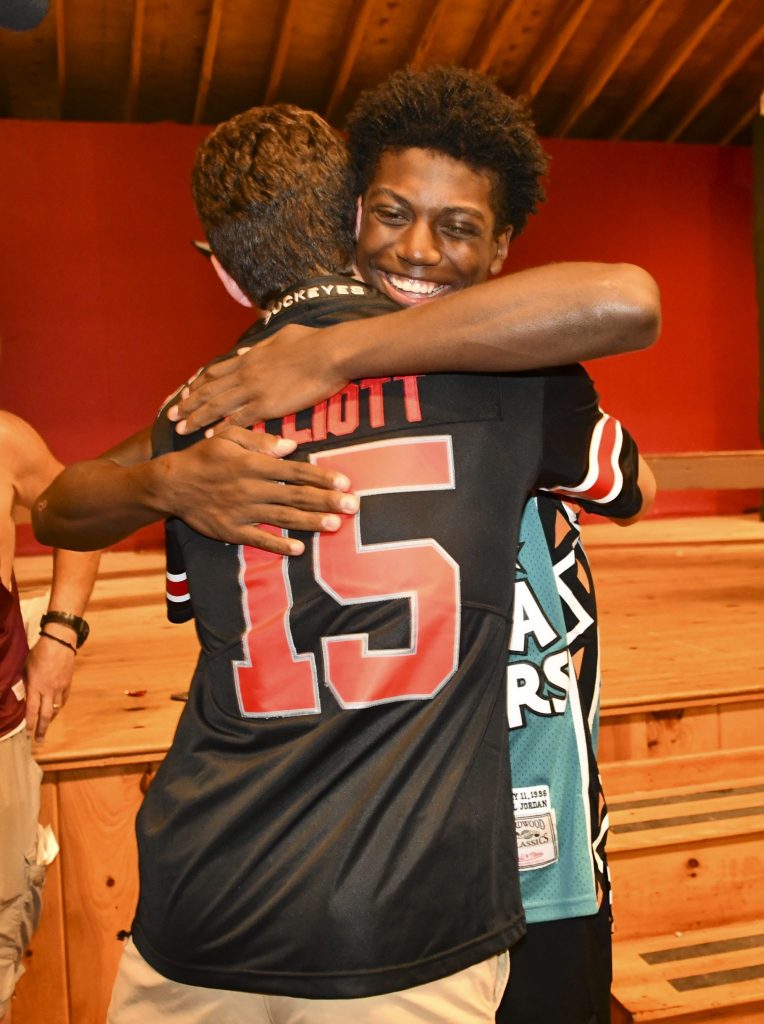 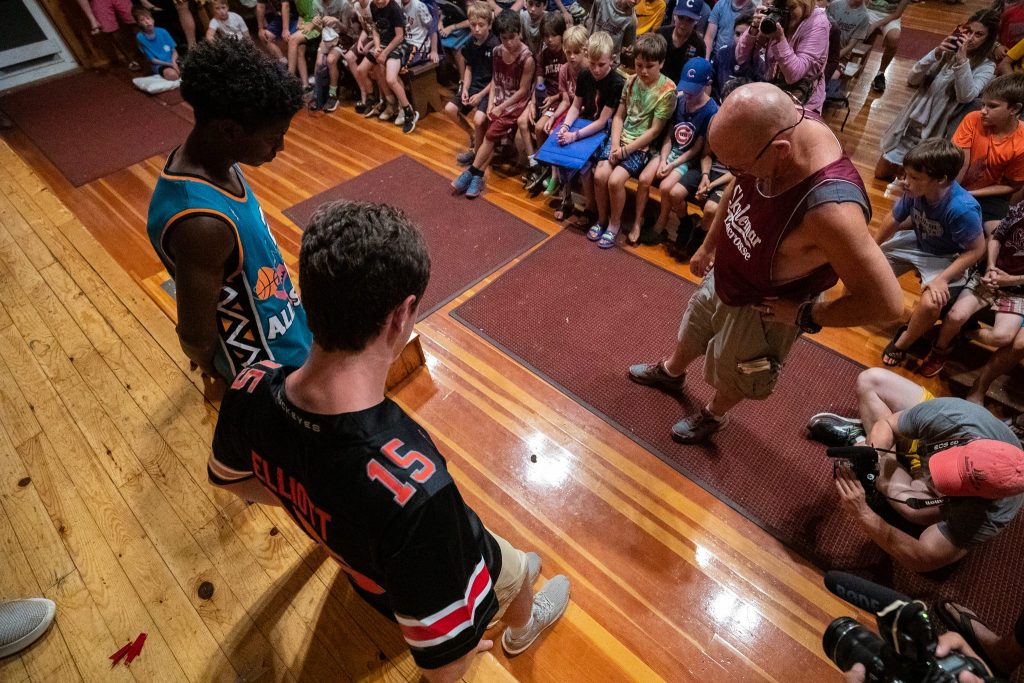 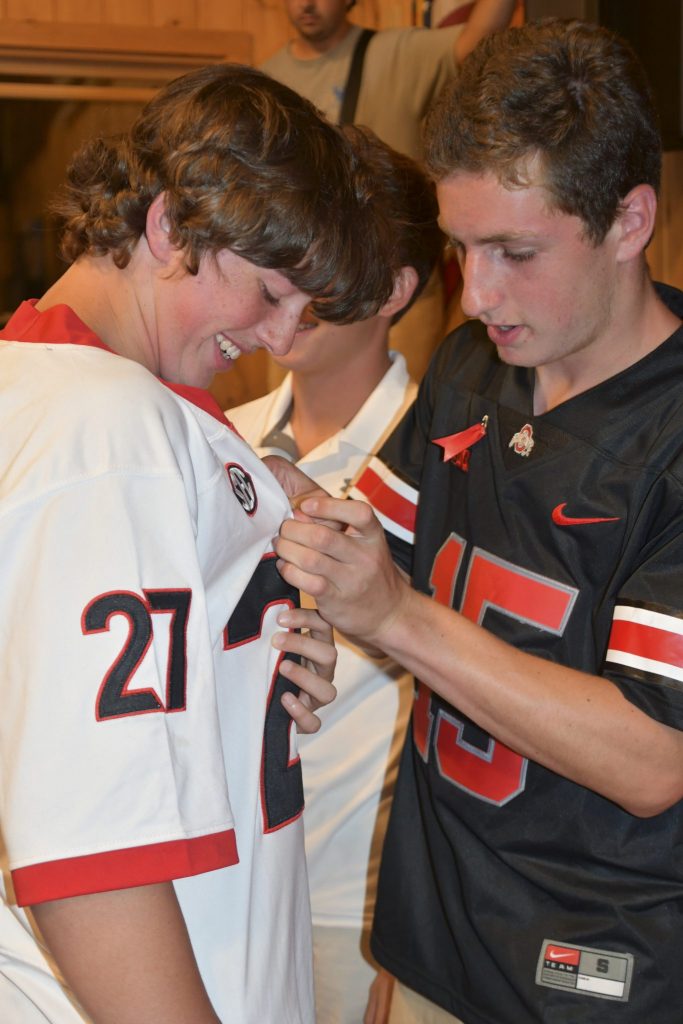 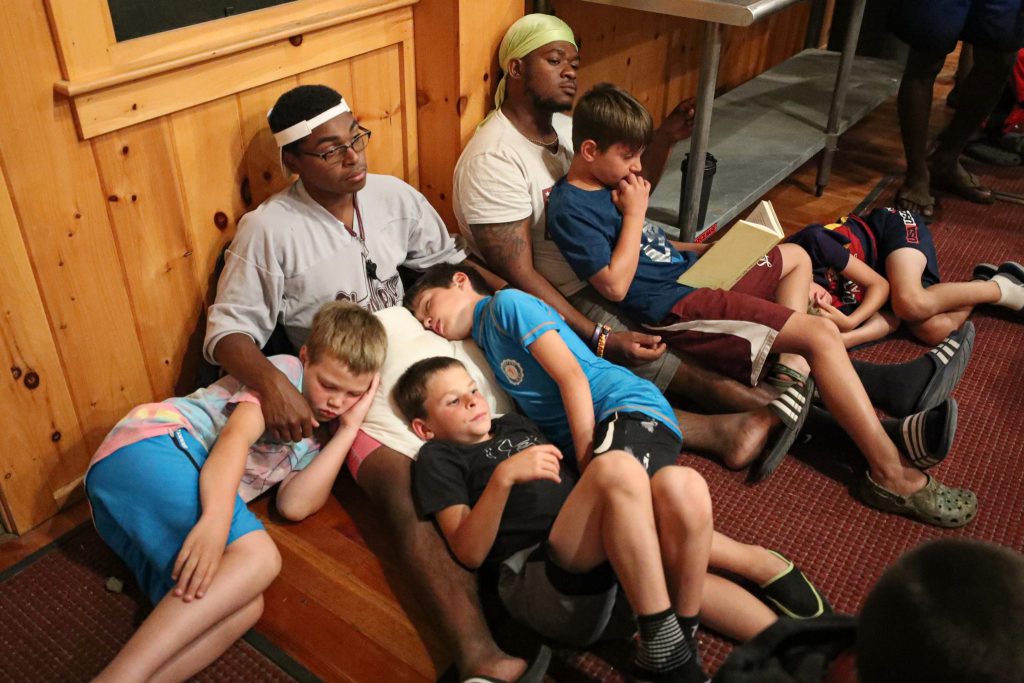 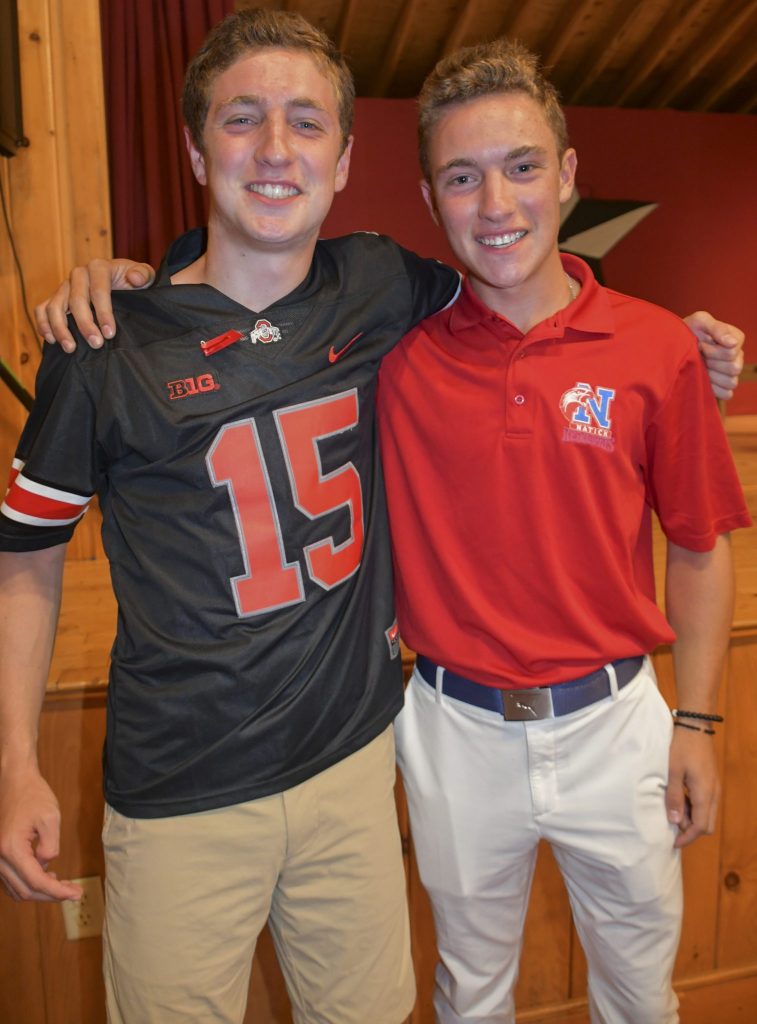 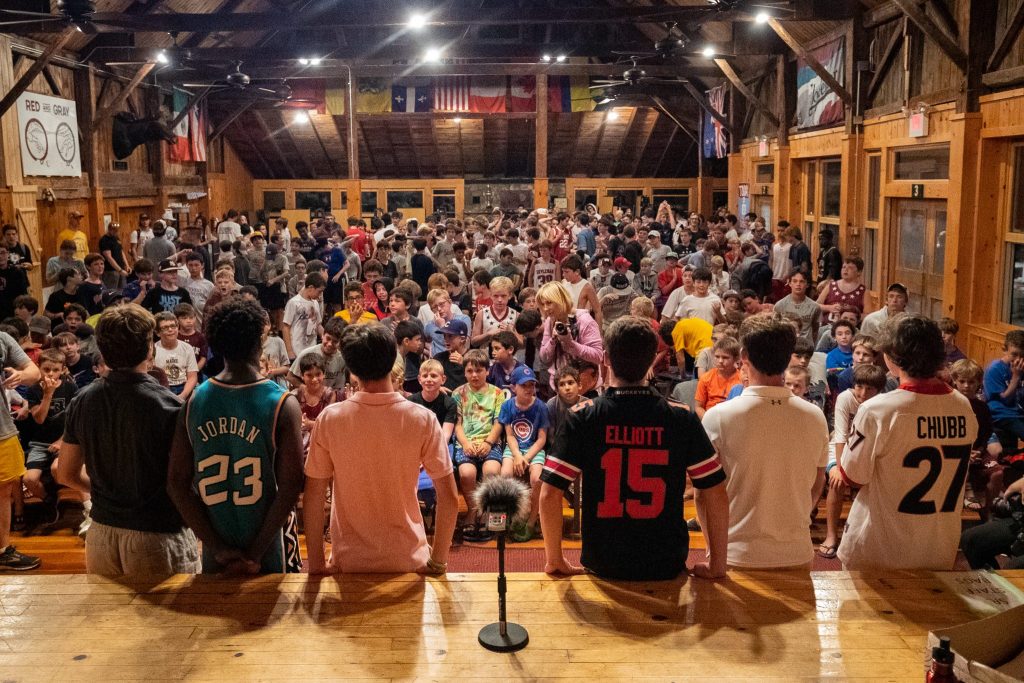 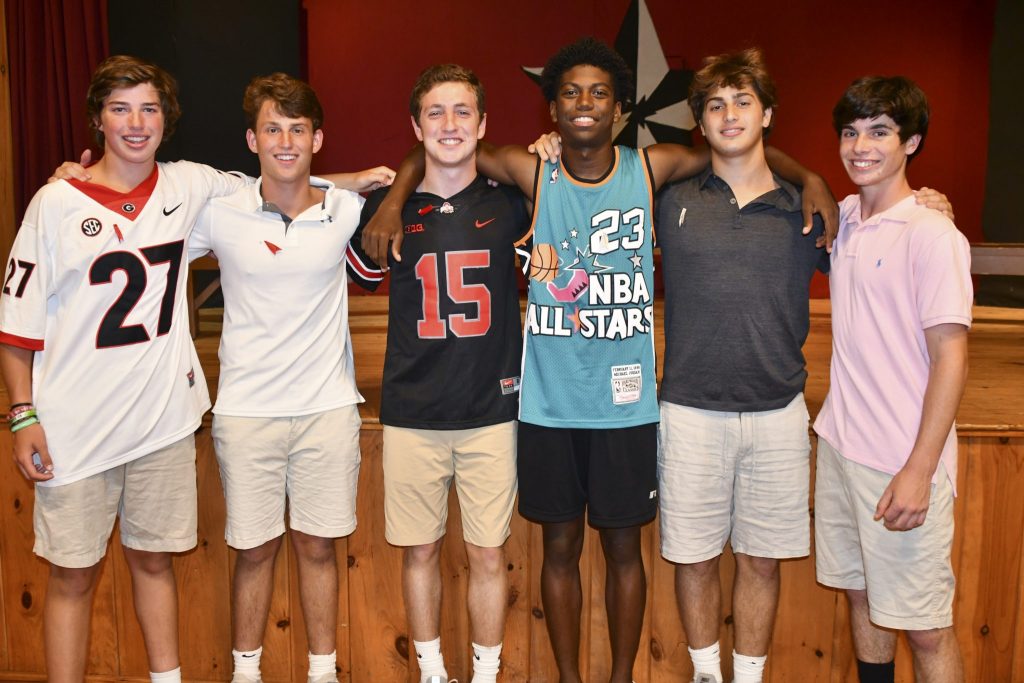 Twenty-seven outstanding young men, two of whom will be elected as Skylemar leaders.  No lofty campaign promises or electioneering here.  Instead the candidates are authentic, honest, committed and dedicated.  The voters make thoughtful, educated decisions.  After all, they’ve lived with the contenders for many weeks.

A simple majority wins.  It takes one more than half of the constituencies.  In the “country” of Skylemar, the magic number is 111.

Best part of this election is the voters can’t go wrong.  Every option is a wonderful person, ethical and kind.  If only the outside world would just take a look at how it’s done best at the …

The afternoon began with the annual Lobster Lunch for Sky II, signifying that the time was near.  There was excitement and anticipation flowing through the sky-blue lakes and swaying trees.

At 7:45 pm, the camp was assembled in the Rec Hall.  We faced the flag and recited the “Pledge of Allegiance”.  It was an awe-inspiring way to begin, with hundreds of voices joining as one.

“Welcome to one of Skylemar’s most coveted traditions… the election of your Color War captains!” Shep proclaimed.  The crowd roared with enthusiasm.

He spoke about the origins of the election, and how Lee and Herb’s intent was to allow the participants to decide their leaders.  No adult engineering or direction – it’s all up to the campers.

The spirit of Skylemar guides Color War.  The foundation is based on fair play, friendship and that it’s Cool2Care.  In fact, it’s fine to care about winning and playing your hardest in order to do so...  but you must play within the rules, and you may not ruin someone else’s fun by overreacting.

In fact, ours is a very unique competitive situation.  It’s different than other places, because everyone who’s competing truly cares about those who you’re playing against.  It’s far more than just a matter of respect.

Skylemar Color War happens outside the bunk.  Because the teams are drafted by the captains, brothers and close friends could be divided.  One bunk could even end up with four campers on one team and just one on the other.  It’s imperative that we show that we care by keeping Color War on the fields, courts and stage.

Before presenting the candidates, Shep introduced the many alum who traveled great distances to be a part of this special evening.  He then recognized the seven former Color War captains in the room, some of whom are current counselors; the rest were alum.

Then he asked those who were on the ballot at some point but did not become Captain to please stand.  Many rose to their feet and called out the number of years they had been to camp.  “Nine", said one.  “Five", said another.  “Eight", chimed in one more.

“Camp”, Shep continued, "This is your Hall of Fame.”

On the stage were the 27 Senior campers, each proudly wearing his lucky jersey.  “These are your candidates”, Shep declared. “You guys in the front row should grow up just like them.”

Each camper and JC voted for two.  The Seniors went first, then headed to the Garden Cabin isolated for the duration.  Next, each camper came forward to the stage to cast his own vote for two.  One by one, Shep read each ballot while George kept the tally for all to see.

When the vote count for one neared the magic number of 111 (votes needed to win), the countdown began.  The throng had moved closer and closer to the front-porch door in "ready to pounce" position until finally... "Jalen! Jalen! Jalen!" chants rocked the rafters as he was swarmed upon entering the Rec Hall as 2019's first elected captain.

After the excitement had calmed, Shep went on to read the results. Then, just when the next candidate had come within an eyelash of winning, the ballot box was empty... short just one vote of making this a quick and easy night!

But nope, "fast" was not in the cards for this evening.  The whole camp needed to vote again, but this time only for one captain since Jalen had been elected.  The process continued... Shep called out each vote, George tallied, but again, no one reached the magic number.  What a testament to the quality of our ballot – lots of guys got votes!

A third round of voting was set to begin - however, there were clearly two front-runners.  This time each camper was to vote once for either Ethan or Shuey.  Challenge was by now it’s 10 pm, and little guys were falling asleep on laps and the floor.  Shep read and the votes were counted, but the two remained neck-and-neck for the longest time.

Then finally, as the magic number crept closer, the kids rose to their feet, hands in the air, deliriously screaming “Five More” ... “Three”, “Two”, “One” ... and it’s Shuey!!  The crowd mobbed him at the door!

“Camp”, Shep says.  “These are your leaders - Jalen Marshall and Sam Shuster!"  Even those sleeping woke up to cheer for the Color War Captains of 2019.

The coin flip for color choice went to Shuey, who chose Red; so, Jalen became Gray.  They next picked their Stars Lieutenants.  By another coin toss, Shuey got the first and fourth picks; Jalen, second and third.  Gray selected Spilker and Ash.  Red chose Jack Q and Ethan F.  The crowd reacted with yet another standing ovation.

All sang “Taps”, then greeted the Captains and their leaders as they filed past them on their way back to the bunks... many were carried off to bed.

Getting ready for Elections, with a crumbled shirt in hand, a JC asked the nurse:

“Do you guys have an ironer?”

(not sure if he had the name wrong, or if he meant a mother…)